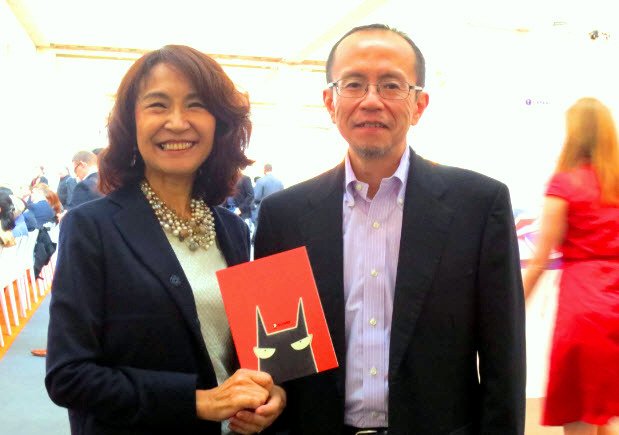 Tokyo’s Discover 21 President Yumiko Hoshiba and Executive Editorial Director Hiroyoshi Fujita are looking for international expansion in Frankfurt this week. The cover of their catalog is themed on one of their recent additions for the children’s market, Isaac the Bully, by Eri Sonoda.

Almost 30 years in business, Japanese publisher Discover 21 is known for its emphasis on expanding readers’ resources beyond their natural expectations. The company’s eclectic catalogue includes lifestyle and business material, as well as some literary fiction and children’s books.

Like many houses, Discover 21 has heard the call to bring authors closer to their readers.”

“We have an English website where we welcome any submissions,” says Discover 21 President Yumiko Hoshiba, “and we’ve been receiving a lot of submissions this way.”

But there’s another connection that Hoshiba and her company are even more keen to make: We are seeing the world now as one market,” she says. “And so we want to export our products to Asia, Europe, the US, and anywhere else in the world. And we especially want to export our work, rather than manga.” Nietzsche’s Words from Discover 21, adapted by Haruhiko Shiratori, has sold more than 1.1 million copies for the Tokyo-based publisher founded in 1985.

This drive to get more of Japan’s breadth of literature out to world markets beyond the popular artistry of comics, in fact, reveals a surprising imbalance.

“At the moment, taking the Japanese industry as a whole, we import rights more than we export,” Hoshiba says. “In fact, we export only about one-eighth of the amount of material that we import. We would like to change that. “Based this week at a Discover 21 booth located at A16 in Hall 6.1, Hoshiba and her associate, Executive Editorial Director Hiroyoshi Fujita, are holding a busy schedule of meetings to open up potential avenues for the more than 150 books the company produces annually.

Hoshiba says that the import-export gap isn’t due only to a need for translation but also, by tradition, to the fact that the Japanese industry has been thought to have “all the readers it needed.”

Now that globlization has made export more attractive and accessible, she says, larger publishing houses based in Tokyo are working to reach readers beyond their usual audience. Discover 21 is joining that trend, and looking to capitalize on its success at home with a much wider reach abroad.