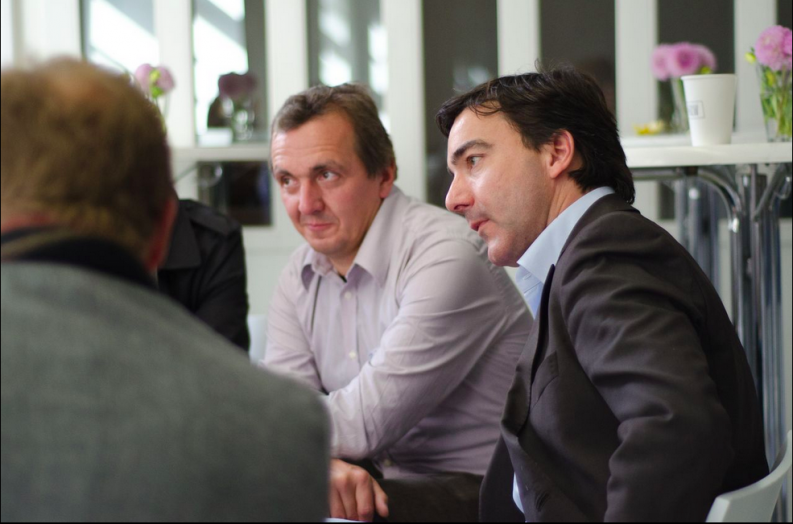 BERLIN: This past Friday people working in all aspects of digital and online publishing came together to talk about the future of publishing at Rewrite the Web in Berlin.  The day-long think tank covered topics from the publishing house of the future (Dr. Siv Bublitz, Ullstein Verlag) to how we read (Henrik Berggren, Readmill), writing so we can be found (Jens Redmer, Google) and Hybrid Authorship (Joanna Penn), along with collaborative writing with readers (Ashleigh Gardner, Wattpad) and redefining journalism (Bobbie Johnson, Matter). The director of Ullstein Verlag, Dr. Siv Bublitz, started off by comparing the current period of transition in (digital) publishing to the beginning of the 20th century, where the rise of radio and cheap, accessible paperbacks also revolutionized media consumption. In order to successfully navigate between digital and analog worlds as a publisher, Bublitz says that publishers must choose formats based on what readers want – and “the ebook will not be the last format for books”. The central role of publishers today is curation and promotion, according to Bublitz, and she pointed out that we need to yet away from print publishing’s “culture of perfection” and be ready to constantly experiment to find out what works in the digital age. Ullstein has been particularly active in online marketing, and uses the German reading platforms Lovely Books and Blogg Dein Buch, as well as Vorablesen.de, a platform developed by Ullstein to make advanced reader’s copies available to readers.

Readmill on Smartphones and Specialization

Henrik Berggren from Readmill, the Berlin-based social reading startup, explained how his team had to redefine how books are consumed on digital devices. While Beggren originally thought that tablets would become the number one digital reading device, Readmill’s data soon showed that more readers were reading on smartphones. In 2012, while 5 times as many people read on tablets than read on ereaders, 40 times more were reading on phones! In hindsight, it’s easy to see why smartphones took off like they did; as Berggren points out, “the most convenient smart phone is the one you always have with you.”

Readmill’s founder criticized retailers like Amazon, Apple and the German reader Tolino, because they provide both software and hardware, thus creating a walled garden which limits users. Instead, Berggren advocates that companies choose one specialization to excel at, such as Readmill with social reading, and partner with retailers. He sees a future in access-based models, which the success of Netflix and the myriad book subscription models like Oyster, 24Symbols and Scribd’s new subscription option all testify to. Access-based models allow readers to read as much as they want for a flat rate, which also gives readers more of an incentive to read more widely and discover books they wouldn’t otherwise take a chance on. Jens Redmer, the co-creator of Google Books, outlined some of the ways authors can use the internet to reach readers. He cited Tim O’Reilly, who argued that the biggest threat to authors is not piracy, but obscurity. In order to overcome obscurity and be discovered, authors can use the principles of search engine optimization when writing text for their websites, and independent authors in particular can participate in Google’s book search program, which indexes books’ entire contents to make the titles easier to find via search engines, as well as making the books searchable. Google is currently working on improving search engines’ semantic understanding of book content to enable the highest quality books to rise to the top search rankings and enable users to find just the book they’re looking for.

Overall, by understanding the mechanisms of search and data analytics, authors can better understand and engage with readers, as well as measure results and adjust their strategies accordingly. The myriad possibilities for interaction on the web mean that authors and readers can connect much more easily than in the past.

Wattpad’s Ashleigh Gardner demonstrated how authors and publishers can use the Wattpad platform to reach readers. The website particularly appeals to teens and young adults, and with over 18 million users, it is the largest platform of its kind. Writers can upload stories, chapters or excerpts to their Wattpad to share their writing with fans. Many Wattpad authors also allow readers to collaborate on stories by giving them the chance to vote on chapters, ask questions about the characters/story or decide how the story will continue. Several books which were initially written on Wattpad are dedicated to individual readers, which is a testament to the relationship which authors can develop with their readers on the platform. Likewise, Joanna Penn, the successful independent author behind the Creative Penn website, also highlighted some of the ways which self-published authors can reach readers directly. She runs a weekly podcast, gives webinars, and is active on “just about every social network” out there. Joanna Penn differentiates between “self-published” and “independent” authors – whereas self-publishing has an amateur, hobby-like character, Penn defines independent authors as writers who treat their writing like a business and do everything it takes to ensure their books are just as high quality as those being published by a publishing house.

The story of how Penn got her agent demonstrates how the position of “independent” authors is shifting; once they were the unpublished authors begging at the gates to be let in, whereas nowadays agents are pitching to independent authors. By first writing a series of successful books and establishing a readership, Penn was able to “jump the slush pile” and submit to various agents upon their request. In the end she received two offers and was able to choose the agent she thought would best represent her.

Penn says “it’s an amazing time to be in publishing,” which she knows from her own experience. She negotiates her own rights in translation, gets royalties from the audiobooks which she commissions via Amazon’s ACX program and enjoys what she sees as the main benefits to publishing independently: a quicker time to market, higher royalties and creative control.

While this may not be news to the US book market, in Germany self publishing is still finding its identity, with many publishing services companies and platforms springing up in recent years. As was apparent from conversations at this event, it’s clear that independent writers in Germany still have a long way to go before attaining the same level of acceptance which indie authors enjoy in the US. However, in Germany there is a variety of opportunities for self-published authors, such as those offered by the author consultation company epubli, which organized Rewrite the Web. One literary agent in attendance also shared that more and more of her clients want to publish independently, and in cooperation with marketing and digital agencies, she is able to advise them on the best path to publication. Bobbie Johnson, from Matter, was the last presentation of the day. Inspired by longform journalism publishers like Byline and Atavist, Matter was created to release quality pieces of investigative journalism which had been looked over by mainstream presses. The Matter founders raised over $140,000 with an initial crowdfunding campaign, and used this as seed money to launch their digital publishing enterprise. Each month they release a piece of longform nonfiction, which is sent to subscribers and available to buy on the Matter website (thanks to Medium, which recently bought Matter, soon they will be switching to publishing pieces weekly).

Johnson illustrated that while a lot of digital ventures count on quantity and multimedia to gain a following, Matter focuses on quality. They use metrics to analyze how readers interact with the texts, they survey subscribers to find out what is most relevant to them, and even allow select donors to be “co-pilots” of writing projects, which allows them to give input and participate in a given assignment as it is being researched and written. For instance, by surveying readers they were able to find out that there was a big demand for audio books, so now Matter releases an audio book version of every piece it publishes, which is included in the $1 price of subscription.

According to Johnson, words are at the center of Matter’s mission. And with all of the communication devices on which people currently read on, Johnson says “we are living in a boom time for literacy.” Thus Matter is a great example of how small-scale publishers can provide a niche audience with the best possible content in the formats they want.

At Rewrite the Web many voices from digital publishing were in agreement on this point: in the digital era, it’s not the format, but the words that count. At the same time, formats should not be neglected. Creators and publishers alike are working hard to deliver content in a variety of forms to reach a wider audience. Also, by partnering with other writers, internet startups and companies, smaller initiatives can reach a scale which would have been unthinkable in the past. The internet offers myriad ways to reach readers directly – and not just to broadcast or sell to them, but to share writing, collaborate with and listen to them.

It truly is an exciting time to be in this field, and enthusiasm was palpable at this interdisciplinary meeting of minds. Although the future of publishing will continue to be written and rewritten, the participants at Rewrite the Web demonstrated that the inexhaustible creativity of entrepreneurs will make sure this future is a bright one.