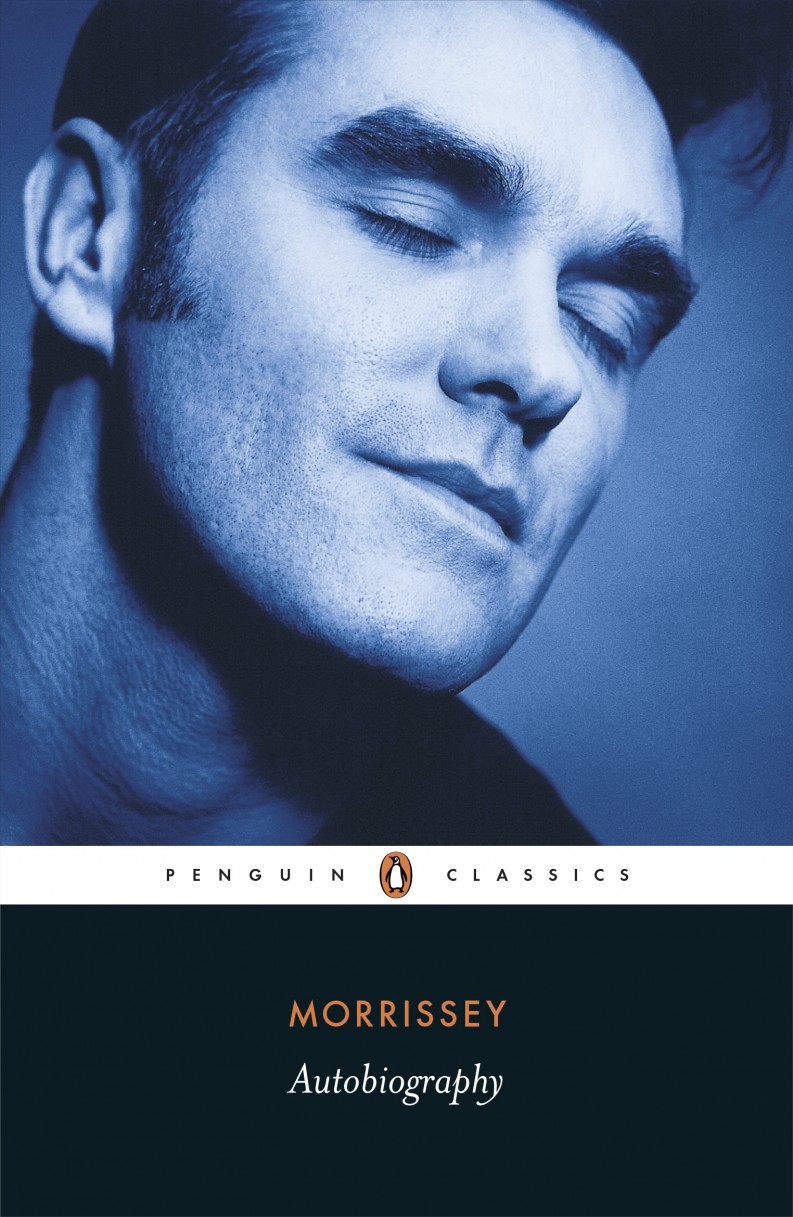 What a merry row following publication of British singer Morrissey’s Autobiography as a Penguin Classic in the UK and US. The cover looks like one of these clever mash-ups that go around online: Pride and Prejudice done up to look like a lurid Signet paperback of the Fifties; Oliver Twist as a hard-boiled crime novel, that kind of thing. Those are entertaining adaptations, but don’t exist as real books.

Penguin Classics’ Morrissey title is similarly perfect looking. It’s an exact copy of all those classics we’ve known over the years, from Plato’s Republic to Hardy’s Tess of the D’Urbervilles. The only problem is, of course, that in this instance it’s a real book, one that could conceivably be shelved in bookstores next to the above. The critics aren’t happy at all.

“Penguin Books…has, after 78 years blessed years of blending literary authority with popular appeal, ceased to care for anything beyond its bottom line,” wrote The Independent’s Literary Editor Boyd Tonkin. “However strong the book, Penguin’s meek capitulation means that it has sold its most cherished brand down the river.”

Now that may be to overstate the case. The vast and revered Penguin Classics list is big enough and famous enough to withstand this dubious aberration. But if it were to be anything other than a one-off, it would certainly devalue the brand. There are very few publisher brands that mean anything. Penguin is certainly one, and within Penguin it’s fair to argue that Penguin Classics and Penguin Modern Classics have particular status. We all have a hard to define sense of these imprints, and it is risky to mess with them.

Yet equally, it is easy to sound like an intellectual snob here. Why shouldn’t Morrissey be in Penguin Classics? He’s an iconic figure of sorts. He’s articulate… But then, stop. A Penguin Classic, with all that implies? Is Morrissey someone who has endured through the ages? Does he have something to say about the human condition? Are his songs even that widely known, as compared to say, Elton John?

Don’t laugh. If Morrissey can be a Penguin Classic, then why not Elton John? After all, it was Elton John who sang at Princess Diana’s funeral, thus securing him a place in the history books of a century hence. And let’s not stop at Elton John. Let’s have Neil Young in Penguin Classics too. And Neil Diamond. And Barry Manilow — my goodness, he’s endured hasn’t he?

Penguin itself is not commenting. One suspects that the elephant in the room — the penguin in the room, perhaps – is the fact that privately they know what they’re doing is daft. But commercial imperatives are commercial imperatives. It’s just that a tiny, naïve part of us hopes that Penguin Classics would be above this – that it would have told Morrissey to go with Michael Joseph, or go elsewhere altogether.

What do booksellers make of it? “Personally, I get why it has annoyed some people but it doesn’t annoy me,” said Waterstones’ PR and Brand Communications Manager, Jon Howells. “It’s controversial, but it’s a one off. It’s tongue in cheek. It’s fun. You can choose to be angry about it or you can choose to laugh or you cannot care either way — ultimately very few people will go for the first choice. Morrissey has been winding people up one way or another for 30 years. It’s part of why people care so much and want to read this book. His is the great untold story from the Eighties generation of British music heroes.

“I know it annoys people, but it just looks so good. And surely one should celebrate that sort of playful arrogance? Anyway, as long as Simon Le Bon’s Lyrics come out as Faber Poetry, I’m happy. I’d take Morrissey over Elton John any day. Elton would demand to be published by Mills and Boon…”

Needless to say, the publicity has done nothing to harm sales. “At the time of writing the book is flying out — outselling Bridget Jones III on its first morning a week or so ago,” added Howells. But surely Morrissey’s fans would have bought it whoever it was published by?

In the great scheme of things, it matters not a jot. But if this is an ‘ironic’ piece of publishing, done for the amusement of Morrissey’s fans, it seems wrong for it to taint a revered brand. By all means have the Penguin Classics cover inside the book somewhere — it looks good — but to publish the whole book like this simply seems pretentious. Just because you can do something, does not necessarily mean you should.