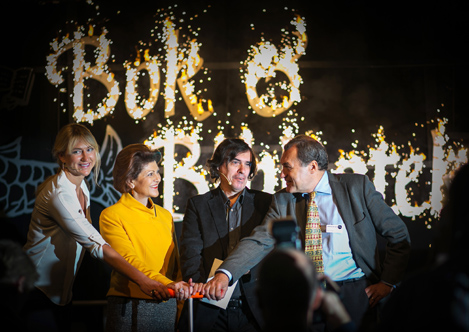 The opening of Göteborg Book Fair 2013: among the speakers at the opening ceremony were the Romanian writer Mircea Cărtărescu and European Commissioner for Culture Androulla Vassiliou.

When an event happens in Gothenburg, the whole city celebrates. At the annual autumn Kulturnatta (culture week), Gothenburgers devour a full spectrum of cultural events with an inexpensive all-access pass. The Gothia Cup football tournament galvanizes the city’s youth through sport and parties in the summer. And then there’s the Bok & Bibliotek Göteborg Book Fair, which was held this year from 26 to 29 September. On Saturday 28 September, when the fair opened to the public, a dense queue of visitors waiting to buy tickets stretched around Svenska Mässan, the convention center where the fair is held. By Sunday, well over 67,000 people had attended the fair and at least 20,000 more are expected on Sunday.

Gothenburg warms up for the fair with a sale at local bookshops a few weeks before, making space for book-fair-related displays and stacks of the free book fair guide. Banners announcing the 4-day-long event hang on lampposts across the city centre. Local clothing and homeware shops affix the fair poster to their windows and offer ‘book fair only’ discounts. Literary events are held everywhere you turn—Romanian poets at Nefertiti nightclub, Glänta magazine and the Swedish Film Institute’s dance party at Trägårn in the Botanical Gardens, Galago comic book publishers at the Pustervik bar, OEI journal at the city art museum. Because the fair is as much for the trade as for the public—with participation not just from publishers, agents, authors and arts councils, but also Swedish libraries—the fair is about building a community of book lovers at every level.

Author Daniela Crasnaru, visiting as part of the Romanian market focus, remarked, “When I was a publisher, I went to Frankfurt. This is more familiar. [The Göteborg Book Fair] is like visiting a library that is yours. It’s very warm.”

This sentiment and the sense of community is reflected by publishers I spoke with from the UK, Finland and the Faroe Islands. Göteborg, unlike Frankfurt, is a place where people go to catch up with the Scandinavian markets in a calmer, smaller setting before heading to Germany. One publisher said, “I won’t be disappointed if I don’t make a deal here. I come to keep up with the market and my Scandinavian contacts.”

Authors came from across the globe to attend the fair. Richard Ford and Caitlin Moran drew crowds. Seventeen Romanian writers and the Romanian Cultural Institute were central to the seminars and exhibition stands. Nelson Mandela, Mo Yan, Santiago Gamboa, Hector Abad Faciolince, five visiting authors from Bangladesh were discussed or featured in the program.

From Sweden entertainment and literary stars included rapper Petter, rocker Dregen, author Jan Guillou, director-turned-novelist Björn Runge and celebrated author Jonas Gardell, whose trilogy on AIDS in the 1980s and 1990s has been met with accolades in Sweden, was turned into a Swedish TV-series and is now getting attention in Hollywood. Writers with new books out that were building buzz were Lena Andersson, Sofi Oksanen, Sami Said, Johanna Holmström and Philip Teir.

The seminar program was wide-reaching and followed several threads. This year marked the debut of a digital strand in the program, with a Digital Square that provided space to showcase new technology, learning programs for schools and quiet space to read or record podcasts. In response to a decrease in reading ability and comprehension, Läsrörelsen (the reading movement) and the book fair curated a thread of event with teachers, experts and researchers specializing in play, reading and learning. The school-and-learning-themed events explored key issues in education and literacy during the two trade-focused days of the fair. Comic books, food, gardening and free speech also were major themes.

This is not to mention that independently organized events held at stands across the fair. The Swedish Church presented a series of talks and debates about religion and society. Author meet-and-greets, discussions and readings were held at publishers’ stands.

The library, literature, and storytelling events were some of the most prominent at the fair. Sweden, like the UK, is fighting to keep its libraries open. The threading of librarians through the program gave a better sense of the publishing ecosystem.

In a panel about how Swedish literature makes its way into the world, Johannes Rudberg from the National Library of Sweden (Kungliga Bibliotheket) joined Jan Arnald (a.k.a Arne Dahl), Norstedt’s Linda Altrov Berg and academic Johan Svedjedal for the discussion. Rudberg highlighted the Suecana program, which collects literature published in other languages that have a Swedish connections and foreign-language translations of Swedish fiction and non-fiction.

The discussion traced trends in Swedish literature over the years, noting that though Swedish crime is still one of the most popular literary exports, agent Altrov Berg noted that there has been a greater interest in other Swedish narratives now that the character and place names are more familiar to foreign readers. Germany, Holland and other Scandinavian countries have traditionally been markets where Swedish literature has been able to easily make the leap into translation, and the US and UK are still some of the most difficult to sell translations into. However, Altrov Berg noted that even selling authors into Germany, Holland and Scandinavia has become more of a challenge, stressing that an author’s platform — including reviews, prizes and the author’s story—are increasingly important factors in selling books into non-Swedish markets. Svedjedal, in his research, painted a more favorable picture with a longer view. For the size of the language, Swedish literature is one of the ten biggest language groups that are translations from and that this year there have been around 150 translations from Swedish literature. Rudberg added that it is increasingly common that international libraries have sections dedicated to Swedish literature.

The panel gave a nod to translators and champions of Swedish literature who are often also critics, translators and or academics and their pivotal role in getting Swedish literature into new markets. As a note, the Swedish Arts Council supported the travels of a number of translators to visit the fair as part of a regular grant program. As part of the grant program, the translators were given networking opportunities and time to meet with agents to help plant the seeds for new collaborations with emerging an established translators. The translators Publishing Perspectives spoke with were very happy with their experience, citing the importance of meeting agents in person to build these relationships.

In addition to a perceived increase in interest in Swedish literature beyond the crime fiction, there appears to be a growing literary magazine culture and interest in books that sit between fiction and non-fiction. The launch of the Swedish edition of Granta in early summer, the head of culture at Svenska Dagbladet Daniel Sandström said, raised the profile of Swedish literature on the world stage. Sandström has observed a shift in power in international publishing, whereby the US and UK are less and less the places where people are looking for exciting new talent and stories. It was noted that it is still a challenge to find the writers who haven’t trotted a familiar global path: ending up at the Iowa Writers’ Program or similar, world-class institutions. Johanna Hagerström, Granta Sweden’s editor, did hint that a Best of Young Scandinavian Novelists issue may be on the cards, which would inevitably give literary fiction’s international profile a boost.

This is where recent cultural publications in Sweden as tools of discovery come into play. The following publications are doing compelling work. Const Literary (P)review was founded in 2012 to provide an alternative to commercial fiction with writing from emerging and established authors. Filter magazine publishes classical reportage and, like a journal and publisher Glänta, is also a publisher. Their most recent success is 438 dagar by Johan Persson and Martin Schibbye. Launched two weeks ago, it sold out of its first print run of 30,000. Another 15,000 are now being printed as bidding begins for film rights among five Swedish films production companies. The nonfiction book is reportage about the struggle and journey of two Swedish journalists who snuck into Ethiopia’s Ogaden region in order to find out the truth behind reports of human rights abuses related to oil companies; they were then held for fourteen months. They book sprung from a story the journalists were meant to publish in Filter. Novellix, founded in 2011, publishes four short stories, four times a year as ebooks or as individually bound pocket-sized books. (Three of their stories will be published in English by Readux Books in 2013 and 2014.)

Though there is a sense that with the debut of Granta and other magazines in recent years that this market is expanding. Editor Jonas Magnusson of OEI, a state-supported cultural journal, feels that the market is shrinking in Sweden and in his experience the magazine’s international following is growing. Still, these publications are providing an alternative space for writing in Sweden. For example. Johannes Anyuru, whose prize-winning books have been published by Norstedts, turned a blog he wrote from Athens into a slim book published by Glänta’s alternative press. It is called A Civilization Without Boats.

When asked about what’s coming in Swedish literature, Anyuru predicted increasingly politicized narratives from the generation that is now in their teens. Continuing a trend of fiction that is deeply based in reality, he feels a greater space will open up around urban stories from the working class; “But they probably will be called something else.” One could say Anyuru along with Sami Said, Marjaneh Bakhtiari and Jonas Hassen Khemiri are part of a surge of young Swedish writers exploring multicultural and globalism. Philip Teir’s The Winter War (out in 2015 with Serpent’s Tail) touches on this as well.

At a panel discussion with authors Kjell Westö, Philip Teir, Jens Liljestrand and Anna Fredricksson discussed the prevalence of fiction that is a thinly veiled biography. Looking at the August and the Finlandia prize lists, it would seem that this type of fiction is very much of the zeitgeist or perhaps the success of these novels perpetuates their creation. Liljestrand suggested that this may also be in response to the popularity of chick lit and crime: “Perhaps it is a countertrend. Is writing not-serious when we make characters up?” In a separate conversation with Publishing Perspectives, Daniela Crasnaru suggested that this trend is so strong because people nowadays can do everything but die on the internet, so perhaps they want to read stories that depict reality in a way that they aren’t experiencing in their digital lives. The question is: Will these stories translate well into foreign language markets? And what will they add to the conversation?

Next year’s focus will be on Brazil and Brazilian literature.