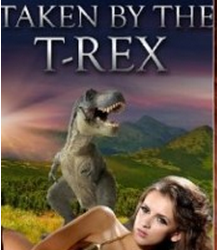 Tired of vampires? Werewolves leave you cold? Zombies too…undead for you? Perhaps you’re ready for the next big thing…dinosaur erotica.

All Amazon pages for these stories come with the following warning:

“Warning: This is a tale of beast sex. This story was written to unlock your darkest fantasies and innermost desires. It is not for the faint of heart and is not your mother’s erotica. All of the sexual descriptions found in this book are very explicit in nature. It’s not suitable for someone under 18 years of age. Read at your own risk.”

At Jezebel, Laura Beck offered a sample from the story “In the Velociraptor’s Nest”:

“She wasn’t sure if her sudden arousal was because of her earlier thwarted climax in the cool stream, or if she was just desperate for one last pleasant sensation before being torn limb from limb by the great, scaly beast. Either way, Azog relished the rasp of its tongue, hot and rough, on her sensitive skin.”

These stories, available on Kindle, which also include such titles as Taken by the Pterodayctl, Taken by the T-Rex, and Taken at the Dinosaur Museum, are written by Alara Branwen and Christie Sims who met while studying at Texas A&M. Branwen worked at a supermarket and Sims worked as a tutor — until the two learned just how much money could be made by writing about women having sex with dinosaurs.

Maureen O’Connor at New York Magazine interviewed the pair, asking the question that had to be asked: Why dinosaurs?

“To truly answer this question, I’ll have to go all the way back to when I first started writing erotica, a little more than a year ago. I was complaining to a co-worker one day about how I was having trouble making ends meet with my crappy job and my bills from college. (I had a day job at a supermarket alongside going to school. Christie worked as a tutor and went to school.) My friend told me about an article that detailed the self-publishing boom that was going on and about how E.L. James had made a fortune self-publishing her erotica. Thinking that I could write my own erotica, I went home that night and learned about all the self-publishing platforms that were available at that time.

“Once I started making more money writing erotica than I did at my job (that only took one month), I quit to start writing full-time and going to school part-time.

“I did some research and found that a subgenre called ‘monster erotica’ was starting to get popular. So I decided to write stories that contained monsters that were staples, or at least what I thought were stapes, of the genre: shifters (werewolf), tentacle monsters (it was only later I found out shifters weren’t considered ‘monsters’). I wrote a lot of dragon-erotica stories, BBW (Big Beautiful Women) romance, a few other things. But after a few months of writing about dragons having their way with busty maidens, I started getting burned out. I toyed with the idea of quitting and going back to work. But one day, I was walking and I thought about the movie Jurassic Park. My perverse mind immediately went to my work, and I pictured dinosaurs having their way with women. I died laughing. I was about to dismiss these thoughts as the workings of my freaky mind, but then I had an epiphany. Dinosaur erotica was something new I’d never tried before.

“How dynamic? According to Branwen, “Combined, Christie and I make more money than our friend who has been working as an engineer at Boeing for a few years and Christie’s friend who is a five-year accountant in Dallas, Texas.”

You can, errrr, explore the works of Sims and Branwen here.