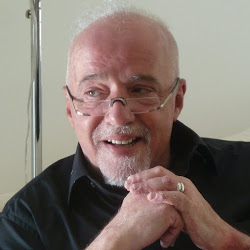 In an interview with the German newspaper Die Welt, which was excerpted by O Globo in Brazil, Coelho states that: “I have spoken publicly and talked with many fellow writers who were not invited to Frankfurt, such as Eduardo Spohr, Carolina Munhóz, Thalita Rebouças, André Vianco, Felipe Neto and Raphael Draccon, just to mention a few names. As much as I tried to take them to the fair, I met without success. So, in protest, I decided not to go to Frankfurt, which was a difficult decision for many reasons.”

Coelho — who offered the Keynote Speech at the 2008 Fair, where he celebrated selling 100 million copies of his books — notes his “close relationship” with the Fair director Juergen Boos and his respect for the event and its forward thinking attitude.

All said, Coelho’s gesture of protest is likely less about literature than it is about speaking out against the government.” I’m not going to Frankfurt, even with the high esteem I have for this show, because I simply do not approve of the way the government is presenting Brazilian literature,” he says.” I do not want to pose as a Brazilian Robin Hood. Nor as Zorro or the Lone Ranger. But it does not seem right to be part of the official Brazilian delegation, which does not represent so many writers and excludes so many others.”

Perhaps unbeknownst to Coelho, at least one of the authors he noted as not being an official delegate — Eduardo Spohr — is indeed appearing at Frankfurt and participating in several events, including the Self-publishing Ignite session next Saturday on the Publishing Perspectives stage.