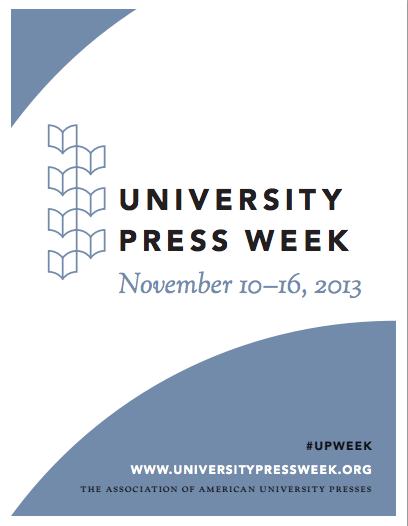 What do you think about when you hear the term “university presses”? Stodgy men in corduroy churning out  monographs like Anatomy of the Nervous System of Octopus Vulgaris? Or perhaps it a bespectacled scholar guffawing over The Humor of Kierkegaard: An Anthology? Maybe it’s a jolly gal in suitpants happily catering to the mainstream, with something like The Pecan: A History of America’s Native Nut.

Naturally, all of these images are a bit cliché and largely wrong. University presses are just as much at the forefront of publishing innovation as anyone. Sometimes they can be even further along.

I’ll admit that I don’t pay as much attention to university press titles as I should. And when I do, they tend to be of the literary variety, such as Princeton University Press’s Italo Calvino: Letters, which served as a prompt for my own thoughts on the relationship between letter writing and the permanence of thought. But the fact remains that university presses remain essential to the advancement of our culture and our understanding of the world. They continue to publish and engage in some of the most essential research across the humanities, sciences and arts, both here and abroad.

What’s more, they are often essential to those trying navigating the vagaries and subtleties of our globalized world. As former Secretary of Defense and former president of Texas A&M University, Dr. Robert Gates recently said:

University presses provide American citizens and their leaders a wealth of authoritative knowledge and fresh insights on the nations, economies, cultures, and beliefs of virtually every corner of the world. They also advance in-depth understanding of our own country—the political, social, and cultural heritage of virtually every region, population group, and issue in America, past and present. University presses cover it all, and all of us benefit from their work.

This week The Economist magazine celebrated the unique achievements of what Peter Phillips of Cambridge University Press, which has been running since 1584, calls “the world’s oldest media business.”

University presses are thriving in some places, such as China, which has around 110 of them. But elsewhere they are at a moment of transition. They face the same difficulties as commercial publishers, such as digitisation and the decline of bookstores, as well as some of their own. There has been a decades-long shrinkage in demand for their titles, as the rising price of scientific journals has left libraries less money to spare for buying new books. Academic monographs are considered a splash today if they sell just 800 copies in their first year. Public and private universities, under financial pressure, are scrutinising the subsidies they give their presses. Some have talked of shutting them.

To help underscore the innovative nature of university presses, the Association of American University Presses launched University Press Week last year during its 75th anniversary celebrations to highlight some of the most interesting work coming out of the university press community. This year, AAUP is hoping to establish a tradition and is once again celebrating the community from November 10-16. The AAUPs 130-strong membership is again highlighting the vast array and wide-range of innovative books they’ve produced in a digital gallery on the AAUP’s website, under the headline “Ideas Unbound.”

University Press Week will feature events on campuses nationwide, as well as a live-streamed event on Shindig on November 15, from 2:30-3:30 EST, for scholars to pose questions. The event will beModerated by Carlin Romano, and panelists will include William Germano, Dean and professor at Cooper Union, Kathleen Fitzpatrick, Director of Scholarly Communication at the Modern Language Association, and Gita Manaktala, Editorial Director, The MIT Press. (You can sign up for it here.)

In addition, the AAUP has recently added a new Higher Education bibliography to its Book for Understanding platform, a website that offers lists of titles and university press resources the address current events. Other topics that have been recently updated include The Catholic Pope, Reproductive Rights, Same-Sex Marriage, Supreme Court of the U.S. and Voting & Elections.

If you’re anything like me, you’ll find plenty of reasons to pay attention and reconsider what you think a university press might be.