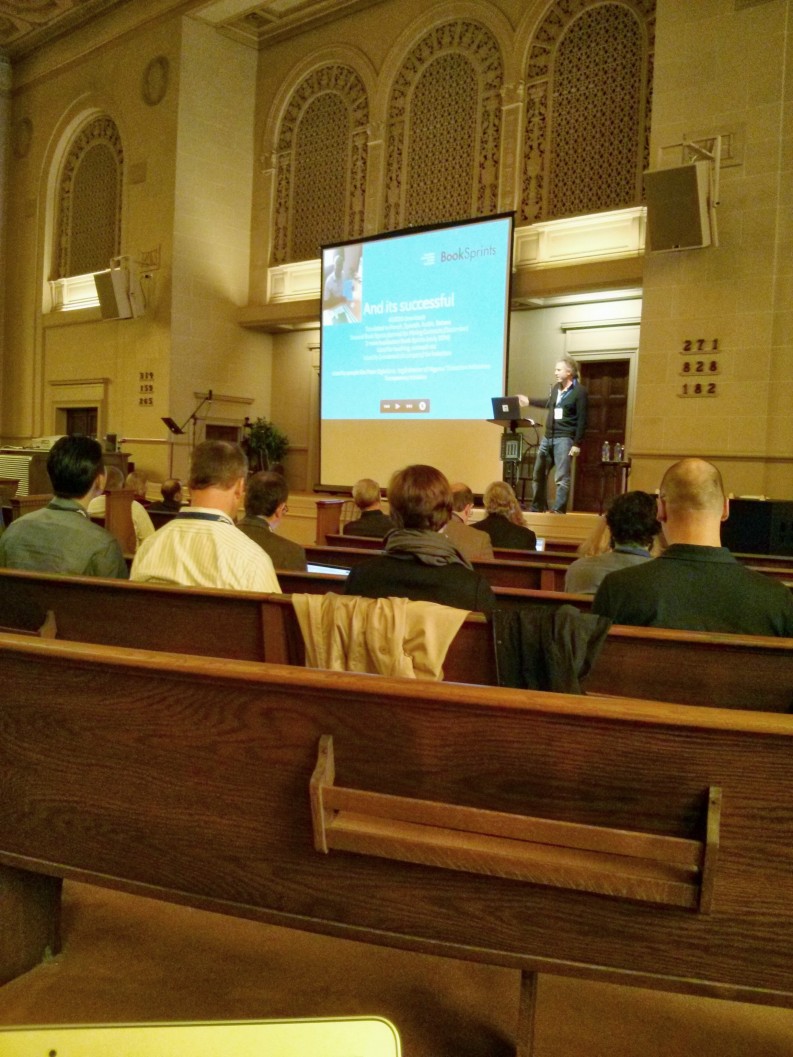 Adam Hyde of BookSprints presents at Books in Browsers 2013

As the fourth edition of Books in Browsers kicked off, an event described by the organizers as “a small summit of the next generation of publishing companies,” the first group of speakers focused overwhelmingly on readers as the transformative force in publishing.

Watch the live stream from the conference here.

Peter Armstrong of LeanPub told the audience, “publishers are optional.” He cited Charles Dickens and E.L. James as examples of authors who published their writing outside the established channels (as serial fiction and fan fiction, respectively), took risks that a publisher might not have, and were wildly successful.

Publishing serialized fiction, Armstrong said, allows authors to build an audience one chapter at a time, to pivot and adjust the course of the work according to feedback from their readers, and to produce works that fulfill readers’ expectations. This leads to “product/market fit,” which Armstrong says is essential for success.

Can publishing companies take advantage of this collaborative type of writing and reading in the same way authors are already doing so? That is part of the idea behind LeanPub, which offers a fast and easy publishing process. If success in publishing today means publishing more works, more often, in order to satisfy reader demand, Armstrong believes that LeanPub could be the solution.

Anna von Veh, a publishing consultant at Say Books, echoed the need for publishers to pay attention to fan fiction. “The readers are the writers,” she said. “We have to engage with them in some way.” Though exactly how publishers might engage or monetize fan fiction is not clear. “It’s at the boundaries of what we like to accept in publishing,” von Veh said, referring to copyright concerns from publishers.

For example, Kindle Worlds, Amazon’s portal that offers a sales platform for fan fiction, misses the mark, according to von Veh. “They haven’t really understood that fan fiction is online, that the connection is what is important.”

What is clear is that fan fiction communities will continue to write and engage, regardless of whether the established publishing industry decides to take part.

Reader-driven content creation and production is not just happening in fiction. Adam Hyde of BookSprints introduced the idea of a reader as “a person with knowledge needs” and a person who, in the past, had to wait for a publisher to produce the knowledge he or she needed. Today, Hyde says, it’s possible for readers to create books themselves that meed their knowledge needs.

To illustrate his point, Hyde presented one of BookSprints’ recent projects, in which the company brought together oil industry experts together to conceive of, create, edit and produce a book about oil industry contracts. This book contained material that all of the collaborators needed in order to educate students and their constituents about the work they are doing. No publisher had created such a book, but a group of experts working together, with facilitation from BookSprints, were able to create exactly the material they needed. At 49,8000 downloads, the book has reached a very targeted audience.

This process, Hyde says, is more about “drawing the book out of the people.”