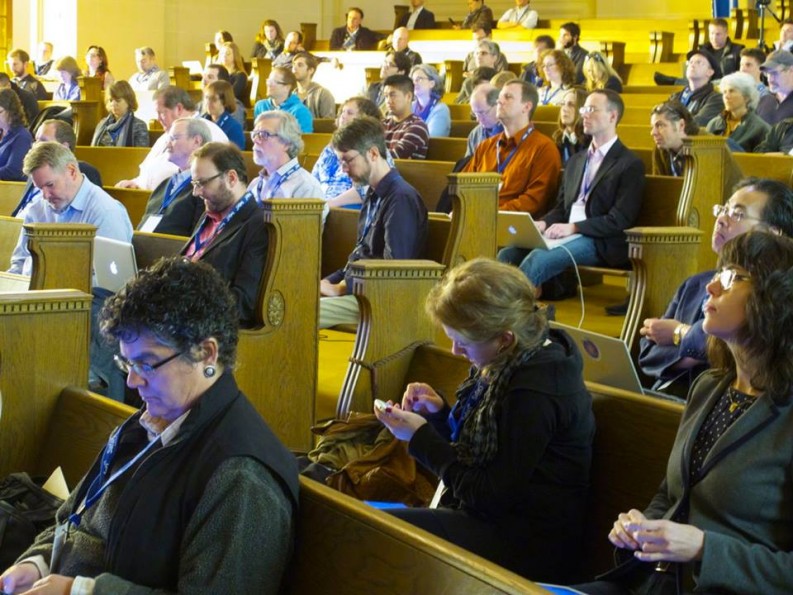 Content is king, as the saying goes. But at Books in Browsers IV in Friday, several speakers presented the idea that context is critical if you want users to discover, share and consume your content. Audience at Books in Browsers IV

So what does this really mean? It means creating a digital context around your core content, according to Corey Pressman of Exprima Media. If your core content is a book, for example, context might include include the book cover, author interviews, reviews, tweets, reader feedback, and even the design of the pages themselves.

“It’s really important to get this right,” says Pressman, and to include a plan for creating this contextual material along with your core content.

Pressman cited examples throughout history of ways in which context informed our reception of content, from ancient annotations on text like The Iliad and the Talmud — like social media layered on top of a codex — to the evolution of print book design.

To better define all of the contextual material surrounding a piece of content, Pressman borrowed a term from French literary theorist Gérard Genette: paratext. Paratext is “a zone between the text and the off-text” and includes factors that influence the reception and consumption of a piece of content.

“Let’s become paratext designers,” posed Pressman, “to inject the language of paratext into our conversations about content creation.”

#bib13 Corey Pressman @Exprima Paratext as "a fringe" (Genette) of the reading text…"things that serve the reception of a [paper] book."

Following Pressman’s presentation, Dan Whaley and Jake Hartnell of Hypothes.is presented their vision for the annotated web, or a “layer of discourse over the top of the web.” By using an API inside a web browser, the Hypothes.is tool is an open platform that allows “sentence-level” annotation and gives web users access to “commentary, references, and insight on top of news, blogs, scientific articles, books, terms of service, ballot initiatives, legislation and regulations, software code and more.”

By using a browser-based API, Hypothes.is is designing their tool for long-term survival. “The broser is the greatest publishing and reading application of all time,” Hartnell said. The tool is still is alpha, but for you early adopters out there, grab the Chrome extension and give it a try.

the chrome alpha extension for @hypothes_is annotation is at http://t.co/JKI2zrTmR3. #bib13 claim a username and annotate the web!

On a more academic and playful level, Anthon Astrom presented two of his company’s research projects. The first called Lines is a format that brings more context and richness to online content and small screens. Users can create and jump in and out of dialogues, add comments and annotations, and zoom in and out of the conversation. Play with Lines here.

The second project, Maps, offers content creators the opportunity to create their own context for information, and to organize not in files and folders, but according to subjective tags. In a real-world application, such tags applied to large archives can provide a visual indication of what topics and subjects are represented in the collection