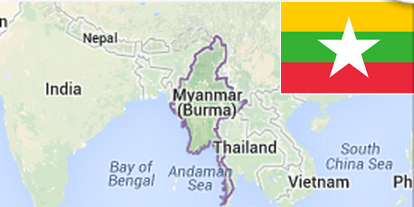 The Myanmar Times reports that a PEN International Center with 23 active members has opened in Myanmar, and will serve as an NGO for writers “and for advocacy and education about literature, helping aspiring writers from all backgrounds in Myanmar.”

It was a fifteen-year effort to make it happen, and came about largely through the work of Myanmar writer and doctor Ma Thida (Sanchaung), who, after her release from prison in 1999 (she had been sentenced to 20 years in Insein Prison for “endangering public peace, having contact with illegal organizations, and distributing unlawful literature.”) worked steadily (including visits to PEN offices around the world) to make her dream “of a day when Myanmar writers would be able to join colleagues and establish an internationally recognized forum in which to develop creative literature and critical thinking,” a reality.

But it wasn’t until the 79th Pen International Congress in Iceland, on September 9-13, 2013, that PEN Myanmar received official permission to open a center.

“We didn’t have the chance [under the former government] to form that kind of organization or to connect with international organizations,” writer Nay Phone Latt told the PEN Congress. “But now, we have a chance and we need to grab it firmly. So this is the time to start.”

Of course, PEN’s influence extended into Myanmar even during the worst of times, providing a beacon of hope for the nation’s literary community. Ma Thida won the PEN/Barbara Goldsmith (Freedom to Write Award) in 1996 while still imprisoned, and Nay Phone Latt won the same award in 2011, also while in prison.

And it was winning that award that helped to inspire Nay Phone Latt to push for the opening of a PEN chapter in Myanmar.

“When I heard the news that I was awarded the PEN Barbara Goldsmith award by PEN America, we [he and fellow prisoner and writer Zaganar] were [being] told that in the near future we will have to form that kind of organization in our country and we also have to support other countries worse off than ours,” he said. “PEN Myanmar is our dream. In the bitter past, we had to be the object – just accepting the others’ support. [In the future] we want to be the [group] that can support and help the victims around the world.”

The mission of the Myanmar PEN Center is threefold: “to conduct a media watch on issues related to freedom of expression; to organize discussions about literature with the public and develop a culture of literature in Myanmar; and to make literature a part of the educational curriculum in the country, promoting creative writing.”

It’s going to be a mammoth undertaking, given the toll taken on the country’s writing community during years of living under censorship.

Writer U Pe Myint told the paper that, “Myanmar was blocked from developing for ages by the junta. We didn’t know the situation of the world’s literature and the activities of international writers. [The] Myanmar people need to know about the world more, so we need to join this kind of international organization.”

PEN Myanmar is currently accepting member applications, and will hold its first official PEN Myanmar Congress in November to choose a director and board.