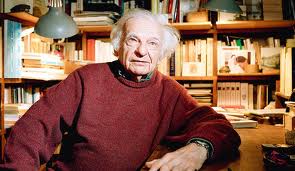 Bonnefoy (born in Tours, France in 1923) is the first French writer to win the award. Primarily a poet, he has published some 20 collections of verse, as well as essays on art and art history, and translations of Shakespeare and W.B. Yeats.

The jury described Bonnefoy as “a witness to the human experience of the 20th century, which he has faced with the generosity and sharpness of his critical and poetic work, and in which he has been able to merge tradition with the present.”

“Bonnefoy’s poetic sophistication contrasts with his simplicity of diction, and contains the avant-garde elements of the great pillars of modernist poetry, such as that of Baudelair, Celan or Rimbaud,” the jury stated.

“Bonnefoy is a metaphysical poet who understands poetry as the exploration of other dimensions. The improbable and the stuff of dreams have a physical, undeniable and tangible existence. He is a poet of paradoxes who plays with those contradictions,” said jury member Esperanza López Parada.

Considered one of the most important French poets of the second half of the 20th century, Bonnefoy met André Breton in 1946 and attended the surrealist’s salons in Paris. The son of a railroad worker and a nurse, he has also published short stories and a dictionary of mythology and religion, as well as books on artists such as Juan Miró and Alberto Giacometti.

Bonnefoy has taught at a number of universities in Europe and the US, and succeeded Roland Barthes as chair of comparative study of poetry at the Collège de France in 1981. He has been the recipient of numerous awards, including the Prix de Critiques in 1971, the Balzan Prize for Art History and Art Criticism, and the Franz Kafka Prize in 2007.

The $150,000 prize will be awarded at the Guadalajara International Book Festival, which runs from November 30 until December 8 in the city in western Mexico.

Last year’s prize, awarded to Peruvian writer Alfredo Bryche Echenique, caused controversy amid accusations of plagiarism against the author, who received the prize at home in Lima after deciding against traveling to the book fair to receive it in person.