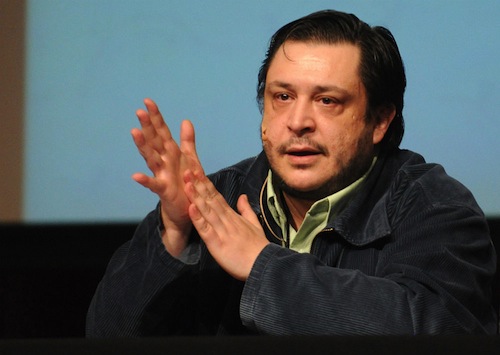 Hernán Casciari says “the digital era has made us lazy and apathetic, and our stories, our literature, are losing their shine.”

MEXICO CITY: “I don’t give a damn about the future of the book,” was Argentine writer Hernán Casciari’s dramatic statement to a surprised audience at the 3rd International E-book Symposium in Mexico City last week.

A forum of lively debate on the state of electronic publishing across the Spanish-speaking world, an emerging market of huge potential, brought together academics, entrepreneurs, publishers, writers and editors from across the region and beyond.

The event was organized by Conaculta, Mexico’s arts and culture council; you can read our report on the event here.

Casciari hails from Buenos Aires, but lives in Barcelona. He is the founder and director of Orsai magazine, www.editorialorsai.com, which morphed out of his blog containing articles, essays and short fiction. His novel Subir de espaldas la vida won the novel prize at the 1991 Buenos Aires Biennale, and his short story Ropa sucia won the Juan Rulfo Prize in 1998.

And while many of the roundtable discussions focused on the rising popularity of ebooks in Spain and Latin America, and the importance of embracing electronic publishing for writers, booksellers and libraries, the novelist and blogger’s message was simple: the advent of the Internet and our increased connectivity have ruined our attention span as readers and present new challenges to creative writing.

Increasingly sophisticated gadgets and ubiquitous Internet access mean that we are ever closer to information and knowledge, and yet our ability to glean that knowledge, by reading uninterruptedly, has been irrevocably stymied, he said.

“I don’t care if people read ebooks or traditional books, or about the relationship between both, or about the death of either. What’s important right now is our lack of concentration, our inability to be able to read, listen or write for more than 20 minutes,” he said, while readily admitting his own guilt at such a shortcoming.

“Back in the 20th century I used to read voraciously, and could sit and write for hours. Something happened at the beginning of the 20th century, a gradual change I liken to a frog in a pan of water coming to the boil. By the time the frog realizes that the water is going to boil and it’s time to get out, its muscles have atrophied and it’s too late.”

“The digital era has made us lazy and apathetic, and our stories, our literature, are losing their shine,” he said.

In addition to our inability as readers to remain focused on a text, the intervention of technology in our daily lives has also changed our perception of storytelling, rendering stories set in the analog age unbelievable to young readers and making us incredulous to plots that hinge on a lack or failure of communication.

He cited the example of reading ‘Little Red Riding Hood’ to his young daughter, “who has a complete lack of awareness of or nostalgia for the analog world,” and who pointed out that the main character could have simply sent a text message to her grandmother.

“Children’s stories will need to be rewritten for the digital generation. The whole literary structure has shifted as our having become accustomed to living with technology makes it more difficult for us to invent stories,” he said.

“Why live on the edge of adventure if everything can be sorted out with a phone call?” he asked.

“Think of a well-known story and then put a mobile phone in the pocket of one of the protagonists,” he said. “With a mobile, the colonel does have someone who writes to him.”