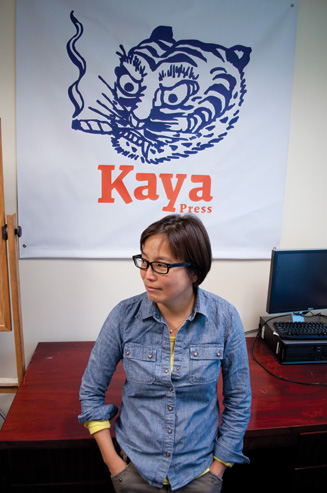 The panel discussion, “The Small Secret to Establishing a Vertical Marketplace,” takes place on Friday, October 11 on the Publishing Perspectives stage at the Frankfurt Book Fair, Hall 8.0 N170 from 10:00 – 10:30 a.m. Jeffrey Lependorf, head of the Council of Literary Magazines and Presses in the United States, once said that “Small publishers thrive by focusing their editorial missions, understanding who their potential readers are, and working to reach those readers as members of a caring community.” But how do independent presses, which are notoriously strapped for money and time, manage to come up with innovative ways to serve their communities? Social media is one popular approach to finding readers, and tools like Goodreads giveaways offer valuable information on what else readers of a given book like. Events and readings also enable presses to hear from readers, and publishers such as Kaya Press and Coffee House Press have been coming up with very creative and appealing events. A direct sales channel — especially with incentives like discounts or DRM-free ebooks for buying direct — is another way to get more in touch with one’s readers

One of the things which smaller presses understand is that you have to belong to a community to serve it. This means approaching readers as a fellow book lovesrs, which many publishers (both large and small) do by blogging or tweeting about books.

On Friday, October 11 on the Publishing Perspectives stage in Hall 8 at the Frankfurt Book Fair, four of America’s leading independent literary publishers — Chris Fischbach of Coffee House Press, Sunyoung Lee of Kaya Press, Nanci McCloskey of Tin House Books, and Kate Gale of Red Hen Press (moderating)—join in conversation about how they know their readers, build audiences, and publish for them. These four publishing houses publish a broad spectrum of literature and their approaches vary accordingly.

For instance, Kaya Press, a publisher of wide-ranging Asian diasporic literature based at the University of Southern California, interacts with readers by giving them a taste of the publishing process. At the LA Times Festival of Books, for instance, Kaya teamed up with other southern Californian presses to create a book-making station where visitors could compile their own anthologies — from choosing the short stories to be included all the way to binding the books. Collaboration with other small presses is equally important to Kaya. They have cooperated with literary magazines, book publishers and the Asia Pacific Arts online magazine at multiple events to create engaging and interactive programming for readers. Publisher Sunyoung Lee says, “non-profit indie publishing has to have that sort of participation to remain sustainable long-term.”

Nanci McCloskey, director of rights and publicity at Tin House Books, has been happily surprised at Tin House’s success with titles which may have been considered “niche” in the past. For instance, Glaciers by Alexis Smith, a novella whose strength is lush and poetic language, turned into an unexpected hit and was even chosen as one of 30 books to be included in World Book Night in the US, alongside Willa Cather’s My Antonia and Margaret Atwood’s The Handmaid’s Tale. “Having publishing successes like Glaciers gives Tin House the confidence to continue to publish what moves us, in spite of marketing challenges, and trust that we’ll find the book’s audience,” says McCloskey. Chris Fischbach, of Coffee House Press, explains that “audience engagement is obviously a hot topic not only in the arts, but in industries of all kinds.” While many organizations are eager for “input” from their audiences, Fischbach wonders if audience feedback is truly taken into account when deciding what to publish. Coffee House sees publishing books as just one of many ways to serve readers. “When we stepped back to ponder what our actual role is, we realized that it’s to connect writers and readers.” Coffee House has pursued this aim by developing collaborations between authors, readers and libraries in their Library Residency program, in which writers and readers explore a library’s collection and share their findings in blog entries and performances.

In addition, they have several other multidisciplinary installations and events in the works, one of which will involve performance artists interpreting essays from an upcoming a collection by Andy Sturdevant, in which their whole reader community will be invited to join in.

“At Coffee House, engaging readers means inviting them to create new work based on the books we’ve published. To collaborate with our writers and our books to make new art.” says Fischbach.

Whether via social media, blogs or in conversation with readers at events and other functions, these independent presses are not just sitting around and waiting for an audience: they are proactively taking their books and writers to where the readers are.