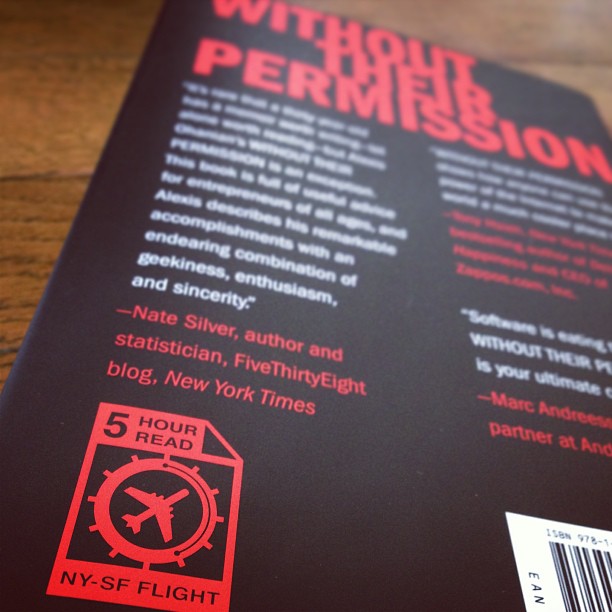 We all have too much to do and not enough time to do it, and I understand that, which is why there’s The Four Hour Workweek and The Four Hour Body, and why people feel the need to know how long every activity is going to take. Recipes tell you how exactly long it will take to prep and cook the food. DVDs come with the running time of the film. Signs on the freeway tell you how long, given current traffic conditions, it will take to get to your exit. Even Disneyland has signs telling you exactly how long you’ll be standing in line before you get to your ride. Should books then come with a label telling you how long it should take to read them?

Reddit co-founder Alexi Ohanian thinks that books should tell you how long they will take to read as well. His forthcoming book, Without Their Permission: How the 21st Century Will Be Made Not Managed (Business Plus), has a small mark on the back cover, indicating that the book is a “5-hour read,” equaling the approximate time it takes to fly from San Francisco to New York City. In a picture of the cover that Ohanian posted on imgur, he added, “Hope this becomes a trend — I believe we’re the first book to do it, yes?”

At Flavorwire, Michelle Dean, who is pretty sure that yes, this is the first time that the estimate of the time it will take to read said book has been stamped on a book, but doesn’t think this is such a great idea:

“…the purpose isn’t so much informational as it is, I think, some sort of hilariously disciplining of both author and reader. A slow reader will feel guilty: a fast reader will feel pride; in both cases the feelings serve no useful purpose. For a writer of any real caliber the thing is actively self-debasing. This is an author saying to you: ‘I have written a book. Isn’t it great? It is, but it is only worth five hours of your time. It might take you longer to read War and Peace, sure, and you might have to do a couple of re-reads. But the whole sum of human knowledge on offer in this book: it’s five hours only. I’m just efficient like that.

“I understand that we live in the kind of culture where we are scheduled down to the minute, where reading is a thing you fit into your spare time, which is typically the one hour you spend on the subway each day. So I understand needing to organize your time. But what I don’t understand is, as Ohanian evidently does, finding this kind of hectic overscheduling fun. And fun enough that you’re hoping to start a ‘trend’ inaugurating greater and greater parceling out of our time on this earth. I’m sure these people would say it’s so that we can all make the most of every minute until we die. Personally, I don’t want to spend any of those minutes wondering if I measure up to your average on reading speed. It’s easier to just agree to keep your investment in books like Ohanian’s to a minimum.”

Would anyone ever read, Proust let’s say, if In Search of Lost Time came with a label telling you exactly how long it should take to read all 1.2 million (more or less) words? (We did it and documented it. For what it’s worth, it takes about a year, provided you spare some time for, you know, eating a sleeping.)

On the other hand, would people be warned away from “x” (fill in the blank with your own most dreaded title) if they knew just how much time they’d be wasting on reading it?

Giving estimates of time-to-read prose is not an entirely new idea. Several websites, such as curation website Longreads, offer estimates of how long it will take articles to read. And on these digital pages, it wasn’t so long ago — 2011, to be exact — that Todd Sattersten argued that the digital age demands that we rethink the way we quantify reading. His suggestion: word counts, which considering that many people read at different speeds, might be a more accurate, if less obvious assessment.

Read the article, it’s well worth your time. Oh, and it shouldn’t take you more than 4 minutes, provided you read at average page of 250 words a minute.