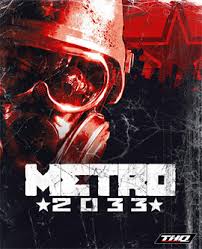 Dmitry Glukhovsky will be part of the StoryDrive program at the Frankfurt Book Fair on 11 October, where he’ll take part in the panel discussion, “Intertwined: The Story of the User, and the User’s Role in the Story.”

Dmitry Alexejewitsch Glukhovsky is a Russian author and journalist known for SF, magic-realism, and his exploration of social and political structures. He began writing his first novel, METRO 2033, at the age of 18, and then published it on his website in 2002, available for all to read for free. The novel has become an interactive experiment, drawing in over 3 million readers world-wide; it was also released as a popular computer game.

This was followed in 2007 by It’s Getting Darker, and in 2009 by METRO 2034 — Russia’s top-selling title that year — also available free online, both as text and as a collaborative art project with Russian electronic performer Dolphin and visual artist Anton Gretchko. This was followed in 2010 by a series of satirical stories about Russia today, Stories about Motherland. As a journalist, Dmitry Glukhovsky has worked for EuroNews TV in France, Deutsche Welle, and Russia Today.

He has lived in Israel, Germany, and France. And speaks English, French, and Hebrew fluently, reads German and some Spanish, as well as his native Russian. What do you expect from the StoryDrive conference?

Meeting narrative visionaries from across the world and tying new creative bonds, first of all. Russia is one sixth of the Earth’s surface, and yet it’s tiny. Truly interesting creative trends are now happening elsewhere.

What projects are you currently working on?

I have just published my novel FUTURE (http://futu.re), a utopia/dystopia that speaks of humanity where everyone is immortal and the Earth is overpopulated. This novel first premiered on social networks as a free-to-read text with multimedia elements (featuring its own original soundtrack). Only after that it became a paper book. Translations into major European languages are underway.

Another narrative I recently released is the “METRO: LAST LIGHT” video game. A continuation of the story I told in METRO 2033 novel on the post-apocalyptic Moscow, and the eponymous video game. Further plans include television shows, video games and Nobel Prize-winning novels.

Metro 2033 became a major success, not least by through the help of thousands of fans. How much external influence (democratization of media) is tolerable for the author’s creative processes?

The Metro saga is being told across different media – parts of plots can be found in books I wrote, others in the games based off my novels, yet others – in the books written by other authors for the ‘Universe of METRO 2033’ international book franchise, in which we already have close to 40 novels published. Authors from Russia, UK, Italy, Cuba, and soon Poland, Germany and China write their own intertwining stories set in the same coherent universe that I founded in METRO 2033. At least a half of these authors are actually fans that won our interactive contests for the best story and have become published authors — both in Russia and abroad.

So, I am actively using multi- and transmedia, crowdsourcing and social networking, as well as fan fiction to tell the stories I want to tell.

Having online support of your fans is great as long as you’re repeating yourself: fans usually want more of the same, they’re conservative and do not like when the author is experimenting. If you want to try something new, switch the comments off.

Please complete the following sentence: “In five years, books will be…”

Books will be electronic, equipped with soundtracks, co-written by authors and their fans, published on social networks, read from cell phones, bought with a click. The paper book will die, but the literature will just change the skin and reincarnate in a new body. Paper rots, yet books are immortal.