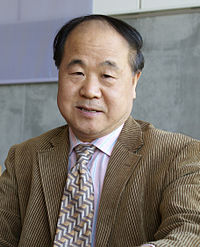 Chinese author Mo Yan, the 2012 winner of the Nobel Prize for Literature

Without a public shortlist of potential winners, it’s anyone’s guess who will win the Nobel Prize for Literature. With less than a month to go before the big announcement, plenty of people will speculate on which author will receive the prize of 8 million Swedish kroner.

For those of you who care to put your money where your mouth is, betting and gaming company Ladbrokes announced on Wednesday their odds on potential Nobel literature prize winners. Leading the pack is Japanese author Haruki Murakami at 3/1 odds, followed by American author Joyce Carol Oates (6/1), Hungarian author Peter Nadas (7/1), South Korean poet Ko Un (10/1) and Canadian author Alice Munro (12/1).

So is Murakami a sure bet? In The Guardian, Liz Bury writes that “Murakami has been considered a frontrunner for the past 10 years,” and his leading position this year is likely fueled by his much-anticipated, forthcoming book, Colorless Tsukuru Tazaki and His Years of Pilgrimage. Bury also reminds us that last year’s winner, Mo Yan, was given 9/1 odds by Ladbrokes, and the 2011 winner, Tomas Tranströmer, won with 10/1 odds.

The notoriously tight-lipped Swedish Academy won’t likely give you any hints before the prize announcement on October 1, so gamblers will have to rely on their own instincts when it comes to placing bets.

The Literary Saloon’s Michael Orthofer is disappointed with Ladbrokes’ list:

“…missing are any number of Russians (beginning or ending with Mikhail Shishkin) and Arabic writers (Ibrahim al-Koni, Gamal al-Ghitani, Bensalem Himmich, to name just a trio I’d like to see being discussed), any other Hungarians (Krasznahorkai, Esterházy), local favorites such as Mahmoud Dowlatabadi or Ayi Kwei Armah (admittedly an outlier), among a whole host of other names (and remember: Ladbrokes list 116!).”

Which author would you bet on to win the Nobel?