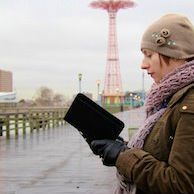 Ann Morgan came to my attention in 2011 when she sent out a request to readers worldwide for suggestions for books to read in translation. A Cambridge University graduate in English literature, and now a writer and editor, Morgan had set herself the challenge to spend one year reading a book from each of the globe’s 196 independent countries. The idea came about when she realized that even though she had always considered herself a fairly cosmopolitan person, most of her bookshelves were filled with works by UK and US authors,

In January 2012 Morgan set up a blog, A Year of Reading the World, and, at a pace of four to five books a week, began reading, in translation, fiction, and occasionally memoirs, from countries around the world. With help from readers spread across the globe, far-reaching research and countless emails, Morgan met her challenge and got a book deal to boot. Harvill Secker will publish her book, Reading the World: Postcards from my Bookshelf, in 2015.

Michal Shavit, the Editorial Director at Harvill Secker who acquired Morgan’s book said: “Ann’s book is the first of its kind to take us on a journey around world literature and to think about how different cultures think about books and storytelling.”

It is also an opportunity for Harvill Secker, which publishes roughly 50% of their books in translation to look closely at the books Morgan read on her journey that have not yet been published in English—Morgan sometimes had to read unpublished manuscripts when a work was not available to read in English—Shavit added, “I hope that not only Harvill but also other publishers will want to consider some of these for publication and that readers will want to reach out for some of those that are already published. There are some real gems in there.”

Following is an interview with Ann Morgan about how she went about her project. Before that, you can read her list of titles read here.

PP: Looking at your list, there are usually several books or more for each country. Did you actually read all the books on the list or is it a wish list?

PP: In an article for the Guardian you mention reading an unpublished manuscript. Will this be included in the book? In other words, will there be published and unpublished works?

AM: I read quite a lot of unpublished manuscripts of translations for the project because there simply isn’t literature available to buy in English from every country in the world. The unpublished works won’t be published in my book – I don’t have the copyright – but I will certainly talk about the most interesting examples.

AM: I read 197 books—one from each UN recognized nation plus Taiwan and plus one extra territory voted for by blog readers. They chose The Man in Blue Pyjamas by Jalal Barzanji from Kurdistan.

PP: Could you describe a few of the most touching exchanges you have had with readers/publishers or writers about their work?

AM: I had a lovely series of letters from the Honduran writer and painter Guillermo Yuscaran. He was delighted that I decided to write about one of his books on the blog and sent me a package of postcards of all his paintings and some more collections of his short stories. He’d even drawn a self-portrait of himself on the flyleaf of one of the books.

I also had a lovely exchange with the Burundian writer Marie-Thérèse Toyi. I had struggled to find a book in English from Burundi, so when a member of the United Burundian-American Community Association told me that he had been at school in Burundi with a woman called Marie-Thérèse Toyi who had written a novel in English, I lost no time looking for it. I couldn’t see how to buy the novel online, but I did find Marie-Thérèse Toyi. She was teaching at a university in Nigeria, so I sent her an email asking how I could get a copy of her book. She couriered me a copy, complete with a message encouraging me in my quest written inside the cover and we’ve been in touch ever since.

PP: Has your impression of literary translation changed since you began your project?

AM: Yes, I’ve come to appreciate what a skilled, intricate process it is and how vital translation is for cross-cultural understanding. It’s amazing that translators have traditionally had so little recognition. Even nowadays, it’s unusual to see a translator credited on the cover of a book. In all the 197 books I read, only my Japanese choice, Manazuru by Hiromi Kawakami, credited its translator, Michael Emmerich on the spine.

PP: If you had to pick five—or ten of your favorite books, what would they be?

AM: It’s difficult because many of the most interesting books I read are not commercially available — they were sent to me especially by writers and translators. However, my favorites among those books available to buy would be:

Ann Morgan is working on two new projects, the first is what she calls a web adventure, imagining what the world might have been like if women had been in charge from the beginning of time.

The second is a world bookshop challenge in which she is asking readers worldwide to send her information about their local bookshops and how many different countries are represented in the books on the shelves.