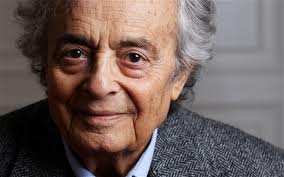 Last month at a talk organized by the Beijing Normal International Writing Center, Nobel Prize winner Mo Yan and Syrian-born poet (and perennial Nobel candidate) Adonis, (along with other Chinese writers) spoke on topics ranging from cultural identity, the spirit of introspection and the writer’s mission.

Adonis and Mo Yan, two authors who both reach an international audience, agree that the “one factor which facilitates and hinders their efforts is translation.”

During the talk, Mo Yan spoke about his admiration for Adonis, who, because he speaks both Arabic and French fluently, is able to become personally involved in the translation process.

He also admitted that for Chinese authors, the increasing possibility that their work will be published overseas has led to changes in the way they write. Unconsciously, he said, writers are using less regional dialects, unique cultural expressions, and even making adjustments to the smoothness of the writing itself, just to make the translation process easier.

“From the perspective of literature and art,” he said, ‘it’s undoubtedly a huge loss. My attitude is, forget the translators when you write. Care not about whether they feel happy to translate. The real talented translators aren’t afraid of difficulties.”

At the same time though, he added, “It’s not right either to require translators to be completely faithful because the search of a linguistic counterpart is a creation itself, full of imagination. I tend to be open-minded with the translators. I think we should allow them to trim the book appropriately on condition that doesn’t affect the gist as a whole.”

For his part Adonis agreed with Mo Yan, while acknowledging there are likely even greater difficulties inherent in translating poetry.

He told the audience that poetry is more than just how the language is structured, but also how thoughts and emotions are structured as well. And so, “in terms of the relationship between concept, language, and object, no languages are on an equal footing.”

“Therefore,” he said, “translators must break the original relationship between language and object, and establish a similar relationship and structure applicable to the translator’s mother language.”

But even though it’s difficult, Adonis believes that it is through translating literature and poetry that we can explore the mentality of “the others” at a deeper level, and that the importance of translation is that it should serve as “the most fundamental element of world culture in the future.”

He added that, “The importance also lies in the language that a translator uses, especially one that he uses while translating poems. It can enrich his mother tongue. To some extent, it can change the structure of his mother language.”