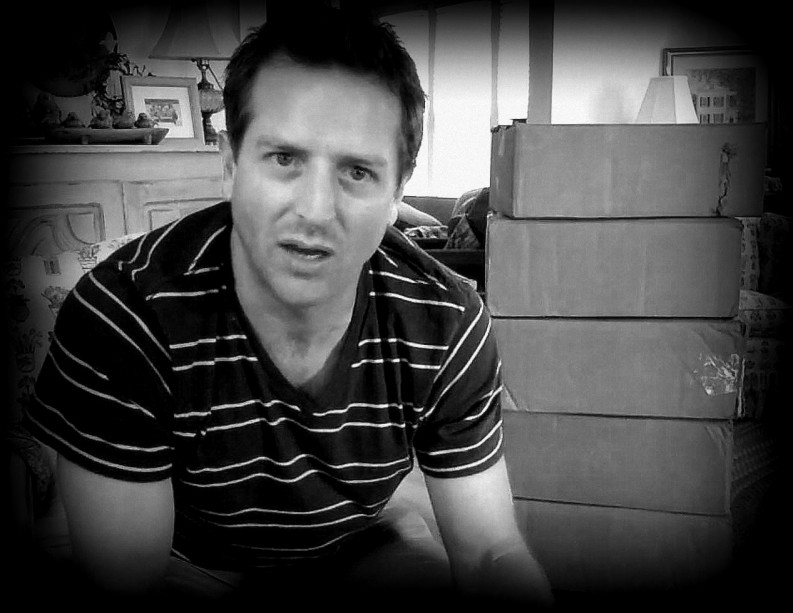 “Indie authors are maniacally focused on the reader.” Hugh Howey unboxes the first shipment from CreateSpace of his newest novel “Dust” on camera for his readers. The self-publishing phenom thanks Jason Smith of his traditional publisher Random House UK for designing the trilogy’s radiant covers and thanks Random House for letting them be used throughout the English-language territories.

If publishers price their ebooks low enough…readers will buy more than one version of the same book.

Speaking earlier this month, a few days before Amazon announced its MatchBook plan to offer “bundling” of low-cost or free ebooks with print book purchases, self-publishing entrepreneur and hybrid author Hugh Howey was — as seems usual — a bit ahead of the game: “Ebook-plus-audio or ebook-plus-print,” he told Publishing Perspectives in an interview. “Ebooks should be seen as both an add-on and an entrance to other products. They should not be seen as competition to print and other formats. Giving away an ebook with every sale of a hardback would do wonders for the hardback market.”

What’s more, Howey had what might be a controversial but potentially ingenious suggestion: an imprint created expressly to market ebook bestsellers in print.

“The first major publisher who creates an imprint dedicated to this model will do very well for their bottom line,” he said. “It just requires thinking outside the box, not worrying about upsetting other publishers (who should be their competitors), and seeing the publishing relationship more as a partnership and less as an acquisition.”

Howey will be a featured speaker at this year’s CONTEC Frankfurt Conference on October 8, joining the Interactive Learning Lab session, “Self-Publishing and Its Implications for the Industry.” He’ll be joined by his literary agent Kristin Nelson of Nelson Literary.

Howey is one of the most closely followed of today’s elite club of international entrepreneurial authors whose self-publishing success brings them enviable sales in the millions, both in dollars and units. Among writers and a lot of readers, this is a rock star.

His latest release, Dust, the third book in his Silo Saga trilogy, debuted at No. 7 on the New York Times Best Seller List (combined print and ebook listings) and sold some 50,000 copies in its  first week on sale.

With Nelson’s representation, Howey inked a print-only contract with Simon & Schuster in the US for Wool — released in stores on March 12 of this year — and with Random House in the UK for the trilogy. Hollywood A-list director Ridley Scott optioned the film rights to Wool with Oscar-winner Steve Zallian slated to write the script. A shot of Wool on sale in a bookstore window in Australia.

How To Be “Maniacally Focused on the Reader”

Howey is part of a generation of writers who have leveraged new media to develop direct personal relationships with readers.

For example, in a recent video blog he showed off the amber Dust hardcover as it arrived from Random House UK. The moment was typical of how faithfully he shares such high points with “you guys,” his loyal ragazzi. This time, he explained his fondness for paper-over-board printing. If his fans agreed that the format is preferable to loose dust jackets, he said, “You might want to let publishers know…you want more books made like that. Well, I don’t know if they’d listen to you. But make your voice heard.”

In It’s the Reader, Stupid, a synopsis of a longer essay, Howey pressed home one of his key messages for today’s writers:

Indie authors are maniacally focused on the reader, almost to the exclusion of anything else. Low prices, fun and interesting genres and styles, a direct relationship, frequent output, you name it. Indie authors are doing well because they know it’s all about the reader.

Howey’s guileless enjoyment of every aspect of his career and his willingness to travel and engage with his fans on his own dime — flying or driving from meetup to release party to book fair to This Con and That Con — keeps him “up to date on the status of the industry and energized to keep writing and working hard,” he said.

To get a sense of just how committed he is, take a look at a recent slice of his promotional activity:

Looking ahead to his first visit to the Frankfurt Book Fair, we wanted to know what advice Howey might offer to publishers based on his own experience.

He went straight for pricing: “Related to competition between formats, backlist ebooks should not be seen as competition to frontlist ebooks,” Howey said. “There seems to be some hesitation to lower the price of older titles. Publishers can drastically cut the price on these books without cannibalizing new releases. This is partly because of our willingness to collect books we’ve already loved and enjoyed in other formats.

“That brings me one of the strangest phenomenons with low-priced ebooks: readers will buy ebooks that they never go on to read, and they won’t feel a single ounce of regret about this. Physical books clutter our homes and sit as reminders of all that we aren’t reading. There’s a psychological cost to buying a print book that includes where we will store the book, the fact that we have a massive TBR [to be read] pile leaning against the wall by our beds, and that we’ll have to box up and move these books. Also, when we don’t finish a book, there is a psychological cost to the money spent. This disinclines us to buying more books.

“Ebooks change all of these calculations. If they are inexpensive enough, they will sit on devices the way underused apps sit on smartphones: paid for, never opened, and not competing with the next sale. There’s no buyer’s remorse. No physical clutter. This is a topic, these psychological forces, that goes unexplored, but is crucial to pricing strategies.” If Howey were in a room with his top 30 global self-publishing author-peers, what would he hear them talk about the most?

He mentioned “more transparency in publishing deals, a new backend that gives near real-time sales data and pays monthly rather than biannually. The technology is there.

“Inventory and sales management,” he said. “You can’t press a button and tell how many books you’ve sold in a month or over your lifetime. My agent wants this information, and it requires going to Amazon, Nook, Kobo, iBookstore, ACX for audiobook sales, CreateSpace for physical sales, my website for direct sales, and then checking with publishers.”

“Another thing I’d hear from the top 30 authors is their amazement at secondary markets and their frustrations with English-language markets. Every top-selling indie author I know is doing very well with audiobooks. Better than major publishers do with comparable print and ebook sales, in fact. I had a six-figure offer for the audio rights to the Silo Saga. I’ve made more than that on my own in less than a year, and those earnings will continue for many years to come.

“Another secondary market that these top 30 authors would rave about,” Howey said, “is a market I value as highly as my home market — foreign publishers. I think the top authors would all remark on how powerful translation rights are and how fair the contracts are. The limited terms of license are something we’d love to see in the US and the UK.

“We want less money up-front and a better split down the road, or a road that has a finite end in sight where we can renegotiate. I think publishers would do well to move away from massive advances and embrace more of a partnership with authors, especially the entrepreneurial ones who are already earning a great living and don’t want to give up their monthly wage in exchange for a one-time windfall.”

More Speed to Market Is Needed Howey has an interesting take on the speed needed to get a runaway-hit ebook into the print distribution it needs.

“There should be a better way to get a hot ebook into the hands of print book readers. Fifty Shades of Grey was a model for this, with books turned around swiftly with not a lot of manipulation in order to capitalize on demand. Successful ebooks shouldn’t be treated like manuscripts, in my opinion. There’s an existing readership to tap into, and time is of the essence.”

At one point in the interview, Howey made it clear that he doesn’t look on traditional publishing with hostility, as is sometimes assumed about self-publishing authors.

“I think most self-published authors understand and appreciate the power and capabilities of major publishing houses,” he said. “They know the cover art is generally better, that there’ll be help with blurbs and endorsements, and that print distribution will be stronger. But I also think they understand the limitations of major publishers better than even publishers are aware of them, and this cost analysis makes many of us wary about giving up our rights.”

Howey has no delusions about the plethora of available content these days.

“Publishers are in a situation where the supply of manuscripts is so great that they can ignore self-publishing bestsellers and still have their pipelines full of content,” he said.

“But publishers are also risk-averse, and a bestseller is a bestseller. They just need to learn which books make this transition the best. And they should embrace leaving well enough alone, while trying to add value. I know indies (I’m one of them) who are making six figures a year on their print-on-demand books who would gladly hand over the rights to these books to publishers for them to get them out to bookstores.

“We would take the hit on earnings just to cultivate a relationship with publishers, booksellers, and print readers. That’s guaranteed and easy money for publishers, but without the upside of digital sales.”

Publishers are Backing Off of Print-Only Deals When it comes to his proposal of developing an imprint specifically to port bestselling ebooks into print, Howey conceded, the prospects may not be good.

“Publishers seem to be circling the wagons and backing away from print-only deals,” he said. “They have enough books to take all the rights for that I don’t think they want to set much precedent with the print-only deals. Wool did well for Simon & Schuster, despite their problems getting the book into Barnes & Noble bookstores [because of retail contract negotiations, now resolved], so there is money to be made here.

“But they know that ebooks are the way forward for profits. The only offer we’ve had has been for all rights, print and digital.”

And that being the case? It is good to be Hugh Howey.

“I’m in no hurry. I sold over 6,000 print books this month through Amazon and directly to readers. These are self-published print-on-demand books. I could live comfortably on these sales alone, so I can afford to hold off for a deal that makes sense to both sides.”

At CONTEC on October 8, Hugh Howey and his agent Kristin Nelson will be joined in our special session on self-publishing and its implications for the industry by colleagues including Peter Armstrong of Leanpub; Amanda Barbara of Pubslush; Jon Fine of Amazon; Jonny Geller of Curtis Brown; Florian Geuppert of Books on Demand; journalist Matthias Matting; and Michael Tamblyn of Kobo. More information is at the conference’s site. A 20% discount is available on registration with the use of the code CONTEC13KPTW20. Pre-registration for the special session is encouraged.