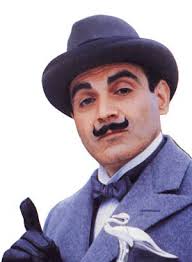 Monsieur Poirot is back from the dead.

The Agatha Christie estate has sanctioned the first new Hercule Poirot story for nearly 40 years, to be written by the British crime writer and poet Sophie Hannah.  The untitled novel will be published on both sides of the Atlantic by HarperCollins next year, with the deal being concluded by UK agent Peter Straus of Rogers, Coleridge and White with Harper’s William Morrow imprint in the US and Acorn Productions in the UK, the company that handles the Christie estate.

The announcement has caused something of a stir, not least at a grand house in the Sussex countryside…

Here at the Home for Retired Fictional Detectives — Dunsolvin’ — they’re all in a tizzy. That nice Mr Poirot, whom they all assumed was dead since he hasn’t been down to breakfast since 1977 (mind you, you should see what they serve), has got a new case to solve!

“Does it involve a train?” asks the Reverend Awdry, who really shouldn’t be in here at all. “The Orient Express again perhaps! I may have some people who can help. Gordon was very good when the shunter went missing.”

“If you ask me, he won’t be able to cope,” harrumphs Lord Peter Wimsey, the effect rather spoilt when his Pinz-nez falls into his All Bran. “He’ll need all the help he — Damn and blast! There’s glass in my cereal! Nurse!!”

A woman who still has a hint of youth despite her 82 years looks up from her coffee. It’s Nancy Drew! “He’ll find it difficult. I think he’s lost Miss Marple, you know.”

“What are you talking about?” replies Father Brown, rather angrily for a man of the cloth. “She’s over there,” he continues, pointing to an elegant woman reading The Lady in the bay window.

“I said ‘I think he’s lost his marbles.’ I’m well aware that Miss Marple is still with us. She solved the mystery of the missing HobNobs you will recall. Are you going deaf?”

“It’s about a quarter to nine!” they all chime when they hear this, Inspectors Wexford and Morse, and that nice Inspector Ghote from Mumbai and the strange Dutchman Commissaris Simon ‘Piet’ ‘we have ways of making you’ Van der Valk, and even Sherlock Holmes himself.  It’s their little joke. Senile? They’re still at the peak of their abilities this lot. It’s just that the stairs are a little difficult these days.

The laughter is stopped by a curious scraping sound from the back of the sun lounge. Everyone turns to see a blonde woman running her long finger nails down the board on which the day’s activities are chalked up (‘Fun Forensics, 11am’, ‘Autopsy Aerobics, midday’, ‘That’s not dribble, that’s DNA!’ 3pm).

Everyone winces at the horrendous sound. Only Philip Marlowe is brave enough to speak. “Lady, I may be older than that dresser but I know a cultural reference when I see one and that’s a scene from Jaws and this is about detectives-“

“Shut up before I do the same to your back. Only not in the circumstances you might be hoping for. And you were swimming with the fishes by the time Jaws had been made anyway.”

The cheek! It’s the new arrival they’d been told about. It’s that Jane Tennison from Prime Suspect. It must be her because she’s 97 but looks 38.

“Now listen,” says the blonde one. “It seems that our Mr Poirot has been kidnapped by a feisty little madam called Sophie Hannah. She posed as one of those health care assistants and crept into his room with something she called a contract from some heavy called Straus.”

All heads turn to see a man in a white raincoat. Hannah’s agent? Don’t be silly. It’s him again!  There’s no time to dunk any more biscuits. Chief Inspector Dreyfus screams: “I will kill you Clouseau!” and launches himself across the tea trolley – and so another day at Dunsolvin’ begins.