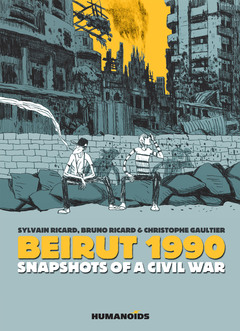 If the idea of comics-form journalism has yet to go mainstream its advocates can at least point to a few skilled proponents, such as cartoonist Joe Sacco, author of the widely-acclaimed Palestine, or Quebec-born Guy DeLisle whose travelogues, including Pyongyang and Shenzhen, have been both critically and commercially successful. Even so, examples of quality comics-form reportage remain thin on the ground. Last month a new example slipped quietly into print in the form of Beirut 1990: Snapshots of a Civil War, a translation of book originally published in France in 2004 as Clichés Beyrouth: 1990.

In fact, given that the book describes events that occurred during a war that ended 23 years ago, “journalism” may not be the most appropriate description, but with the horror unfolding today in next-door neighbor Syria the book feels eerily fresh. Writer- brothers Sylvain and Bruno Ricard and artist Christophe Gaultier transport us to the wrecked cityscapes of the Middle East, where an extremely complicated internecine war between religious and ethnic communities is raging as the outside world looks on in horror, “informed” by a media offering simple explanations where none exist. Plus ca change.

But the Ricard Bros really are writing about Lebanon and not Syria, and not only that but they are writing about it on the basis of very limited experience: by their own admission they were in the country for slightly over two weeks in 1990, visiting an aunt who worked for the Red Cross. The Ricards brought over some medical supplies and then tried (and mostly failed) to find somebody in the country willing to employ them on the basis of their First Aid training. Meanwhile, they took pictures and recorded their impressions, and the resulting book offers what the subtitle states: “snapshots” a collection of fragments, images, ideas, and snatches of conversation. Artistic Recreation of Long Ago Events

Then again, perhaps “snapshots” is — like journalism — a not quite appropriate description. The book’s artwork is crucial in this regard: Gaultier was not in Lebanon but reconstructed the brothers’ trip from their photographs. However rather than do so in a realistic style, he executed his drawings freehand, in loose pencils with a soft, even scribbly quality. There’s a drawing of an airplane on page 10 so ropey I assert with confidence that I could do better, and yet I acknowledge that unlike Gaultier I could never find work as a production designer at an animation studio. His loose, unfinished style interprets the brothers’ experiences not so much as “snapshots” but rather as a sketchbook, vital and subjective and improvised, as if Gaultier himself had been on the spot in 1990, recording real time experiences as quickly as he could, rather than recording processed and compressed versions of events told to him by others well over a decade after they occurred.

It is a clever and highly effective illusion, perfectly calibrated towards both the limitations and advantages of telling the story in cartoon form. If the brothers had tried to turn their brief experience of Lebanon into a prose book for example, they would have failed miserably due to a lack of material- even if they had resorted to the classic travel writer/journalist trick of fleshing out insufficient experience and knowledge with paraphrased history and analyses nabbed from specialists. But the Ricards and Gaultier are also keenly aware that the medium they are working in has different rules. They know that most graphic novels only take an hour or two to read; that the form cannot except in extremely skilled hands hold very much baggage; that they could not go deep even if they wanted to; and that Beirut 1990 is fundamentally a visual book, a work of surfaces.

And yet it is remarkable how much can be learned from surfaces. The Ricard brothers may simply tell us what they saw, but what they saw is nevertheless fascinating in that that it depicts a vision of war rarely seen in traditional journalistic forms, which tend to focus on publishers’ and broadcasters’ “erogenous zones” of conflict, atrocity and trauma. Instead the Ricards depict quietness, boredom, long lulls between outbreaks of conflict, and small struggles to maintain one’s dignity — while also recording everyday absurdities such as a traffic sign that bans tanks from traveling down a street. In this their book is reminiscent of Guy DeLisle’s work, which also exults in the unique capacity of comics-form journalism to focus on images and surfaces, on the moments in between, on frustration and an inability to communicate, on a freedom from the requirement to provide “in-depth analysis.”

Exploiting the Form for Effect

By embracing and indeed making explicit both the limitations of their experience and the restrictions of the form the Ricard Bros are able to provide the reader with a (most likely) unfamiliar sense of the texture of everyday life in a war zone, where — most of the time — war is not actually being fought. Thus we see a nun hanging about making jokes; a cluster of refugees stuck in a basement watching Rocky 3 as bombs rain down; a shy young girl falling in love; and families out for an afternoon eating ice cream. Honest recorders of what they saw, the Ricards are unflinching when it comes to depicting their own naiveté and insensitivity — at times it is excruciating to read the enthusiastic responses of their younger selves to being in a war zone. They also record the reactions of those they met, which ranged from gratitude to outright hostility.

Even so, the book is not all about the understated “moments in-between.” As the narrative progresses, the brothers move from understanding nothing about the war in Lebanon to understanding something; and while they never claim expertise it is clear that after mere days in the country they already knew that everything they had been fed by the French media was either gratuitously simplified or plain wrong. At the end they reproduce a letter from a friend in Lebanon explaining that the “Pax Syriana” ending the conflict was not the happy event they saw being reported on French TV rather a brutal invasion and occupation carried out by Syria with the clear goal of establishing its hegemony in the region “…with the West’s blessing.” Their friend explains the misreporting as a consequence of Western powers’ pursuit of Syrian backing for the then-impending assault on Saddam Hussein’s Iraq.

Truth is always the first casualty of war of course, and nothing will ever change in that regard.  But it is precisely for that reason that — as the brothers Ricard and their artistic collaborator Gaultier know well — journalism sometimes needs to wait a while before it can reflect the world even partly accurately.