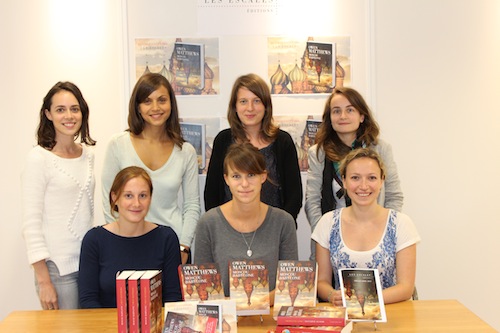 In France la rentrée littéraire—that particular time of year when French publishing houses release hundreds of books—is in full swing, with with 555 books, both in the original French and in translation, seeing publication in one massive push.

Typically, the giants of the French publishing industry command much of the attention. One wonders how a small publisher can be noticed, when — for example — Gallimard has 16 new novels out all at once.

Les Escales, a fledgling publishing house that specializes in literature in translation, is giving it a try. The young publisher is launching, among other novels, British-Russian author Owen Matthews’ Moscou Babylone (Moscow Babylon), which tells the story of young man who leaves England for Moscow in the 1990s. Matthews, a journalist cum-author whose critically successful non-fiction book, Stalin’s Children was published by Bloomsbury in 2008, was coaxed by his French editor to take the first step towards fiction. He wrote Moscou Babylone in English; it was then translated into French. Les Escales holds world rights to the novel except for English language.

Véronique Cardi, who founded Les Escales in early 2012, worked with Matthews when she was an editor at Belfond and published the French edition of Stalin’s Children, which was shortlisted for two important literary prizes and was a commercial success to boot. When Cardi started up Les Escales, she picked up the idea of a fiction project once again with Matthews, working on the text with him in English. She also offered him a substantial advance. Matthews, who had just submitted the manuscript of his second non-fiction book, Glorious Misadventures, to Bloomsbury, and was witnessing the disappearance of his employer of 15 years, Newsweek magazine, decided to go with his French editor. He retained his English language rights because “I was afraid that it might not work…[it was] purely for reasons of embarrassment in case it turned out to be a terrible train wreck,” said Matthews.

Cardi and her team have high hopes for Moscou Babylone in France and at Frankfurt; rights have already been sold to Graf Verlag. Cardi’s approach with Matthews, although rare, is not unheard of. Another author published by Les Escales in French, Derek B. Miller, after having had his manuscript rejected by Anglo-Saxon publishers, first published his crime novel written in English, Norwegian by Night, with Norwegian publisher Cappelen Damm who translated it into Norwegian. After commercial successes in Europe, it was subsequently bought and published in English by the Australian Scribe Publications, then Houghton Mifflin Harcourt in the US and Faber & Faber in the UK.

That Les Escales, which Cardi describes as “a journey in literature with novels from all countries,” was launched in choppy economical waters is not an uncalculated risk—it is an imprint of Editis, the second largest French publishing group, and Cardi and her team are all young and tech and marketing savvy. With deeper pockets than most independent publishers, Cardi takes calculated risks, balancing the 15 books per year on her list between best-selling cliffhangers by Jeffrey Archer on one end, and more serious literature such as Ismet Prcic’s Shards on the other.

“We had very precise objectives,” said Cardi firmly. “I look for stories about families with an historical context. I look for a personal, social side to the stories.”

The decision to translate British author Victoria Hislop has been a real coup for Les Escales: Hislop’s best-selling 2005 novel, The Island published in French last year, sold a total of 300,000 copies. Les Escales also publishes award-winning Spanish author Juan Jacinto Munoz Rengel, and Paolo Roversi, whose crime novels set in Milan have been hugely successful in Italy. Cardi additionally makes it a point to look for German novels that she feels will sell in France.

“I would like to publish a German book each year. German literature is a hard sell in France because it’s seen as being too experimental, or austere. So I’d like to help people discover it.”

Cardi bought the rights to Eugen Ruge’s In Times of Fading Light (just out in English) before it won the German Book Prize and it has done well in France, selling 30,000 in large format.

Matthews said his French editor was much more “hands-on in saying what needed to change, what worked and what didn’t.”

According to Matthews the French are also very good at publicity.

“Les Escales have invited me multiple times to a series of signings and literary festivals, sparing no expense. They also have fought hard to get the book well placed in the bookshops, to sell the book to independent booksellers, and to get the book top billing in festivals… French publishers work harder, spend more money, and, surprise surprise, sell more books. Moreover, there seem to be much more programmes and pages in France’s media dealing with books, and the public seems far more engaged in the literary life than in the UK. I am very impressed. At Etonnants Voyageurs a few years ago, for instance, I was amazed that literally hundreds of people would show up to hear lectures on Russia.”

Being small yet part of much larger machine definitely has its advantages.

“We can position ourselves on authors who are successful. At the same time our production is small and we can really work on launches,” said Cardi. Veronique Cardi (in rear, second from the left) and her team.

With a small staff and the use of Editis’ digital team, Les Escales invests in applications and promotional videos (seen above) for their authors, which so far has paid off. (E-book sales remain low, in the range of 2-3%, consistent with the French market.)

Cardi and her team will be at Frankfurt selling rights not only to Matthew’s novel, but also to crime novels by French authors, all the while looking for authors from Japan, China, South Africa or Latin America.

Olivia Snaije’s most recent book, Keep Your Eye on the Wall: Palestinian Landscapes, is published in the UK by Saqi Books today.