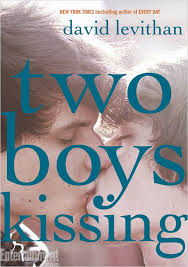 For someone of my age, who grew up gay in the small town (OK, village) of Paw Paw, Michigan, the idea of what it actually might mean to be gay was something both frightening and frighteningly nebulous. I knew I was different, that what I wanted (or thought I wanted) was different, but there was nothing to teach me what it meant or could mean to be a gay man. Straight men had parents and siblings as well as books, television, movies, parents — everything in the culture both pop and otherwise was there to teach and show “men” what it meant to be a man. For me, there was Paul Lynde and not all that much else. (I was sixteen before I ever saw two men kiss. It was a production of Marlowe’s “Edward II” on PBS — I remember it well.)

All of which goes to say that a book like David Levithan’s extraordinary Two Boys Kissing (Knopf) could never have existed when I was growing up. The world it describes, a world of gay proms, of online hookups, of open romantic relationships among boys, of openly sexual relationships between boys, is a world I never could have imagined or dreamt of in my wildest fantasies.

There are actually more than two boys kissing. There’s one couple in love, Peter and Neil, who have been together for one year. There’s blue-haired Ryan and pink-haired Avery, who meet at a gay prom and are in the process of falling in love. There’s Cooper, the closeted loner, whose only contact with the world is through online porn and chat rooms and hook-up sites, and whose accidental outing of himself to his parents sends him out into a real world he’s not at all prepared for. And there’s Craig and Harry, once a couple, but now, after a friend of theirs is gay-bashed, standing on the front lawn of their high school, trying to break the world’s record for the longest kiss (thirty two hours, twelve minutes and nine seconds), while the town gathers to watch, and the rest of the world watches in increasing numbers over the Internet.

Levithan interweaves these stories like the master he is. And if that was all the book was, it would still be a groundbreaking work of YA literature. But in a stroke of what can only be called genius, the narrator (or narrators) of Two Boys Kissing are the ghosts of the previous generation of gay men; the generation nearly destroyed by AIDS.

“If you are a teenager now, it is unlikely that you knew us well. We are your shadow uncles, your angel godfathers, your mother’s or your grandmother’s best friend from college, the author of that book you found in the gay section of the library. We are characters in a Tony Kushner play, or names on a quilt that rarely gets taken out anymore. We are the ghosts of the remaining older generation. You know some of our songs.

We do not want to haunt you too somberly. We don’t want our legacy to be gravitas. You wouldn’t want to live your life like that, and you won’t want to be remembered like that, either. Your mistake would be to find our commonality in our dying. The living part mattered more.

We taught you how to dance.”

It is through those shifting perspectives, from the young boys of the story to the voices of the generation past who look on in wonder and happiness (tinged with envy) at a new world, that gives the book it’s extraordinary power and emotional heft.

This is a book not only for its intended YA audience. It’s for adults as well, for parents of gay kids, for teachers of gay kids, for anyone who loves the pleasures of a great read, but perhaps especially for those of us from the previous generation who survived, who remember what it was like before Ellen, before DeGrassi High, before Glee and Klaine, before gays became part of the mainstream and not stereotypes lurking on the fringes; the world that existed before David Levithan could write a book called Two Boys Kissing.

Last week I mentioned to author Beth Kephart that I was going to read Two Boys Kissing. She told me she wanted to know what I thought about it. After I finished, I told her that I loved the book. “Of course you did,” she said, “it’s a masterpiece.”

Beth’s correct, of course. It is a masterpiece. And one I’m elated that I was alive to be able to read.