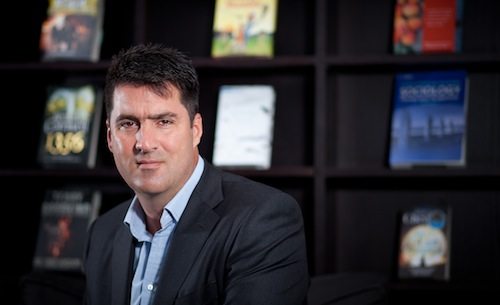 More consolidation both among publishers and agencies, the importance of adding value, and a desire to push digital into places perhaps not yet thought of are among the issues exercising Charlie Redmayne, the new CEO of HarperCollins UK.  Barely two months into the job he says he is feeling “immensely energized” and he has a clear vision of the kinds of areas he wants the company to explore.

“One of the things I tried to do at Pottermore [the Harry Potter online experience and e-store which he headed up from 2009 to 2011] was to start thinking beyond the business that is ebooks. Now, ebooks are going to be a hugely important part of what we do, and a growing marketplace and a fantastic way for people to read books. But it’s not the limit of digital opportunity.

“There are many ways that we can tell stories. So, as a publisher we need to think about ways that we can tell stories on the devices that people are now consuming their content on, using the functionality of those devices to create the best experience.  And in our education business we need to think how that classroom environment is changing. We’re moving towards a world whereby in the next five years the key learning device and tool is going to be a tablet device in schools.” While the creation of apps will still be important, he says the company won’t just spend £20,000 on an app and see if it can make its money back. “We’re going to be doing things more along the lines of what I did at Pottermore with things like The Book of Spells where we took a work of fiction created by J.K. Rowling, but as opposed to publishing that as a book or an ebook, we published it as an augmented reality experience on PlayStation Three. Now that can subsequently become a book, or an ebook, or all those different things, but we need to think about how content can be experienced and enjoyed by different audiences on different devices.”

It’s fair to say that it was a difficult arrival for Redmayne, coming in after the sudden departure of the popular and much-respected Victoria Barnsley. “There was immense shock when she left, from staff here, from authors and from agents, and I completely understand that. Vicky is someone I have the greatest respect for — she was an immensely influential publisher, and remains an immensely influential person in our industry. She was an instinctive leader who had skill sets I don’t have. I see my role to empower my publishers and my editors to acquire the right content. I do want to be across it, I do want to be involved in those decisions, I do want to understand those decisions and I do want to read those books or understand why we would be buying those books. But ultimately I see where I can add most value is, once we’ve made those decisions, how we actually then market them, how we create experiences around them, how we sell them — the supporting elements of that publishing process I think is where I add value which is different to my predecessor. It’s still important, but it’s just different.”

On Print vs. Digital, Tradition vs. Innovation

On the question of where the ratio of print to digital will settle he smiles. “There’s this attitude that things settle. I don’t ever see anything settling. I think that industries permanently change and I think that people within industries are permanently innovating and creating new ways and I think that in ten years time we’ll be sitting here telling stories on platforms we haven’t even considered yet.  So the answer to that is I don’t know.

HarperCollins’ annual Author Party last year coincided with Barnsley’s departure and turned into her wake. The historian Max Hastings gave an address in which he famously likened publishing to “Paris in the last reign of terror — they’re setting up the guillotines.” He was hamming it up, of course, and exaggerating because he had the stage — but one wonders how Redmayne sees the industry.

He smiles again. “I love Max Hastings, but I wasn’t there to hear that speech. I see publishing as an industry with terrific potential and in rude health. I think there are very considerable challenges that we all have to face, not just publishers — I’m talking about agents, I’m talking about retailers, everyone in that value chain. You need to understand if you’re in the value chain how you add value as change happens, and we will do that.

Some agents are already changing, he notes, adapting to the blurred lines that are becoming common now. “People like Jonny Geller at Curtis Brown, people like Neil Blair at the Blair Partnership actually becoming producers of content, producing television programs themselves. You’ve got some of them looking at direct sales businesses, digitizing backlist ebooks that are not being digitized by publishers quickly enough, taking the rights and selling them direct to consumers, or through other retail channels.  So they’re becoming kind of retailers, or indeed publishers, and pushing it through to retail channels.

“Many authors are sitting there thinking how do I build a social media profile, how do I get a number of followers on Twitter, how do I get influence in a digital world? And a lot of agents say ‘well, the publishers should be doing that for you’ and they should, but actually, if they’re not, don’t sit there saying ‘they really should be doing it,’ why don’t the agents do it themselves?  Why don’t they provide that service as agents and really manage the career? I think some agencies will do that and I think the agencies that do that will become bigger and more powerful, and I think that the agencies that don’t do that, many of them will continue to add value but I think some of them maybe won’t.”

Redmayne’s background is very different from others in publishing (apart from the private education). Many in the industry have been in it pretty much their whole working lives. Not so 47-year-old Redmayne. After Eton, he spent eight years in the army, serving with the Irish Guards, a period he describes as “gloriously ungallant.”

“I’d love to tell you I was a great warrior hero. I can assure you I wasn’t. I managed to fit my service in perfectly between the end of the Falklands War and the beginning of the first Gulf War, so no one shot at me and I’m extremely glad that they didn’t. I was very lucky that I was a sportsmen and a games player. I managed to play cricket for the army and combined services, and football for the army.”

After the army he moved into the entertainment and communications industry, starting at UK-based breakfast TV business TV AM, and then founding his own businesses, RCL Communications and Blink TV. In 2000 he moved to one of the UK’s leading web publishing businesses, MyKindaPlace Ltd, which was sold to Sky in 2006 where he became Head of Commercial Partnerships before moving to HarperCollins as Chief Digital Officer in 2009. Then came Pottermore in 2011 and his subsequent return to HarperCollins, only this time to that top-floor corner office with the fancy view.

He says he loved his time in the army and that he learnt some valuable lessons. “It taught me that you’ve got to make a decision. I think that ultimately in business, where business falls down is where no decision is made. You can’t always make the right decision, but what you have to do is think it through, come to a decision and go for it. And if you make the wrong decision, try and fix it. But if you make no decision, it will fall over.”

When you join the army as an officer, the soldiers, the “squaddies,” like to give you a nickname. Redmayne reveals that his was “Running Bear” because “I always had rather long hair for a soldier…”

He then tells a shocking story. “I was walking across the parade ground one day and I heard someone shout “‘ere, it’s 18 months.’ And I thought that’s very odd. Now, when I was 18 I had my left ear bitten off. I was beaten up by a bunch of Chelsea supporters on a bus. It became quite a bit story and it was in the newspapers and stuff like that. This was something the guys knew about. So I heard this shout — ‘ere, it’s 18 months.’ And I saw the guy and I ran over and he said ‘Sorry sir, sorry sir, no offense meant.’ And I said ‘none taken, but I just don’t understand. Why am I called 18 months? And he went ‘18 months — an ear and a half.’ I thought that was genius army humor…”

Married with a 16-year-old daughter and 12-year-old son, his home is in Wandsworth, in south west London. He plays cricket for the Hurlingham Club and lots of sport with his son. And he reads, a topic on which he has engaging honesty. “I’m incredibly lucky in that, contrary to popular opinion, I am passionate about books, so the opportunity to read the books that we publish is very exciting to me. I cannot pretend that I read all our books, and I couldn’t possibly read all of our books. But I like to read a lot of our books, and read some of most of our books so that I can understand the publishing that we do.

“I’ve just finished The Pagan Lord by Bernard Cornwell. He is my favourite author and I’ve read every single book he wrote.  I’m reading Joanna Trollope’s Sense and Sensibility, which is the beginning of our Austen project and is a modern-day take on the novel. We had a drink the other night and we discussed it and to see her passion for the project is very exciting. And I’m reading another book which at the moment is in manuscript form but it’s a really interesting project and is something I very much hope we will publish.”

He is looking forward to Frankfurt and notes that it will be his first fair as a CEO of a publisher — “and I’m told that the loneliest person at a fair is the CEO because nobody wants you in their meetings.”

Without doubt he is passionate about the publishing industry, but he believes its future needs careful stewardship. “The publishing industry has been one of the most innovative and creative industries for hundreds of years, and yet when it comes to digital we’re ceding that innovation and creativity to media content developers and others. We should not cede it. We need to own that innovation and creativity in the way we have always done for the last few hundred years.”