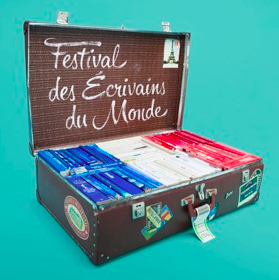 The Festival des Ecrivains du Monde will take place in Paris September 20-22 and will head to Lyon September 23-24. Now director of Columbia University’s Global Center in Paris, LeClerc, a scholar of French literature (and a Columbia University graduate), felt that an international literature festival in Paris was missing—while there is a festival of North and South American literature held in Paris every two years, and a yearly North African literature event, it is true that Etonnants Voyageurs, the 23-year-old, much-lauded world literary and film festival is held in Brittany, about 400 kilometers from the capital. The festival will also be a good way for Columbia to have more of a presence in France — unlike Europe the US lacks a centrally administered cultural policy abroad, such as the Institut Français or the Goethe Institut.

LeClerc recruited the highly respected Caro Llewellyn to direct the festival. Llewellyn put the Sydney Writers’ Festival on the map, went on to run four World Voices Festivals of International Literature for PEN in New York before being headhunted by Paul LeClerc to run the New York Public Library’s centennial in 2011. Organizer Caro Llewellyn attracted a top roster of authors in less than a year.

For the Festival des Ecrivains du Monde, LeClerc formed a partnership with France’s national library, the Bibliothèque Nationale de France or BnF, as it’s commonly known, and between their mutual connections and LeClerc’s renowned fund-raising abilities, the festival became a reality, with some events being organized in the city of Lyon as well. Other national and private venues or organizations donated space and funding, (including the region of Ile de France, the Ford Foundation, the Felix and Elizabeth Rohatyn Foundation and the Stavros Niarchos Foundation), and Llewellyn got into the starting blocks in October 2012, much like when she hit the ground running when she arrived in New York from Sydney in 2006.

A little less than a year is not a long time to organize an international literary festival that will bring together thirty or so top-notch writers from across the globe but Llewellyn has done just that.  Although many international authors are in France during the fall to promote the publication of their books during the literary season, Llewellyn said that they are bringing over all their guests, who include Chimamanda Ngozi Adichie, Elif Shafak, John Banville, Ma Jian, David Grossman, Salman Rushdie, Antonio Skármeta, Michael Ondaatje, Edmund White and Ahdaf Soueif, to name a few.

“The response has been great,” said Llewellyn. “We didn’t have trouble getting people to come at all. That’s the wonderful thing; people want to be part of something. They know in France there’s a great love of literature.”

Llewellyn is careful to be attuned to local sensibilities. “When you turn up in another country you think you know what you’re doing and you learn very quickly you don’t…every city is culturally different and has its own flavor, successful festivals absorb the culture. We have some American partners and American institutions working with us but the partnership with the BnF and the Villa Gillet [in Lyon] is very important. Working with people is crucial to success. We can’t come in as a bunch of Americans riding like cowboys and telling people what to do.”

Now that Llewellyn can get back to work — “The holiday,” she said, laughing. “That was a shock. People told me, Paris is dead in August, but I had no idea it could possibly be like that,” — she is enthusiastic about the serious media partnerships the festival has attracted. Newspapers and magazines such as Le Monde, Le Point, and Les Inrockuptibles have signed on, as has the radio station France Culture.

“In NY [with PEN] it was much more difficult,” commented Llewellyn. “I came from Australia where we were everywhere, there was even an article about an author in the auto section of the Sydney Morning Herald. When I called the New York Times about PEN they told me they had done something on the festival the year before.”

Llewellyn’s way of working in Paris will be consistent with the attitude she developed when she began running the Sydney Writers’ Festival.

“My big thing is that literary festivals can seem intimidating. There is a certain flavor that is across the board with all the programming that I do that tries to be as inclusive as possible—you can’t assume everyone knows everything, because they don’t. It’s not a conference. To me festival means celebration, joy and fun, but that’s not to say that we’re not talking about serious topics. There are many one-on-one conversations because that’s where writers get to spread their wings and interact with audience.”

Making a festival appealing to a wide swathe of people is important to Llewellyn, she likes to “engage different audiences…to give it that atmosphere that there’s something for everyone.”

In Paris participants will be able to attend events including translation slams, coffee with French author Catherine Millet who will discuss crossovers and similarities in visual arts and literature, Irish novelist John Banville in conversation, Franco-Lebanese author Amin Maalouf on identity and conflict, or a session on the graphic novel with French authors Antonin Baudy and Nadja. Many events will be free, such as a session with Sri-Lankan born Canadian writer Michael Ondaatje on poetry in fiction or Franco-Greek writer Vassilis Alexakis on the mother tongue.

There will also be a parallel event prior to the festival with former child soldier, Ishmael Beal, who will speak to students from two Paris-area schools. Llewellyn has already organized events with Beal in the Bronx, where she said the students started off by slumping down in their chairs and by the end of the program they were sitting up and asking questions.

All events will be translated into French and English and writers will often do readings in their native language: “I’m keen for people to hear the language of each writer. Hearing their voices and in their own languages is incredibly beautiful,” said Llewellyn.

After Paris, some of the writers will travel to Lyon to participate in events. This is also a trademark of Llewellyn’s management style. When she was running the Sydney Writers’ Festival she thought, “these poor people are coming all this way. I worked with a festival in New Zealand and paired up with them and I took writers out to regional areas that were never serviced.”

While at PEN, Llewellyn took visiting authors to five cities across the US.

“I think we should share the love. Given more time we’ll do more with pairing.”

In the meantime Llewellyn is readying herself for the festival launch this weekend: “It’s one of the great literary cities of the world, there should be a festival here.”