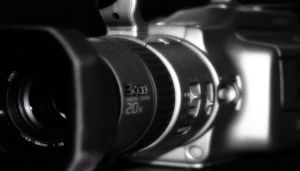 Yes, there is John Green, who along with his brother Hank, posts under the moniker the The Nerd Fighters, aka Vlogbrothers, who’ve collected 1.35 million followers and amassed some 350 million views — but few others in the book/publishing world have been able to garner anything close to the same level of attention. Of course, many of the videos have only limited relevance to books — among the most popular videos are “Giraffe Love and Other Questions Answered” (15 million views) and “51 Jokes in 4 Minutes (4.5 million views).

Type in “books” into the search bar and sort by “views” and the top result is a reading of Winnie the Pooh (15 million views), followed closely by the joke rap video by Julian Smith “I’m Reading a Book” and the a static video that plays  Alice Cooper’s “Schools Out.”

At least the instruction video on how to download Google Play ebooks has generated 3.5 million views…

In the past we’ve looked at several ways publishers have worked with video to try and promote their books, but the numbers are modest. Random House’s top video is an interview with Elmo. Even the videos for several bestsellers have achieved relatively modest numbers for the YouTube age: Christopher McDougal talking about Born to Run drew 250,000 views and Rebecca Skloot discussing The Immortal Life of Henrietta Lacks has been watched 150,000 times.

Last year, we wondered why there was no book equivalent of the Harlem Shake (remember that?). And in 2011, we put together a thorough look at the online video book marketing ecosystem: Surveying the Best and Worst in Book Trailers and In Search of the Ultimate Children’s and YA Book Trailer. Alas, the intervening years has seen limited advancement in the book trailer — and certainly little has approached the scale of the some of the young vloggers discussed in today’s feature story about London’s YouTube Summer in the City festival.

So tell us, what are publishers missing? What more can be done to leverage this wildly popular format? Is it is a simple as the fact that publishing lacks a sexy spokeswoman/man or two? Or is video simply a different format that is not especially suited to book content and draws an audience looking for something, let’s say, quick, ephemeral and fun?

And for the curious and interested, we too have a YouTube channel. Take a look and subscribe, as we plan some interesting and innovative videos in the coming months, particularly around the Frankfurt Book Fair.