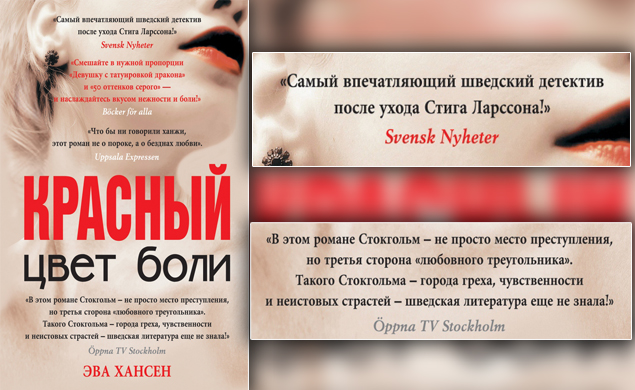 Take a look at the cover of Tsvet Boli Krasny, or “Red is the Color of Pain.” As reported by The New York Daily News, it’s a crime novel “purportedly” by a Swedish author promoted as an artful combination of Fifty Shades of Grey and, naturally, The Girl With the Dragon Tattoo.

The problem, though, is that the book’s author is not actually Swedish. And the critical rave reviews gracing its cover are credited to Swedish news organizations that don’t actually exist.

The Moscow News had reported on the fake blurbs: Svesk Nyheter (a.k.a. Swedish News) had praised the book as “The most impressive Swedish detective novel since Steig Larsson!” and Oppna TV Stockholm had praised the book’s portrait of Stockholm as one “that Swedish literature has never known before.”

And it turns out that the book’s purported author “Eva Hansen” is, in the words of the Daily News, “another bit of fiction that Swedish literature has never known.” The name is a pseudonym that Yauza, the imprint that of Russian publisher Eksmo, crafted along with the fake reviews. And as the News pointed out, “Any hope of proving that she was a real Swede is dashed by the fact that there’s no trace of translation from the original Swedish — even the book’s copyright is written in Russian.”

But with 20,000 copies in print, a huge number for a debut book by an unknown author in Russia, a publisher’s got to do what a publisher’s going to do. “Advertising is advertising,” Koshelev said. “A lot of books are printed with slogans claiming they had a certain rank on the New York Times Bestseller List, and no one checks whether it’s true.”

“It’s dependent on readers who don’t know too much about the country in question, and aren’t going to check,” [Marie] Pankevich [of the Russian publishing house Amfora] added.

One, however, decried its origins: “No author with the name of Eva Hansen exists in Sweden. The book is fake.”