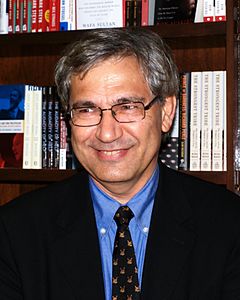 In a wide-ranging interview with The New Republic, Nobel Prize winning novelist (one is obligated to introduce as such, correct), Orhan Pamuk when asked by Pankaj Mishra if the economic success of countries like Turkey or India or China was going to “breathe new life into the novel,” had this to say:

“I think so. I strongly believe that. The novel is a middle-class art. And we see the proliferation of middle classes in India, China, definitely in Turkey, so everyone is writing novels. If you want to predict the future, I can predict that in Europe, in the West, the importance of literary novels will decrease, while in China, India, popular literature will continue. Innovation will come from there, because the populations are large, there will be a lot of production.”

I’m writing a novel now about immigration to Istanbul. Starting in the late ’50s, especially in the ’60s, immigration to Istanbul from the poorest parts of Turkey began. And then Turkish shantytowns were beginning to be built in the mid-’50s, but in the ’60s, they flourished. This is not a middle-class changing of cultures. This is the proletariat, the most dispossessed.

I have assistants right now doing research, talking to people, reporting to me. How did street vendors or yogurt sellers in the 1970s behave? That kind of small detail. When I was collecting material, I said to myself, My God, I’m doing what Stendhal did, what Balzac did. All the experience from after Stendhal, from after Balzac, from Jorge Luis Borges to Thomas Pynchon, from surrealistic things to James Joyce or William Faulkner or Gabriel García Márquez — I can benefit from their experience. But essentially, I’m doing what Stendhal did in The Red and the Black—a poor guy coming to town and striving — but in many different forms. Which proves that the art of the novel has immense continuity, because it has elasticity. It can use anthropology, it can use essays, New Journalism, blogs, the Internet. You can make novels out of everything. Journalists call and say, “Mr. Pamuk, the art of the novel is dying.” No, it’s not. It’s strong, everyone is writing them, everyone wants to read them. Maybe we’re not so interested in what is happening in London, but we’re interested in what’s happening in Zadie Smith’s new novel. I think the form has immense possibilities.

And as for America, Pamuk agreed with Mishra’s assertion that the TV serial, shows like “The Wire” or “Breaking Bad” is slowly replacing the novel:

“Replacing Dickens. They’re sophisticated. That really kills the novel — it takes away the regular pleasures of reading novels. The power of those sophisticated serials is that you can watch it with your wife, your friends, and you can immediately chat about it. It’s a great pleasure to enjoy a work of art and to be able to share it with someone you care about.”