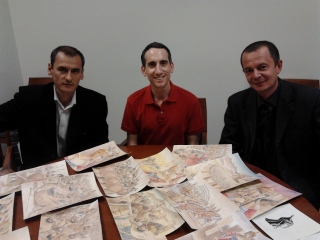 The late 1990s and early 2000s witnessed a brief period of flirtation and cooperation between the United States and Uzbekistan, the post-Soviet Central Asian state which has been run since independence by its strongman president Islam Karimov. But even before 9/11 and all that ensued in the aftermath, Karimov was looking westward. In his 1997 book Uzbekistan on the Threshold of the 21st Century he wrote a detailed report on the country as if he were the chief executive of a firm addressing both employees and potential investors. But when Uzbek government forces opened fire on protestors in the city of Andijan in 2005, reportedly killing hundreds of people, the US-UZ romance cooled, and things have never been the same since.

Still, the State Department persists in its efforts at promoting American cultural values in the country; next year Washington will dispatch a crack squad of contemporary dancers to Uzbekistan and other countries in the region in the name of “cultural diplomacy.” This month meanwhile the US Embassy in Tashkent published an interesting book that most people reading this article will, unfortunately, almost certainly never see.

Two Legends of Uzbekistan is a unique collaboration between an American graphic novelist and two Uzbek artists. The American, Paul Benjamin is a comic book writer whose credits include Hulk and Spider-Man, as well as his own mythology-themed book Pantheon High. He has also written multiple licensed properties such as Monsters, Inc, Star Trek, Muppets and World of Warcraft while his graphic novel World of Warcraft: Shaman was a New York Times bestseller. Two Legends’ artists are Husan Sodiqov and Shavkat Muzaffar, Soviet-trained illustrators who are both members of the Uzbekistan Academy of Arts and both winners of the prestigious national “Oltin Qalam” (The Golden Pen) contest. How did this unusual collaboration come to pass? Benjamin arrived in Uzbekistan 2011 with his wife, who had joined the state department as a Foreign Service Officer and had been appointed Press Attaché in Tashkent. He promptly started scouring the capital for graphic novels, but says:

“There isn’t really a comic book or graphic novel tradition in Uzbekistan. I spent a lot of time searching the capital city of Tashkent in a mad quest for Russian comics while I was studying the language. After many weeks of sleuthing, I finally found a store with a single, narrow bookcase full of Russian translations of Japanese manga and American graphic novels, including one of my StarCraft books co-written with Dave Shramek.”

But that was it. Still, his own work came to the attention of Aazam Abidov, an official in the embassy’s Public Affairs Section. Abidov proposed a meeting between Benjamin and a group of local artists who had recently traveled to the US on an embassy grant and who had visited a comic book museum. After the very first meeting Benjamin and the artists decided to collaborate. Since they shared a common interest in mythology, the newly formed creative team decided to “focus our storytelling efforts on that part of Uzbek culture… Eventually, I identified a half dozen or so tales that had potential then wrote up a few paragraphs on each one. Aazam translated those and sent them to the artists who picked two.”

The lack of an indigenous comics tradition proved an insurmountable obstacle to any hopes Benjamin might have had of producing a graphic novel, however: “Two Legends of Uzbekistan is more of a picture book, full of gorgeous illustrations accompanying my text. The artists and I specifically went that route because of the general lack of sequential storytelling in Uzbekistan.” Still, Benjamin is not disappointed: “the resulting book is beautiful,” he says.

It is indeed a handsome publication. At the book’s official presentation ceremony August 6 at the embassy in Tashkent, Chargé d’affaires Philip Kosnett said: “Uzbekistan has a deep and rich cultural history and it is our hope to deepen the appreciation for the cultures of our two countries and further cooperation in this area between Uzbekistan and the United States,”

Indeed; and yet for a project backed by the US State Department Two Legends of Uzbekistan is ironically similar to the type of illustrated folktale book that was a mainstay of Soviet publishing. For decades, the USSR heavily promoted folk tales as a safe form of “national” culture, recruiting prominent artists to illustrate editions of stories taken from the many ethnic groups that lived in the USSR. These books were not only promoted within the USSR but were also at times translated into English, French, German and other languages- all in the name of promoting Soviet culture, just as today the US state department uses the same (or similar) material to promote cross-cultural collaboration. Even today it is not difficult to find these old Soviet folktale books, and not only in the former USSR. Recently I stumbled upon a Moscow-published English edition of Kazakh folktales in a bookshop in Texas.

Adding to the eerie retro Soviet feel, the US Embassy even uses the obsolete Cyrillic Uzbek alphabet for its Uzbek translation of Benjamin’s text (the book’s two stories appear in English, Russian and Uzbek). This alphabet was developed during the Stalin era and rejected in favor of a Latin alphabet in the early years of independence. Although the Stalin variant has not yet been fully abandoned, its use in the book was surprising to me, and Benjamin himself is uncertain as to why the more up to date Latin script was not used: “I’m not certain why the Uzbek was printed in Cyrillic. In Tashkent, Uzbek is often written in Roman characters but it is sometimes presented in Cyrillic as well. I have to admit that I have no insight into why it is sometimes done one way or the other,” he says.

Still, Benjamin is delighted with the result, and it is indeed a worthwhile book, which will be a fascinating read for anyone interested in learning at least a little about a culture that emerged from a collision between a (primarily) Islamic Turkic society where the intellectuals wrote in Persian and the radical atheistic materialism of the USSR. The first story is particularly striking: a tale of amazons protecting the ancient city of Samarkand from invaders, it confounds clichéd expectations as to what to expect from a Muslim culture. Benjamin’s background in comics drew him to the story:

“The tale of Amazons appealed to me because I’m a big fan of stories with strong female characters. I enjoyed tales of the Greek Amazons as a kid and of Wonder Woman as I got into super heroes. Kitty Pryde, aka Shadowcat, of the X-Men is my all-time favorite super hero. I enjoy writing women with strength of spirit as well as physical power because I’ve known so many women like that in my life.”

Benjamin admits he did not expect to discover a proto-feminist fable lurking in Uzbek mythology: “I was a bit surprised to find an Amazon legend in a society that remains largely patriarchal, but I wasn’t too shocked. After all, I met and worked with a lot of strong, capable, impressive women during my time in Uzbekistan.”

The second story is about a weaver who rescues his beloved daughter from forced marriage to a king by creating something even more beautiful in exchange — a spectacular piece of silk. Benjamin explains: “Crafting beautiful silk is a huge part of Uzbekistan’s character and an important export industry, so I knew that story would not only touch the local population but would also reach out to Westerners whose silk products to remind themselves of their visit to Uzbekistan.”

Working with the artists was a “dream,” says Benjamin while the production of the book went smoothly, aided by a grant that covered the artists’ fees and all printing costs. Indeed, he says, producing a book for the mighty US state department in the name of deepening Uzbek-US cultural understanding was a lot like working on a self-published comic:

“From what I saw, the process wasn’t that different from publishing a small print run, independent book in America. The artists and I did our work, then folks from the embassy found a local printer to print and bind the volumes….In a sense, it’s much the same as if I produced an independent book in the US then paid to print it so that I could sell it at conventions.”

Sadly, Two Legends of Uzbekistan will have a very limited circulation indeed. In fact anyone interested in reading it will have to get on flight to Tashkent and find some significant official business to attend to at the US Embassy. This is a pity. Says Benjamin: “It’s not expected to have broad distribution. Instead of heading to bookstores, it will be given as a gift to embassy visitors as a symbol of creative cooperation between people from America and Uzbekistan.”

Is it then a sinister plot on the part of the US government to undermine Uzbek sovereignty? Benjamin laughs: “If it is, then it’s a far subtler plot than even the nefarious Doctor Doom could concoct.”