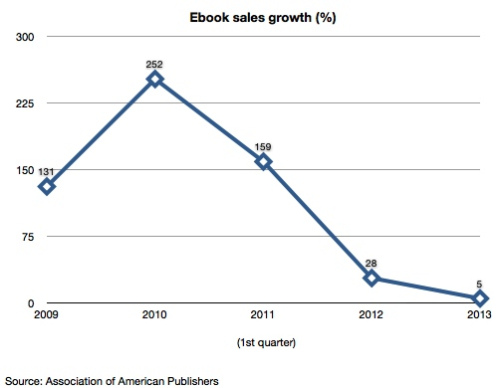 At roughtype.com, Nicholas Carr continued his examination of the decline in ebook sales growth, a trend that started in 2012 and seems to be continuing this year. According to an Association of American Publishers report, e-book sales in the U.S. trade market for the first quarter of 2013 grew by just 5% over the same period in 2012. Meaning, according to Carr, “the explosive growth of the last few years has basically petered out, according to the APP numbers.”

Carr points out that while ebooks are still taking still taking share from printed books (sales of which fell by 4.7% in the quarter), “the anemic growth of the electronic market calls into question the strength of the so-called ‘digital revolution’ in the book business.”

And another report from Nielsen shows that worldwide ebook sales in fact declined in the first quarter of this year from last year’s levels – something that Carr says “would have seemed inconceivable a couple of years ago.”

The report states that:

“Nielsen’s data for the UK market mirrors recent statistics published by the Association of American Publishers in early July. This reported that the days of double or even triple digit growth for the market might now be gone, with ebook sales growing by only 5% to $393.6 million in the first quarter of 2013. It also suggested that the huge success of The Hunger Games in 2012 may have been a one-off event that helped to skew expectations of the market this year.”

As ebook sales look set to take just under half of the total fiction market in the UK and more than a fifth (22%) of the overall UK book market, according to recent Bowker Market Research, it is only natural that the rate of growth would slow. As the overall market for ebooks gets bigger, publishers will need to sell ever greater volumes of ebooks in order to report significant growth, which is harder to achieve in a larger market.

In a post from January of this year, Carr speculated on a few of the reasons that ebooks might actually fall short of expectations:

1. While e-books are suited to some kinds of books (such as genre fiction) they’re not as well suited to other kinds (such as nonfiction and literary fiction); and while they’re perfect for some reading situations such as plane trips, they’re less well suited to everyday situations like lying on the couch at home. “The ebook may turn out to be more a complement to the printed book, as audiobooks have been, rather than an outright substitute.

2. Early adopters were enthusiastic adopters, further converts might be harder to come by.

3. Early buyers of e-readers immediately filled them up with more books than they needed. (For which I’m guilty as charged).

4. The shift from e-readers to tablets is having a seriously negative impact on ebook sales. (As Carr observes, “On an e-reader, the e-reading app is always running. On a tablet, it isn’t.)

5. Ebook prices haven’t dropped as much as many anticipated — there’s just not that big a price difference between an ebook and a paperback.

Carr concluded by saying, “Those still seem reasonable. Most intriguing, to me, is the possible link between the decline in dedicated e-readers (as multitasking tablets take over) and the softening of ebook sales. Are tablets less conducive to book buying and reading than e-readers were?”