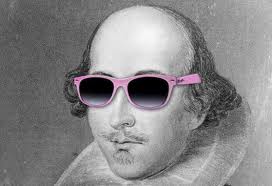 Poor Shakespeare, who is apparently too “inaccessible” to the modern American college student.

According to the lead author of a report from the National Association of Scholars (NAS) entitled “Beach Books: What Do Colleges and Universities Want Students to Read Outside Class?,” “US colleges increasingly view anything published before 1990 as ‘inaccessible’ for students.”

Writing about the report in The Guardian, Ashley Thorne notes:

“One summer when I was an undergrad, my college assigned “The Pilgrim’s Progress” to all the students. It was, so to speak, a mandatory beach book, not for credit in any course, but meant to be the basis for a campus-wide discussion on the theme of “difficulty”. Reading Bunyan’s 1678 allegory of Christian’s hike to the Celestial City was indeed an uphill challenge for us. That college assignment comes to mind as I’ve recently been looking at trends in similar summer assignments for college students.
Before they arrive on campus this fall, many American college freshmen will already have finished their first assignment. Their colleges have given them a “common reading”, one book that they are all expected to read. Last year, 309 colleges made such assignments. It’s a great tradition, but something curious has happened since my days as a college student. Only eight schools assigned anything published before 1990, and only four assigned books that could by any stretch be considered classics.
For American college students, 1990 appears to be a historical cliff beyond which it is rumored some books were once written, though no one is quite sure what.”

The eight pre-1990 books that were assigned and the colleges that assigned them?

As the report’s summary states:

So the question for Thorne then is this: “Why have US colleges decided that the best way to introduce their students to higher learning is through comic books, lite lit, and memoirs?” (Of course, many, many people will object to that characterization of aforementioned titles — as well as the term “beach read” — as being overly patronizing, including ourselves here at Publishing Perspectives.)

And part of her answer is this: “The faculty and administrators who devise these programs seem to think that unless the living author can stroll into the classroom and explain what she had for breakfast this morning, the students will be unable to “relate” to her written words.”

Thorne believes that the choice of book comes down to the ability of the author to visit and speak at the campus (usually for a high fee), trendy topics, as well as “the idea that students are ready for only the most tender shoots. Defenders of the choices say they want ‘accessibility’ and ‘relevance.’ Mark Twain, Charles Dickens, and even Zora Neale Hurston just don’t make the cut when it comes to relevant social issues. In response to critics, some of the colleges say that the books they pick are likely to be the “classics of the future”, but the turnover among the choices from year to year suggests either that we are due for an unprecedented avalanche of new classics or that most of these hunches are off the mark.”

As the authors of the study lament:

“Reading for pleasure continues to decline among young people and college graduates, and it is possible that one reason for this is that colleges are failing to instill in students a love of books. As the study To Read or Not to Read (PDF) [shows], there is a correlation between lack of reading and diminished likelihood for career success, physical activity, and civic participation.

Not only to college students lack shared intellectual experiences with each other, now Americans as a whole lack shared intellectual experiences, ‘These collective moments that we used to have, that Americans did as a culture – nowadays, those things don’t exist,’ said Don Troop, who for seven years published ‘What They’re Reading on College Campuses,’ a column in the Chronicle of Higher Education.

Common reading programs are a thin and fraying thread to a collegiate past in which students in the ordinary course of their education, both in high school and in college, absorbed a substantial body of shared texts. Faculty members a few generations ago could assume without a moment’s doubt that every freshman would have easy familiarity with Julius Caesar, Leaves of Grass, Moby-Dick, The Odyssey, the Declaration of Independence, Genesis, and many others once considered essential. That level of common literary and intellectual experience is gone. Some students today reach college having read such books, but many have not. The baseline of common intellectual experience has been erased and colleges have to cope with the results. The advent of the Common Core State Standards in K-12 education may create a new baseline, but those standards emphasize ‘informational texts’ and have a limited place for literature. If a new baseline emerges, it will still leave college students with a thin level of common intellectual and especially humanistic experience.”