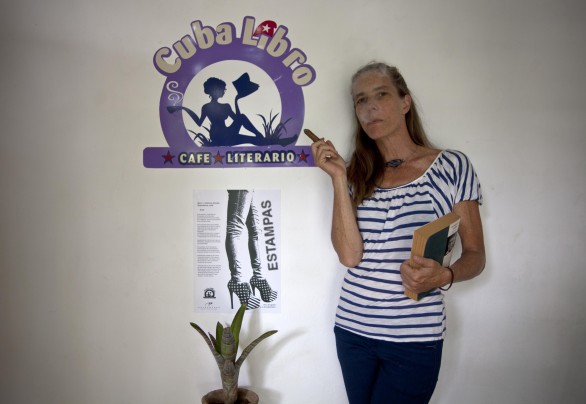 The Associated Press reports that “Cuba’s first English-language bookstore offers a selection that would just about stock the lobby of an average Vermont bed and breakfast. Next to what’s available in English elsewhere in Havana, it might as well be the Library of Congress.”

Started by former New York City resident and longtime expat Conner Gorry, Cuba Libro opened Friday as a combination bookstore, café, and literary salon that hopes to give locals as well as tourists a space in which to purchase (or borrow) books in English.

“I know how hard it is to get English-language sources here,” Gorry, a journalist living in Cuba since 2002 told the AP, “So I started cooking the idea.”

The idea was born two years ago, when a friend gave Gorry a bag of 35 books she didn’t know what do with. More donations followed, bringing the collection to the more than 300 volumes that were available on opening day.

Before Cuba Libro books available in English at government run stores included the rare Cuban novel in translation, government newspapers, and a few magazines for tourists. Beyond that, the AP reported, “it’s mostly works like the translated writings of Fidel Castro and Ernesto “Che” Guevara, and pro-government literature denouncing the United States.

There were of course exceptions: one state bookstore surveyed by the AP offered a few well-used titles, including Diving Physiology in Plain English, published by the Undersea Hyperbaric Medical Society, and a “rare” first-edition copy of Woe Unto You, Lawyers! a 1939 critique of the legal profession that seems to have once been owned by the Columbia University Law Library.

And while Gorry made clear that Cuba Libro was not “in the business of offering anything that could be considered ‘counterrevolutionary,’” the store does offer books and views not regularly available in a country where the government still controls nearly all forms of media.

For example, the shop has Mexican journalist Alma Guillermoprieto’s clear-eyed view of her time in Cuba as a ballet instructor in the 1970s, Dancing with Cuba, as well as a 2010 edition of Revista, the Harvard Review of Latin America, dedicated to Cuban ally Venezeula, which includes an essay by critic Teodoro Petkoff which called the government of Hugo Chavez “an authoritarian, autocratic and militaristic regime.”

And, the AP reports, Carlo Menendez, a 77-year-old former economist, was delighted to find a copy of Freefall by Nobel Prize winning economist Joseph E. Steiglitz. “I hope (the store) flourishes,” he said, adding “It is increasing in Cuba, the possibility to have different alternatives.”

Menendez was talking about recent economic and social reforms put into place by President Raul Castro, which have made it possible for hundreds of thousand of Cubans to legally open (or work for) private small businesses.

But ironically, it is possible that the U.S. embargo barring U.S. citizens from financial transactions with the Cuban government might causes as many headaches for Gorry as do Cuban regulations, although she says she takes great pains not to “run afoul” of laws back in the states.

“I’ve had to tread extremely carefully, everything above-board and legal, because I’m an American, I’m a North American, I am beholden to U.S. laws,” she told the AP. “And so I’m not in agreement with those laws, but I abide by them.”

Gorry has additional plans for the store, including English classes, and a lending library for those who can’t afford to purchase books on their own.

And at the same time, employees are asking diplomats and other foreigners to help add to the store’s stock.

“Getting donations is going to be an interesting part of it, because importing books here is very difficult,” Gorry said.