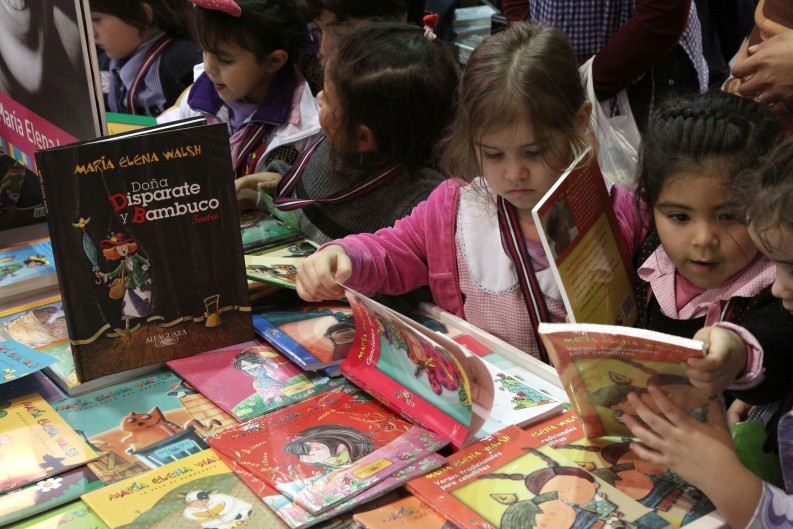 Children at the BA Children’s and Youth Book Fair

BUENOS AIRES: “Argentina has a unique capital of children’s authors in [Latin America],” says Laura Leibiker, Editorial Director of Children’s Literature for Argentina and Chile at the Norma/Kapelusz publishing house. “Three generations of well positioned writers and illustrators coexist today: those who began working before the beginning of most recent dictatorship, those who started with the return of democracy, and the recent ones.We have a real tradition.”

Increasingly, children’s literature from Argentina is gaining more and more worldwide attention. In 2008, Argentina served as Guest of Honor at the Bologna Children’s Book Fair, and for the occasion, the Illustrator’s Forum of Argentina organized the exhibition “When cows fly,” reinforcing the opportunities for national artists to collaborate with foreign publishers. The Argentine illustrator Dolores Avendaño, responsible for the cover art for the Spanish-language editions of  Harry Potter. In 2012, María Teresa Andruetto became Argentina’s first writer to win the Hans Christian Andersen Award, considered the Nobel Prize of Children’s books; and last May, illustrator Isol Misenta won the Astrid Lindgren Memorial Award, the world’s largest children’s and youth literature prize.

At home, the children’s publishing segment continues to grow and represents some 22% of the total market. According to PROMAGE, production is concentrated in thirty specialized publishing houses representing 60% of the children’s book market. Much like elsewhere in Latin America, sales remain heavily dependent on government book purchases, with both the National Government and the Government of the City of Buenos Aires, among the heaviest customers. Last year alone, they purchased nearly one million volumes for schools and reading programs. Sales are generally concentrated in backlist titles, which represent 85% of the overall market for children’s titles. If the recent Children’s and Youth Book Fair in Buenos Aires — which featured two Professional Days for publishers and booksellers on the 15th and 16th of July — was any proof, innovations are coming to the sector as well. Whether it’s promoting children’s classics on Twitter or leveraging new digital platforms to enhance illustrated books, publishers are embracing digital technology.

That said, it remains a challenge. Daniel Benchimol, director of Project 451, hosted the digital books conference and raised several provocative questions: Is “the future” really that close? How is the transition from paper format to a digital one managed? Are the skills of a traditional publisher sufficient to address an electronic edition?

And when it comes to bookselling, Buenos Aires is blessed and has one of the highest density of stores-per-capita anywhere in the world. Mariela Nagle, owner of German bookstore Mundo Azul, and Walter Binder, editor of Calibroscopio and owner of Buenos Aires’ based Libro de Arena, reminded the audience that commerce must be local and bookstores are an indispensable part of their neighborhoods, with serving the customers who walk through the door every day who bring life and purpose to their shops, the top priority.

That said, it doesn’t mean one can’t learn from foreign trends. Italian educator Grazia Gotti, founder of the Cultural Cooperative Giannino Stoppani and its bookstore, along with Sophie Hofnung, editor of French publishing house L’Ecole des loisirs, and German translator Silke Kleemann, shared their views of  the state of children’s publishing and bookselling in their respective countries, and reflected on the involvement of national states in the promotion of literature and school’s reading goals. Crowds were heavy at the BA children’s fair.

And one of the most exciting additions to this year’s fair was the “Magic in Bookstores,” competition, organized by Fundación El Libro, which honored the top bookshops’ initiatives to promote literature and reading across the country. Five finalists were chosen, with “Atrapasueños” (Dreamcatcher) — a two-year long project that has brought a renewed vigor and focus to reading in the Buenos Aires’ neighborhood of Saavedra, through storytelling sessions, creative writing workshops and activities that involve new and small publishers just beginning in publishing children’s literature — coming out the winner.

In all, a total of 161 publishers publishers, editors, booksellers, designers, press staff and students gathered to discuss a single common goal: fostering the next generation of new readers. And with this year’s participation up by nearly 60%, it merely underscores the growing professionalization of the sector.

However, one persistent problem remains: the lack of professional management for right sales. “There are no experienced Argentine agents dedicated exclusively to children’s books,” said Antonio Santa Ana, a children’s book author and former book editor.

If one theme emerged from the Professional Days of the Fair, it was this: “Books have to defend themselves from increasing sources of entertainment and stimulus,” said Leibiker from Norma/Kapelusz. “The more competition there is, the more competitive we need to be. Sales need to be increased, not for the sake of economics but to keep helping children develop into readers, which will guarantee they will be readers as adults.”