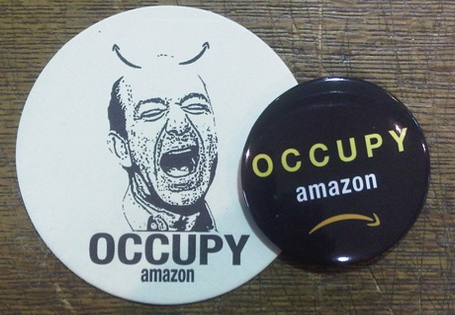 The Occupy Movement provided one of the more memorable anti-Amazon memes in recent memory. Can the ABA generate another?

American Booksellers Association CEO Owen Teicher issued a letter to members yesterday, calling on them to publicize Amazon’s business practices; making clear that retailers’ experiences differ greatly from the image that most Americans have of the retail giant.

As I am sure you have noted, the usual summertime lull in book industry news seems to have totally evaporated this year. We’ve seen a bad decision in federal court on ebook pricing; the world’s best-known author revealed as having adopted a pseudonym; President Obama using an Amazon distribution facility as an ill-advised backdrop for a speech on job creation; and, just this past Monday, the story breaking about Amazon founder Jeff Bezos’ purchase of the Washington Post for $250 million.

As the ABA Board and I wrote last week in a letter to the president, attempting to cast Amazon as a champion of local economies and a net jobs creator ignores the facts. Amazon is anything but a job creator. Studies by the Institute for Local Self-Reliance and others have shown that Amazon’s practices are detrimental to the nation’s economy. Indeed, macro analysis shows that for 2012 alone — using Amazon’s own numbers and its increase in sales — Amazon cost the U.S. economy more than 42,000 jobs.

It was encouraging to note that [the] ABA’s criticism of the president’s speech was included in some of the news coverage of the event. But we should be honest with ourselves: Amazon has established a strong relationship with many consumers, coming in second in a top 10 ranking of national brands, according to BrandIndex. In addition, Amazon is rated number one by parents with children under the age of 18, young people aged 18-34, and consumers who identify themselves as members of the Democratic party. (Try to figure that one out!) And, notably, the Kindle occupied the ninth spot in the BrandIndex top 10.

You and your bookselling colleagues know the real narrative of the Amazon story, but it’s important that we keep in mind the viewpoint and experience of our customers. Amazon’s public message of low prices and wide selection are, regrettably, the only story that many consumers know.

Luckily, Amazon does not operate in a vacuum, and there is a growing record of their questionable business practices, thanks to, among others, the work of Stacy Mitchell, organizations such as AMIBA, and such news organizations as the Seattle Times, Fortune magazine, and the Financial Times, not to mention industry voices such as novelist and bookseller Ann Patchett and Melville House publisher Dennis Johnson.

But I believe that the most influential and trusted voice in helping to tell the true story to your customers is you. Armed with the facts – and those facts are extraordinarily persuasive – your outreach to your customers is critically important. With that in mind, I wanted this month to share some important resources of information and analysis.”

“All the materials linked…make clear that Amazon’s narrative of growth, value, and productive contribution to communities is highly distorted. These resources suggest that the real story is a combination of complex strategic machinations, brass-knuckles capitalism, and a myopic disregard for the consequences for any stakeholders save itself. As the company concentrates its power and influence in a nexus of commerce, government, and media, Amazon’s actions should drawn even more scrutiny. I believe it is our job to help encourage and promote that increased scrutiny.

These, I know, are strong words, and may sound self-serving. But as John Adams wrote, “facts are stubborn things,” and the sources…will arm you with plenty of facts, which tell the real story.

I know that every store needs to determine for itself what it chooses to say about Amazon. What may work in one part of the country may not work in another, and your judgment and instinct about your community is, inevitably, the best.

As your trade association, while we think it’s appropriate to provide you with these resources, we also continue to believe that their ultimate utility is in framing the best story you have to tell — which is about the remarkable and invaluable contributions to your community that indie bookstores make every day.”