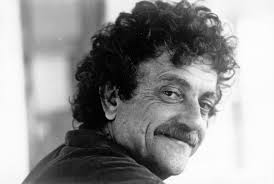 Kurt Vonnegut fiction is classic. Should it be sacrosanct?

“Since the launch of Kindle Worlds a month ago, we’ve published over 120 stories and the customer response has been overwhelmingly positive,’ said Phillip Patrick, Director, Business Development and Publisher of Kindle Worlds. “To include the work of an American literary icon in Kindle Worlds is a thrill for us and a golden opportunity for Vonnegut fans everywhere.”

Donald C. Farber, trustee of the Kurt Vonnegut Trust added, “We have been very pleased with the success of the Kurt Vonnegut backlist on Kindle. With Kindle Worlds we have an opportunity to further his reach with today’s readers. This is a natural extension of the legacy and a testament to the enduring popularity of his characters and stories. Billy Pilgrim, unstuck in time, is going to quickly become a Kindle Worlds favorite.”

Perhaps. But as Matthew Kahn noted at Kahn’s Corner, it seems exceedingly unlikely that Vonnegut himself would have been eligible under Amazon’s rule to write Vonnegut fan fiction:

“In case you were wondering, here are the rules for the Vonnegut fan fiction project. Pretty much anything the man ever wrote would be prohibited under these rules.

One rule is: ‘We don’t accept offensive content, including but not limited to racial slurs, excessively graphic or violent material, or excessive use of foul language.’

This is a man who has a story called “The Big Space Fuck.” Breakfast of Champions has a drawing of an asshole on page five. From God Bless you, Mr. Rosewater: ‘Now Eliot came out of the lavatory, all naked and hairy, drying himself with a tea towel…Eliot now began to play unconsciously with his pubic hair. It was nothing extravagant. He would simply uncoil a tight spring of it, let it snap back into place.’

Vonnegut’s books have been burned because people have found the content offensive! His novels frequently end with the protagonist committing suicide! He routinely draws assholes in his books! And what counts as offensive content? He writes about World War 2. One of his novel’s main characters is a Nazi propagandist. Try that without risking offending anybody.”

And at io9.com, Rob Bricken piles on:

But Kurt Vonnegut? F*CK AND NO. The man is one of America’s literary icons. To allow fan fiction based on his work is a disgrace to it, because while someone might write a Vampire Diaries story as good as the original Vampire Diaries author, there is no goddamned way anyone is going to write a story starring Kurt Vonnegut’s characters as well as Vonnegut did.

This is just as insane as if the works of William Faulkner, Ernest Hemingway, F. Scott Fitzgerald, Harper Lee or J.D. Salinger were added to the Kindle Worlds program — and just in case Amazon somehow thinks that’s a good idea, IT’S NOT. DON’T DO IT.

Amazon, you can add so much else to your program without tarnishing the works of one of America’s greatest authors — or without tarnishing the works of any great author. You have so many perfectly acceptable candidates to choose from that there’s no way you’ll suffer without letting somebody write about Billy Pilgrim turning out to be Gossip Girl, okay?

Here’s a tip: if you sell it in your “Classic Literature and Fiction” section, maybe people shouldn’t be able to write legal fan fic of it, all right?

The submission platform for works under this license is expected to open this month.