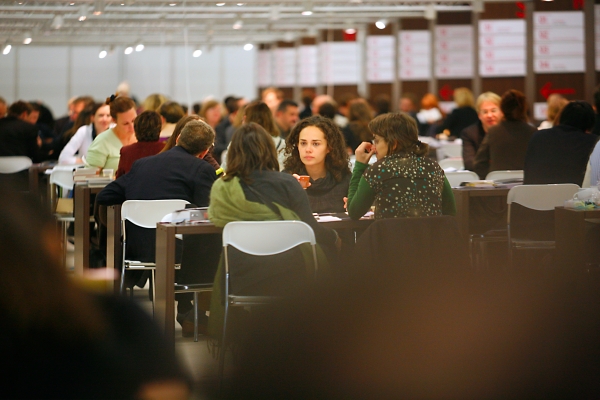 This year’s Frankfurt Book Fair will feature a revamped Literary Agents and Scouts Center (a.k.a. the LitAg), complete with new partitions, seating for guests, lockers, and best of all, electrical outlets at your feet (not hanging over your head) — promising a more user-friendly and quiet environment for the 600+ professionals from 30 different countries signed up for the center this year.

In addition to the usual large contingent of agents and scouts from the US, UK, Germany, and France, the LitAg will host agents from Greece, India, Ireland, Serbia, Taiwan, Turkey, Hungary, and Japan. “We’re particularly impressed with the large number coming from Spain,” says Riky Stock, LitAg organizer for the Frankfurt Book Fair.

As this is the 35th anniversary year of the LitAg, to mark the occasion, the Frankfurt Book Fair is soliciting photos from long-time participants. “So many people have been coming to the LitAg for 15 years, 25 years, and we’d like people to send in photos of themselves then and now. The photos will be displayed at the Fair as part of the Anniversary celebrations. There will also be the opportunity to have your photos taken to celebrate your attendance at the 35th Anniversary celebrations.

The Lennart Sane Agency came to Frankfurt before the LitAg was born. “Our agency has been going to Frankfurt every year since 1969, and I imagine we will always continue to do so. Frankfurt is not only the world’s largest book fair but also the most important, especially in terms of selling rights. Although a lot of deals now take place before or after the fair, it’s still the hub of the global publishing market. It’s that one time of the year when you get a chance to meet publishers and editors face-to-face, and to catch up with clients and colleagues,” said Philip Sane, Director of The Lennart Sane Agency.