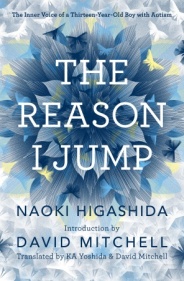 The Associated Press reports that David Mitchell’s latest book project, which was released in England this summer to excellent reviews and strong sales, and will be released in the U.S. next month, it is not actually written by Mitchell himself. He and his wife were the book’s translators.

The Reason I Jump, a memoir about autism, is a Japanese publication by Naoki Higashida, a twenty-one year old author and motivational speaker who was 13 when she completed the book. For Mitchell and his wife K.A. Yoshida, themselves the parents of an autistic child, the project was deeply personal.

“My wife had been hearing about the book and when she got a copy of it, in Japanese, she found it quite revelatory,” Mitchell said in an interview. “She started off interpreting the passages she felt were most useful in the book, but in the end she was reading through the whole thing.”

Mitchell acknowledges that he and his wife initially wanted to just translate the book for their own son’s caretakers. But as so often happens, “one thing led to another,” along with the realization that his publisher, Random House, was interested in any book with his name on it, regardless of his role. (Mitchell also wrote an introduction to the book.)

In the AP article, Hillel Italie notes that Mitchell and Yoshida took turns editing drafts of the book, with Mitchell relying on his “high intermediate” level of Japanese, a dictionary, and his iPhone for research. The husband and wife team took their time on the book since Mitchell was at the same time working on a novel of his own, so what a full-time translator might have finished in weeks took Mitchell and Yoshida around 18 months.

Italie also observed that while the list of poets who have translated books is long, there have been very few prose writers who also translate: Saul Bellow helped to introduce English-language readers to Isaac Bashevis Singer with his translation of Singer’s classic short story “Gimpel the Fool,” Vladimir Nabokov somewhat controversially translated Pushkin’s Eugene Onegin, and short-story writer Lydia Davis, who recently won the Man Booker International Prize, has also won acclaim for her translations of Proust and Flaubert.

“I think the main obstacle must purely be length,” Adam Thirwell, the British author whose book The Delighted States, looks at the history of novels, novelists and translations. “A translation is a very difficult object to create: For a novelist to translate someone else’s novel therefore requires a certain selflessness – a sacrifice for your own writing time to someone else.”

And indeed Mitchell admitted that, “The translation did distract me and take hours away from my novel, but in the long run it will pay dividends. I think it will feed into my own writing in some ways I haven’t realized yet and in other ways I’m already aware of.”