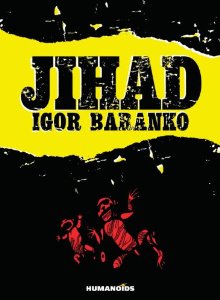 When I moved to Russia in 1997 I hoped to discover a secret world of excellent comics. As a teen in the mid-80s I was there when the whole “comics aren’t just for kids anymore” brouhaha kicked off, and was also aware of the many different styles of British comics, Japanese comics and French comics. Having been sealed off from the rest of the world for decades, surely the ex-USSR had something strange and good to offer for connoisseurs of words and pictures?

Alas no: while Soviet culture did have a rich tradition of illustrated children’s fiction, comics were viewed as trash and did not exist. Indeed, the first “Soviet” graphic novel I ever read was Nikolai Maslov’s Siberia, published by Soft Skull Press in 2006, the year after I left Russia. It is a quite extraordinary work and there is an equally extraordinary story behind it — its author, a night watchman in Moscow tracked down a French publisher in Moscow and showed him pages of a pictorial autobiography he had rendered in soft pencils. Impressed, the publisher brought it out in France; then it appeared in the US — but not Russia. Jihad, a graphic novel by the Ukrainian Igor Baranko has a similar story. Baranko approached Humanoids/ Les Humanoïdes Associés publisher Fabrice Giger — best known for publishing the BD titan Moebius in France — in Los Angeles in the early 2000s, pressing samples of his work into Giger’s hands. Baranko had served in Red Army, and then lived among Buddhists in Russia’s Far East before winning the Green Card lottery and moving to the US in the ’90s. Unhappy in America, he was on the verge of returning to Ukraine, but first seized his moment to show his cartooning to a European publisher.

Giger was impressed and soon commissioned a full-length work from Baranko. Published in English in 2004 as The Horde it sank without trace, but Giger remained convinced of the work’s quality and it is now back in print in a handsome hardcover format- and it really is a remarkable work of art.

If the title Jihad suggests the book is about Middle Eastern politics and religion, this is actually far from the truth. Rather the story begins in the year 2040, with a naked, shaven-headed woman meditating in an apartment in a dilapidated and seemingly abandoned city in the Buddhist Russian republic of Tuva. Baranko depicts this post-Soviet landscape with great attention to detail- he is not only obviously familiar with Russia’s indigenous Buddhist traditions, but also knows the way buildings are placed in relation to each other, the style of balconies, even the look of the plug sockets. Thus Jihad is immediately established as taking place in a spiritual/physical landscape we almost never see reflected in a work of fiction, whether it be in comics, film or literature. And from this point on Baranko weaves a very strange story indeed that draws upon a wide and eclectic range of sources. As Jihad is published by Humanoids, Baranko incorporates the kind of trippy sci-fi themes, sex and violence that have been a hallmark of the publisher since the days of Metal Hurlant in the 1970s. But in addition, he takes multiple aspects of post-Soviet reality and pushes them to grotesque extremes.

Thus one of the central characters is a lone Chechen roaming across Russia in pursuit of the “Heavenly Chechnya”; he has to since all of the Chechens were annihilated in a nuclear strike ten years before the book opens. Liberated of all fear of death following a stint fasting and praying among the mountain dervishes, he walks towards a hail of bullets while reflecting on death and destiny. It’s another sign of Baranko’s awareness of Russia’s different religious and mystical traditions, but also, as with the Tuvan landscape- highly physical. His Chechen may have a mystical streak, but Baranko’s eye for detail is very strong- he knows what the people of the Caucasus look like, the landscape they inhabit. Nor is the idea that the Chechen people might disappear particularly exotic; it has already happened insofar as Stalin had the entire populace deported to Siberia and Kazakhstan in the 1940s.

Baranko also shares a lot of obsessions with contemporary post- Soviet authors. Like Vladimir Sorokin he is fond of clones, and Baranko releases replicas of Newton and Abraham Lincoln into his narrative. Viktor Pelevin has played with themes of reincarnation and Buddhism.  Meanwhile Baranko’s future dictator, failed SF writer Ivan Apelsinov (“Ivan Orange”) is a clear parody of Russian author turned ultranationalist politician Edward Limonov (“Edward Lemon”), who liked to ramble on about “Scythians” and war and Gulags until he turned semi-respectable during the Putin era. Clearly the possibility that a future authoritarian leader might blend elements of the communist past with nationalism and Orthodoxy in an unsavory postmodern blend was evident to a Ukrainian exile living in the USA years before Vladimir Sorokin observed Vladimir Putin doing it in real time in Russia, thus inspiring his own satire Day of the Oprichnik.

Jihad is unlike anything else published in BD or American comics. Baranko is fluent in post-Soviet chaos, and blends religion, silver age poetry, Chernobyl, telekinesis, the quasi religious worship of Lenin and Russia’s history in a manner at once effortless and yet also feverish.  If reminiscent of anything, this anarchic-mystical blend recalls the comics work of famed film director Alejandro Jodorowsky, but Baranklo has his own concerns and approach. Jihad in this context refers to “struggle”- something Baranko the displaced ex-Red Army Ukrainian expat and his rich cast of characters evidently know all about- although a quick check of credits on French Amazon reveals that the artist has since established himself as a presence on the French scene, working with major writers and even taking over art duties for the legendary Enki Bilal on Exterminator 17. Hopefully more of his work will soon be published in English. For now, though, I am very glad to have Jihad. Reading it, I realize it’s the perfect secret post-Soviet graphic novel I was searching for when I first arrived in Russia all those years ago.