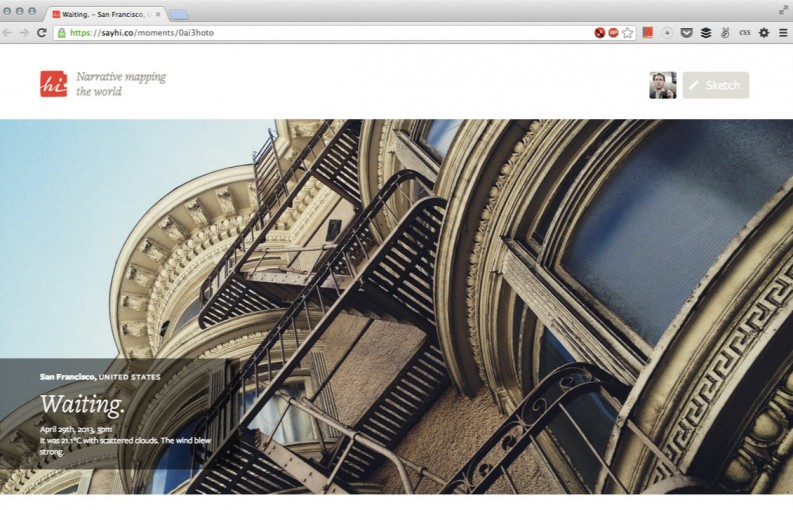 From “Hi: Narrative Mapping the World” by Craig Mod | Medium

First things first. When in doubt, make your new logo some good strong shade of orange.

And, of course, around here at Publishing Perspectives, we wouldn’t know anything about that.

Friday arrives — and thank God it does — with a break from the week’s focus on agent-assisted publishing and something we might think of as tech-assisted storytelling. Maybe not even that: unless Disney has gotten to the peacocks at Bath Spa Uni, those birds are still all-natural (and I’ll bet the sounds they make are, too). I’m delighted to have Kate Pullinger with us today with her report, MIX Making Day: Glitter and Glue, not only because she’s frequently introduced as a “digital author” — and how Disney-automaton-cool does THAT sound? — but also because it gives me a chance to highlight a coming conference, the fourth annual Books in Browsers from Peter Brantley and the Internet Archive, October 24 and 25 in San Francisco.

Both Pullinger and Craig Mod will be speaking.

#BiB13, as we hash it, is a highly specialized conference. As Brantley describes it this year:

Books in Browsers is a small summit for the new generation of internet publishing companies, focusing on developers and designers who are building and launching tools for online storytelling, expression, and art.

And as intriguing as the speakers on his roster can make these things, the whole topic of alternative storytelling, if you will, is one reachy place, unsettling to many.

After avidly covering the two Storyworld Conferences that our great friends at F+W Media has mounted so far — and generally levitating, gesticulating, and moving in as many mysterious ways as possible — I still find that I can clear a post of all readers in about 14 seconds by writing (ready?) transmedia.

Hear them running for the ESC button?

Everybody claims to dislike the term (and they also claim to dislike discoverability), but transmedia is actually one of the better ones going, meaning, simply, any storytelling mode (or cooking contest or tennis match or anything else) that incorporates more than one medium.

Many of our best heads (Jeff Gomez, Lance Weiler, Alison Norrington, Gunther Sonnenfeld, Simon Pulman among them) will tell you that a story’s world, its telling, needs to live logically and productively in each medium involved—as opposed to having a technique or channel or venue of some kind overlaid onto the story artificially. The Silent History was billed as “a groundbreaking novel, written and designed specially for iPad and iPhone, that uses serialization, exploration, and collaboration.”

An interesting entry in the US field lately in this arena was The Silent History — I’d like to offer you this interview by our colleague Jane Friedman of Virginia Quarterly Review, Innovative Serial Fiction in an App, with co-creator Eli Horowitz.

If experimentation and development in new storytelling approaches seem to falter at times, despite the commitment of Pullinger and so many other leaders in the field, it frequently seems to relate to a couple of questions about audience participation — remember that old phrase? Not since a couple of Broadway “rock musicals” tried to get theatergoers onto their feet at intermission have we heard so much about this sort of thing.

From exercises at Sundance in which filmgoers hunt for clues to fictional pathogens that could wipe out Park City to highly “gamified” transactional tales of online personas, the question of “getting the audience to engage” — and then, “but what if we don’t like it when the audience takes over the story?” — can loom large in debates about this kind of work.

This is why I want to call your attention, and that of Bath’s MIX Makers, to a new initiative from our colleague Craig Mod.

Mod calls it Hi. And in his essay at Medium about it, Hi: Narrative mapping the world, he explains the concept. It involves participants in various parts of the world “mapping” their surroundings with their experiences, all thanks to the mobile devices most of us are either enjoying or trying to smash to bits daily.

As a Hi participant, you might take a picture of something, add a little text, then upload it. Later, if you like,  and using more capable machines (maybe with a keyboard more than two inches wide) you can, if you like, create some content of deeper or broader meaning in relation to your initial upload.

The goal of Hi is to narrative map the world. To achieve that goal, we’ve developed, and continue to iterate on, an editorial workflow we think is well suited to networked storytelling. To connecting narrative with place. To building habit. To making a purposeful mess, because the creative process is messy, and our platforms should be okay with that. From “Hi: Narrative Mapping the World” by Craig Mod | Medium

I’m including on this page a couple of the illustrations Mod uses in his essay so you can get a look-and-feel sense for initial uploads via Hi.

The initial nugget of a Hi entry is called a “moment,” and it starts as a “sketch.”

At Hi, we refer to our “pots” — the core units of creative output — as moments. Moments start as sketches. Sketches are comprised of a geographical coordinate, a small snippet of text, and an optional photograph…

A moment rises to the next publishing tier when it’s extended. We recommend extensions to be about 500 words. But they can be as long as you need them to be — ten words or 10,000. Each sketch page has an Extend this moment button. Clicking it opens an inline, auto-saving, editor.

That’s the higher tier of the system I was mentioning.

Notice that in the Hi construct, the delivery media are not overlaid onto the inspiration for the content: on the contrary, the “makers” of Hi are generating each event, themselves, potentially a very pure evocation of transmedial storytelling.

True to these efforts, there’s a willing acceptance built in of some predicatable chaos and dross. Mod writes:

Hi will be filled with stutters, half-baked ideas, doodles, noodles, blurry photos — a bit of that chaos mentioned earlier. But the hope is that from that chaos will emerge thoughtful, fully formed stories, narratives, monologues, missives, and meditations on place, people, and experience that otherwise wouldn’t have existed.

Hi is a generic enough container that it need not be a place solely for capital “L” Literature, or big “T” Travel Writing. We hope for it to also be a place for scientific inquiry, field research, food documentation, shopping notations, journalistic sketching…anything about which location and narrative collide. Another “sketched” “moment” from Craig Mod’s Hi, accessed through Alexis Madrigal’s story on the new initiative at The Atlantic, The Startup as Manifesto.

And that’s it in a phrase: “Anything about which location and narrative collide.”

What Mod is enunciating so well there is the particular storytelling context, that “collision” of narrative and location, in which a Hi moment can occur, be seen by a practiced (or practicing) eye, recorded, noted, maybe estended on the higher tier — a story told.

Many more stories will be told and told before it’s likely we’ll sense much of a handle on the growing field, our narrated world, of non-traditional storytelling being discussed at MIX and at Books in Browsers and on Hi and in other settings.

But at least we’re working at it. And that’s the right story for now. This weekend: tell somebody about it.