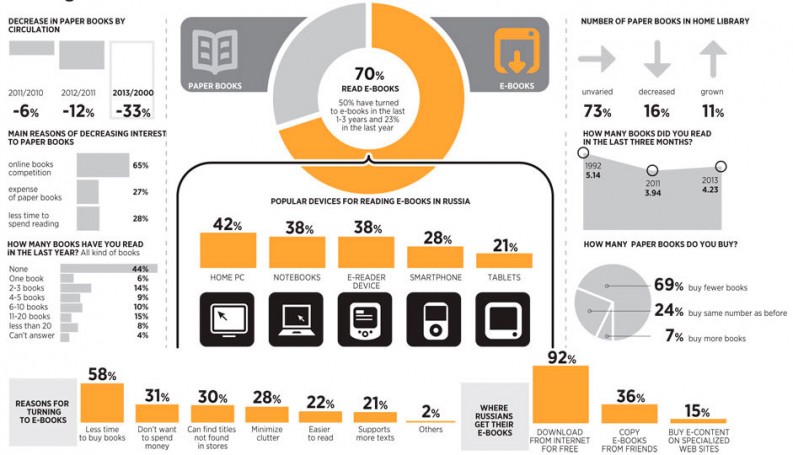 70% of Russia’s readers read ebooks, says a recent study by RBTH, with 50% turning to ebooks in the last three years and 23% in the last year alone.

Despite the recent decline in reading in Russia and the stagnation of the local book market, interest in ebooks continues to grow, as demonstrated by the Knigabayt Ebook Expo recently held in Moscow. A recent infographic released by RBTH, indicates that 70% of Russia’s readers read ebooks, with 50% turning to ebooks in the last three years and 23% in the last year alone.

According to Vladimir Kharitonov, the executive director of the Russian Association of Online Publishers, currently total number of ebook readers in Russia is estimated at 20-22 million people and is expected to significantly increase over the next several years. Most of Russian ebook readers live in Moscow and St. Petersburg, while the number of people reading ebooks in the Russian provinces remains insignificant.

Among the major players in the market are iMobilco, with 20% marketshare, and LitRes, which is dominant and controls 60% of the market. Sergei Anuriev, General Director of LitRes, believes that somewhere between the years 2015 and 2017 the share of the e-book segment in the Russian book market may reach 5%, which will be equivalent to RUB 3 billion (USD $90 million).

Russian ebooks are priced significantly lower than in Western countries. Mikhail Osin, head of digital sales for OZON company, one of the leading Russian booksellers, in contrast to Western countries, where the cost of a typical ebook is estimated at USD$10-15, the equivalent title in Russia sells for about USD$3. Unfortunately, piracy remains a serious problem. According to representatives of Eksmo, Russia’s largest publishing house, up to 95%% of all downloads of ebooks are pirate copies, something at results in the annual losses to the industry of 4 billion rubles (USD$120 million).

Work is being done to stifle the drain due to pirates and is being spearheaded by Rospechat, the state agency that regulates mass media. As reported by Russia Beyond the Headlines, last year the agency launched a media campaign to encourage readers to buy legal ebooks and is now regularly monitoring websites guilty of offering pirated books. As a result, over the last two years more than 25,000 links to pirated e-books have been removed from the Internet.

According to Andrei Yurchenko, a senior analyst at Pro-books magazine, one of Russia’s leading publishing trade magazines, pirated sites remains popular in Russia resulting from the lack of any real competition from companies that distribute legal content: it is estimated that between 100,000-110,000 titles are available in pirated editions, compared to just 60,000 available legally.

“The current situation with pirated content in the Russian e-book market could be explained by the lack of legal alternatives in terms of service, product range and prices,” says Yurchenko. “Once such alternatives will be available, it should go a long way toward solving the problem.”