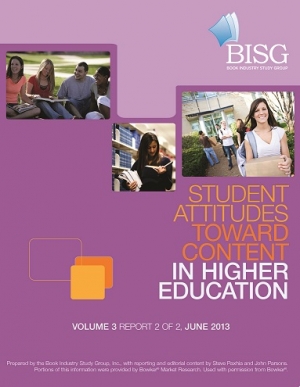 According to new research from the Book Industry Study Group‘s (BISG) ongoing survey of Student Attitudes Toward Content in Higher Education, student use of alternative and illicit course materials is on the rise.

The second installment in Volume Three of the study (powered by Bower Market Research), shows that the percentage of students reporting that they had downloaded course material from an unauthorized website had risen to 34% — up from 20% just three years ago. And over the same period, the percentage of students who said that they had photocopied or scanned chapters of textbooks from other students rose from 21% to 31%.

The report also highlights a survey of higher education faculty. And among the insights into the issues affecting college programs and curriculum is a growing concern among faculty members about value received in return for student spending. For example, 75% of faculty respondents felt that the overall cost of obtaining a college degree is too high (although only 33% felt that education at their own school was too expensive). Respondents also reported that students typically paid $110 for a printed textbook and $58 for a digital one — down just a bit from last survey’s results of $118 and $65. However, they also indicated that both print and digital course materials were priced “higher than their value to the class,” and should be priced at $74 for print and $40 for digital — also a decrease from $79 and $48 last year.

“Exploring the behavior of both the end-user and the decision-maker is becoming far more important as these two groups are both driving market changes,” said Jo Henry, Director of Bowker Market Research, a service of ProQuest affiliate Bowker. ‘It’s an increasingly complex marketplace to predict and respond to.”

To read more or to order the report, click here.