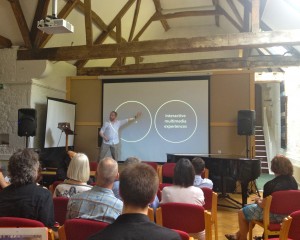 Editor’s note: After our four-day focus on issues around agent-assisted publishing, we end the week closer to the ground, nearer the essential elements of story craft. But in keeping with our interest in how the digital dynamic is affecting things, we’re looking today at a conference in the West Country of England that focuses on experimentation with new storytelling approaches. We’re very glad to have this report from digital author Kate Pullinger on this week’s MIX.02 Conference seated at Bath Spa University. And join us here for a bit of news of a new initiative from Craig Mod after you read up on MIX Making Day. —Porter Anderson

New forms of literature are proliferating.

Text is moving off the page and onto the screen, into hybrid forms that combine the power of narrative with the tiny computers so many of us now list among our closest companions: smartphones and tablets. Story apps, GPS stories, narrative games, community stories, branching narratives, stories that use elements of all these things: the new literatures are compelling and persuasive.

More than anything, they require our participation. For writers who are willing to experiment and collaborate, and for readers who are interested in moving beyond the book and into new reading experiences, the range of opportunities is truly inspiring.

MIX Making Day was one-day experiment in making, thinking, and doing. Located at Corsham Court, Bath Spa University’s Graduate School campus — a Jacobean stately home in grounds landscaped in the 18th century by Capability Brown (yes, you read that right) — the day took place during one of England’s rare heat waves. (We may not have air conditioning, but we have peacocks in our grounds.)

A collaboration between Bath Spa University and The Writing Platform, offered as a standalone day, or as a third-day bolt-on to the MIX Digital conference, MIX Making Day gave participants the chance to get stuck into one of seven different making sessions. The day was kicked-off with a plenary hosted by Naomi Alderman, Professor of Creative Writing and Digital Media, one of Bath Spa’s starry list of new appointments. An award-winning literary author, Alderman is a true hybrid herself, having worked in the independent games sector for many years.

Zombies! Run, the audio narrative running app she co-created with Six to Start, began life as a crowd-funded project on Kickstarter, and has gone on to sell more than 750,000 units to date. With Season Two recently released, Alderman reckons they are on target to sell one million copies of the app by the end of the year.

Currently enjoying a year-long mentorship program with Margaret Atwood, courtesy of Rolex, Alderman is no stranger to transformation. She was working at a law firm in lower Manhattan the day the World Trade Center’s Twin Towers fell, an experience that drove her to give up that life and return to the UK to do a creative writing MA.

Her most recent novel is The Liars’ Gospel, a re-imagining of the life of Christ from the point of view of those around him. Alderman was brought up an Orthodox Jew and had long been fascinated by the notion of Jesus as an unorthodox Jewish boy. The literary distance between running from zombies and re-imagining first century Judea is not as far as readers might think. At an event the previous evening in the jewel-like village town hall, Alderman said that, for her, zombies are the most modern of monsters, the zombie apocalypse a blood-soaked Holocaust metaphor.

With these literary and gaming credentials, Alderman was well-placed to kick off Making Day with a discussion of what she thinks are the three most interesting creative issues to explore through interactive narratives and games:

When Alderman suggested we need a new word, someone shouted “authience,” which, you’ll be relieved to hear was not immediately elevated to a new meme.

The Writing Platform (TWP) sister site of the essential The Literary Platform, launched in February of this year with a competition — funded by the now-defunct UK agency, National Association for Literature Development — for two bursaries to pair writers and creative technologists to prototype new works. TWP, itself funded by Arts Council England, is a website that aims to help emerging and established writers grapple with the complex and ever-evolving digital publishing landscape we all currently inhabit. The response to the competition call was tremendous, and, during the second plenary session at MIX Making Day, the bursary winners demonstrated their work.

James Wheale and Ben Gwalchmai showcased “Fabler,” a mobile app that plays stories in sync with the users’ movements — walk, run, and cycle settings. Wheale pointed out that the barriers to writing interactive works are just as great as those to traditional publishing, and that many writers simply can’t afford to participate in the creative digital space. They plan to develop “Fabler” into an incubator platform for writers who want to develop their own content for interactive apps.

The second team, Caden Lovelace and Laura Grace, have been working on “Invisible Islands”-inspired by Italo Calvino’s Invisible Cities. Lovelace described “Invisible Hands” as a map the size of the world, a “dream archipelago” accessed via GPS, a topography laced with hidden stories.

With both bursary teams, the roles of writer and technologist become fluid, and this blurring of boundaries and shifting of vocabularies set the scene for the workshops that followed.

Corsham Court was buzzing as the digital hive mind came alive up and down its splendid corridors; the tech worked, tea arrived on time, and the virtual glitter and glue sparkled in the unusually intense English sunshine.

Kate Pullinger’s most recent novel, The Mistress of Nothing (Touchstone, Simon & Schuster), won Canada’s Governor General’s Award for Fiction in 2009. Her multimedia digital novel, Inanimate Alice, has also won a number of awards. Her new novel, Landing Gear, will be published in May 2014 (Touchstone, Simon & Schuster). She is Professor of Creative Writing and Digital Media at Bath Spa University, England. More is at www.katepullinger.com