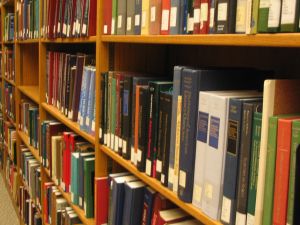 Writing in The Independent, Alasdair Fotheringham examines an unlikely effect of Spain’s ongoing economic crisis: a dramatic increase in the popularity of literature.

He writes that in 2003, Spain (along with Greece and Portugal among EU nations) had the lowest average number of regular readers: just 47% said that they read at least one book a year (compared to 70% in Scandinavia and the UK). But now that number has risen to nearly 60%.

And those Spaniards hit hard by the recession who are wanting to read are flocking to libraries (there’s been a 40% drop of sales in bookstores since 2008). In Andalusia, for example, there has been a 50.6% increase in library borrowers; in some instances, such as in Seville, the increase is 150 percent.

“Above all there are more men,” said Roberta Megias Alcalde, a librarian in a village near Granada, La Zubia. “Whereas before you’d mainly have housewives coming in for novels, now there’s a lot more unemployment and everybody in the household is borrowing books.”

The problem, though, is that drastic government cuts have seen some public library budgets cut by 60% or even more. Fotheringham tells the story of a district library, Las Palomas, located in Zaidin, a working class suburb of Granada. Unfortunately, the library officially closed two years ago, has no paid workers, and with no electricity (with the exception of one cable stuck through a window that goes across the road to plug into a local resident’s power supply) is lit by candlelight.

“We are at a critical juncture,” said Celia Calvo, one of a number of volunteers who helps in her free time to help keep the library working. “The weather is warm now, and there’s long summer evenings, but if we continue with no electricity when the winter dark and cold comes in, it’s going to be very difficult.”

The closing of the library itself was not handled well either, as one of the volunteers pointed out:

“‘That girl over there, Marta,’ — a six-or seven-year old girl doing her homework at one of the low tables for children — ‘was in the middle of filling in the form for her first ever library card when a phone call came through telling the librarians to close the doors and ask everybody to leave.’ A sit-in protest 10 weeks later at the doors of Las Palomas, to try to ensure its books and shelves stayed, concluded with police lifting away each individual demonstrator, several of them pensioners chanting pro-democracy slogans. But the books went too — in a removal van to the new library.”

(A new library had been built on the far side of town, but it was too student oriented, difficult to get to, and was didn’t fit the needs of the resident of Zaidin, one of the poorest areas of Granada. Supporters of Las Palomas also point out that regional laws specify that the population of Zaidin should have two libraries, not just one. And, as Las Palomas volunteer Encarnacion Gonzalez Martin pointed out, “This library is small and can’t can’t cope with all the district, it’s vast. And we supported the opening of the other one — but on condition this library wasn’t closed.”)

But the library quickly reopened after the governmental closing thanks to the efforts of volunteers, 8,000 books donated by local families, and furniture, shelves, and potted plants from nearby schools.

Las Palomas is not the only library to feel the pinch of governmental austerity. In Guadalajara, where the library’s book budget shrank from 150,000 Euros to zero in 2012, locals are funding all new purchases; and at the Josep Pons library in Barcelona, volunteers are handling day-to-day operations.

And thanks to the efforts of devoted volunteers in Zaidan, Las Palomas is once again a central and vital part of the community.

“There are children from families who come here because at home they would never have the opportunity to read books, they don’t have the economic or cultural resources. Maybe they’re a bit more reticent at first, but they know where their shelf is, they end up taking the books home.”