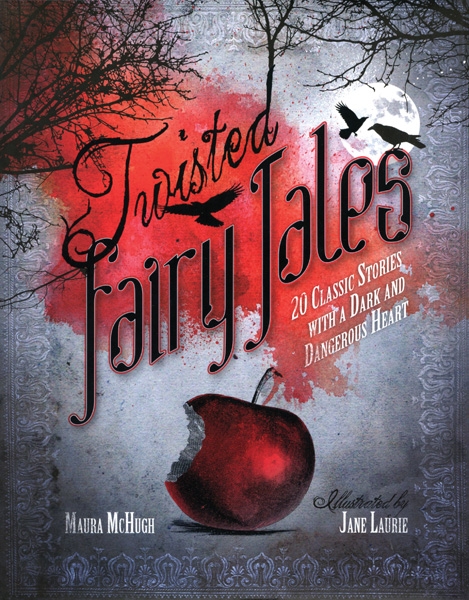 As Joan Didion once famously wrote, “We tell ourselves stories in order to live.” And among the most famous of those stories are the classic fairy tales of Grimm, Perrault and others, stories that when we’re young help us to make sense of the world, and when we’re older, remind us of what it’s like to be young and trying to making sense of the world.

And for those who prefer their fairy tales on the dark side, more Grimm (and grim) let’s say than Disney, I’d like to point you in the direction of Maura McHugh’s wonderful collection, Twisted Fairy Tales: 20 Classic Stories with a Dark and Dangerous Heart (Barrons). With wonderfully gothic (and goth) illustrations by Jane Laurie, McHugh’s fascinatingly dark, feminist and yes, twisted versions of fairy tales I thought I knew kept me awake and turning pages late into the night.

Consider this, for example, from “Snow White”:

Suddenly determined, Annabel picked up the silver comb from her dressing table and stabbed it into the heel of her palm. A row of ruby blood beads emerged on her white skin.

She flung the offering onto the mirror’s surface and lifted the mirror with her aching hand. She could feel the rustling of the flowers in the handle and the quiet murmur of voices from those that dwelled within. Then she uttered:

‘Mirror, Mirror, tell no lies,
Will my child live and thrive?’

The blood on the glass slicked across to form a thin red surface. Tiny faces and mouths swam inside the pool. They spoke in a single chorus of shrill voices:

‘Your child will be hale and healthy,
Your husband secure with love’s fidelity.’

Annabel released a long sigh. At last, she could rest easy. But the mirror stirred under her hand, as if it had heard her thoughts.

‘Beware, lovely Queen, prettiest of them all,
Your reign will end when your beauty falls.’

The baby kicked in her belly, causing Annabel to start.

I recently had the opportunity to speak with the author about her book.

PP: What draws you to fairy tales? Have you always been interested? Maura McHugh: Fairy tales made a profound impact upon me as a child. They simultaneously attracted and disturbed me. When you are a child there is a vague sense of the greater world that you don’t yet understand, and a burgeoning prescience that things do not always end well. Fairy Tales are instructive: they are about people who face monsters and challenges, but battle through them. Yet, not everyone survives intact. Fairy tales are also magical and fantastic, which fired my imagination. I often thought about the characters long after I read the stories, pondered their choices, and imagined what happened to them after the stories ended.

What were you looking for when selecting stories? Was it a conscious decision to feature stories with female heroines?

The selection of the stories was the result of a reasonable negotiation between my publisher’s requirement to have some of the better-known stories represented, and my desire for a diverse selection of themes and narratives. The tone of the stories was deliberately pitched to young adult, and I was aware that the material would likely appeal strongly to girls and women. There is a wide array of heroines in fairy tales, so it was appropriate to reflect that in the table of contents. Yet, there are plenty of male figures in the stories, and there is a good balance between male and female heroes and villains.

How would you say your interpretations changed the stories?

I tried not to change what I considered the essential elements of each fairy tale, but I did update them to reflect a modern sensibility. Sometimes Fairy Tales were (or were adjusted) to be a type of morality story: to instruct the young in appropriate types of behaviour. We don’t live in the late Renaissance or the 19th century any more, so I tweaked the more overt preaching. There were plenty of macabre elements present in most of the stories, so I heightened them if appropriate. Mostly, I aimed to write entertaining, dark stories that a modern audience would enjoy.

I’d be hard pressed to pick a “favorite” — I loved Snow White, The Bone Whistle, Vasilisa’s Fire, May and the Elf Knight…and more, but do you have a favorite or one you respond to the most? And why?

I loved Molly Whupple. Her character came to me immediately from the first paragraph. She’s fierce, brave, and protective of her sisters. Plus, she’s clever and fun. She’s not invincible – which is boring – but she throws herself fully into adventure. She became a heroine of mine through the writing of the story.

Could you pick one story and take me through your creative process?

Some of the stories offered creative challenges. Sleeping Beauty is difficult because the person who – on the surface – is the protagonist of the story is actually passive throughout most of the narrative. Generally protagonists drive the action, but Princess Talia is acted upon: she succumbs to the curse and sleeps throughout the story. I had to consider how to approach the re-telling when the main character is out of action for most of it. So, I looked for someone who would be present throughout the story, and I gravitated to the Good Fairies who witness the baby Talia being cursed. So, in some ways Gillyfloss, the youngest fairy who alters Talia’s curse, is the prime shaper of the story. She’s Talia’s caretaker, and encourages a decent suitor to fall in love with Talia prior to even seeing her. Yet, what happens after Talia wakes up? I didn’t outline a wedding, merely a wakening. After that it’s up to the reader’s imagination to create their future.

A sequel, Twisted Myths: 20 Classic Tales With a Dark and Dangerous Heart, will be published in October.