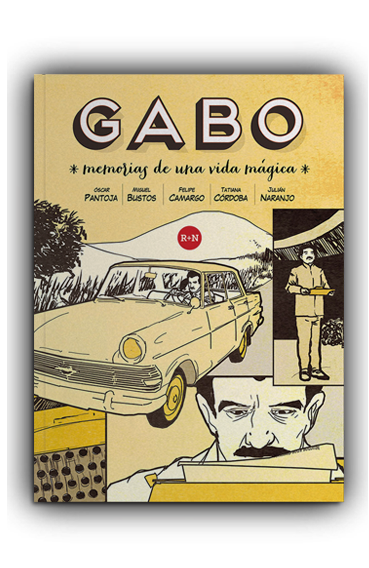 It couldn’t have come as a bigger surprise: just weeks after filing a lawsuit against the Constitutional Court in September 2012, lobbying for graphic novels to be covered by the Colombian Book Law, a group of Colombian illustrators received the news that the Court had agreed to amend the law, thus freeing graphic novels from high taxes — 16% vs. 0% for books, magazines and serialized publications — which had stymied the industry for so long.

Between 2008 and 2010, only 8 comic books titles were registered at the Colombian ISBN Agency. It was a horrendous situation, compared with that of, say Spain, which despite a massive economic downturn, still registered 1,766 comic books in 2011 and printed some 15 million copies.

Among the claimants were John Naranjo, Colombian graphic designer, who along with his his wife, the film maker and photographer Carolina Rey, are publishers of Rey+Naranjo Editores. “In the end we all got what we were looking for: the legal acknowledgement of comic books and graphic literature as legitimate cultural products,” says Naranjo.

Naranjo’s advocacy for graphic literature, though, was motivated by an ace up his sleeve. Long before setting up his publishing house, Naranjo worked as an advisor for the book publishing branch of Colombian newspaper El Tiempo which had wanted to publish illustrated biographies of key Colombian cultural and historical figures.

The first biography planned was that of Gabriel García Márquez, winner of the 1982 Nobel Prize for Literature. Naranjo began working on the text along with Colombian writer Oscar Pantoja, an expert on the Nobel Laureate’s work. In the end, the project was finally not accepted by El Tiempo, so the draft languished until 2009 when, while studying in Boston, Naranjo saw a copy of Exit Wounds, a graphic novel by Israeli-born illustrator Rutu Modan (translated in Spanish as Metralla), in the comic book section of a local bookshop. “I immediately said to myself `I want to do exactly what they do.'”

When he was back in Colombia, Naranjo phoned Pantoja, and they resumed work on the manuscript. They enlisted illustrator Miguel Bustos to give visual life to the script. Bustos was overwhelmed by the project´s magnitude, so in order to have the comic book ready for a launch at Cartagena Hay Festival in January this year, Naranjo hired three additional illustrators (Tatiana Córdoba, Felipe Camargo and Julián Naranjo) to collaborate on the project.

“From the beginning we were aiming at the international market because Colombia does not currently have a market for graphic literature. We have already sold the rights in Spain and the translation rights for the Catalan publication are underway. We have even received letters from four French publishing houses, one of them the publisher of Garcia Marquez in French, who wants to publicize it as ‘the book of the year'”, Naranjo says. (Rights for the work in Anglophone countries are being handled by German literary agent Nicole Witt, of Mertin Agency.) Rey+Naranjo has also expanded into distribution, handing books for Spain’s Sins Sentido (from which they also acquired the rights to publish the Eisner Award-nominated graphic novel Chico y Rita by Javier Mariscal and Fernando Trueba) and Mexico’s Elephas. An interest in LGBT issues lead them to contact American cartoonist Alison Bechdel, who authorized Rey+Naranjo to distribute her graphic novel Fun Home: A Family Tragicomic in Colombia.

Graphic literature: from underground to educational

Despite advances, according to Argentinean cartoonist Daniel Rabanal, the comics and graphic novel business lags behind that of other countries in the region, such as Argentina, Mexico, Uruguay, Brazil and Cuba,

Although the situation started to improve during the ’80s and ’90s with the development of specialized magazines, newspaper supplements and more visibility at local book fairs, graphic literature was still viewed as an underground activity. Alas, in this way, Colombia is not so different from other countries: it took award-winning books, such as Art Spiegelman´s Maus (1991) and Alan Moore and Dave Gibbon´s Watchmen (1987), to raise the sector’s profile in the English language market, for example. (See Becky Barnicoat’s essay in The Guardian for further reference).

As attitudes have changed, comics and graphic novels are now seen as an important gateway for young readers, particularly those still in school. Psychologist David Rapp, writing on Reading with Pictures, believes that “comics literacy” (understanding panels, thought bubbles and the graphic passage of time) helps readers develop a key form of critical thinking.

Naranjo, too is convinced of the advantages that comic books offer to both children and adults alike: “They are the port of entrance to the highest reading abstraction which is reading a novel and all those little black smudges on the white pages. Graphic novels have a lot to put in; both writers and illustrators can explore and make use of lots of languages to craft sophisticated works.”

Talent is there, but publishing education is needed As founding members of the Independence Route at the Bogota International Book Fair, Naranjo believes “co-petition,” instead of competition, between local illustrators, designers and publishers will play a key role in allowing the graphic literature subsector to consolidate and now and work on collaborative projects. “There’s a foundation called El comic en línea, where you can browse through recent publications, and there is also an illustrator´s community called Ilustradores Colombianos,” says Naranjo, adding “These are only the first steps but there is a lot of talent for creating local graphic literature in Colombia.”

Though optimistic about the current wave of independent publishers sprouting up in the country, Naranjo notes that there are still gaps in how the publishers access and set to work. “There is a lack of local education resources in publishing. Independent publishers are still very short on selling rights, contracts and distribution issues.” However, the recent launch of a Diploma in Publishing Studies by the Instituto Caro y Cuervo, a government research body on literature, history and linguistics, may pave the way for bridging the gap.

As for future projects, Rey+Naranjo is very keen to keep working on illustrated biographies, following the success of Gabo. “We are working on the biography of another great Latin American writer, it will be a complete hit and we believe it will outsell the Gabo biography. We hope to have it for Frankfurt or at least for Guadalajara,” says Naranjo. They are also working on two comic books featuring subjects Colombian history.

Naranjo notes wryly that focusing on Latin American and, specifically, Colombian content, may be commercially limiting. “Maybe if we published an illustrated biography of Metallica or of Kurt Cobain we would have readers running after us.” But, he adds, he aim is as much to give a boost to Colombian culture, as it is to make a dollar. “Our aim, I think, should be to focus on exploiting our national heritage. We need to show Colombia to the rest of the world.”

Andrés Delgado Darnalt is a Colombian journalist who has worked with the Colombian Book Chamber, the Iberoamerican Publishers Association, the Museum of Fine Arts — Houston and the Fundación Gilberto Alzate Avendaño. He lives in Bogota. You can follow him on Twitter at @andeldar.