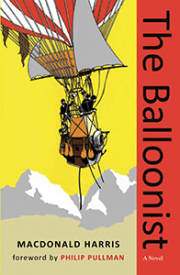 Many book prizes and literary awards honor recently published titles, but the UK’s Folio Prize has come up with a way to highlight titles from the past as well.

Starting this week, the Folio Prize — the £40,000 prize for fiction published in the UK — taps into its distinguished Academy of writers and critics to bring attention to “books that could have been worthy winners of the Folio Prize had it existed in the past.”

Every day, from July 8 to 16 (when the panel of judges for the 2014 Folio Prize will be announced), a member of the Academy will present their chosen title and why it should have won the Prize. You can follow the selections online at From the Academy.

The first two titles have already been featured on the website.

On Monday, Philip Pullman chose The Ballonist by MacDonald Harris. “Steampunk crossed with Proust, almost. Ironic, funny, tragic, sexy, and written in the most beautifully intelligent prose. Well worth a prize,” wrote Pullman. Tuesday, A.L. Kennedy selected Party Going by Henry Green: “Its evocation of a fog-locked pre-war London is crackling with atmosphere, at once deeply real and deeply dreamed, disturbing.”

Suzy Lucas, Administrator, The Folio Prize, said: “One of the chief ambitions of The Folio Prize is to give people the opportunity to find great books that might otherwise lie unread. Our Academicians’ choices do exactly that — they date from 179 A.D. to the present day and take in all manner of forms, styles and preoccupations. We challenge anyone not to want to read them all whether they be undiscovered or simply worth rediscovering.”