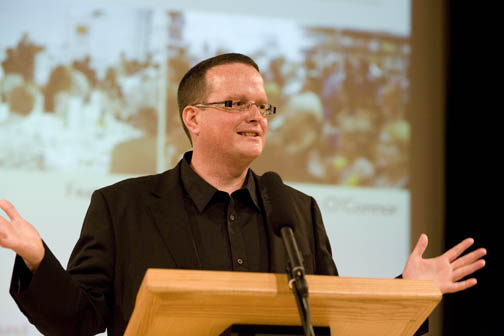 Late last month during the Worlds Festival in Norwich, the Writers’ Centre Norwich (WCN) launched a new English-language translation of the UK’s only medieval Hebrew poet Meir ben Elijah, or Meir of Norwich. Little is known about the poet and the manuscript of his poetry was missing for about 600 years, only to be rediscovered in the Vatican’s Archives in the 19th century and now, revived by the county’s literature development agency, working in collaboration with local writers, translators, academics from the University of East Anglia and UNESCO.

This is one of the first projects that the WCN and UNESCO are working on together since Norwich was announced as a the world’s sixth city of literature in May 2012. “It’s part of celebrating the city’s heritage,” says WCN Chief Executive Chris Gribble. “Norwich has always been outwardly engaged. The city welcomed waves of immigrants and in the 17th century, the city’s main language was French.”

From the Worlds Literature Festival to working with counterparts in Kampala to help their bid to become the first UNESCO City of Literature in Africa to helping the Tokyo International Literary Festival with access to J. M. Coetzee, the WCN nurtures international networks of writers and literature programmers across their activities and this keeps them at the fore of literature development in the UK.

A Private, Curated Space for Writers

This year, authors Evie Wyld and Neel Mukherjee returned to the Worlds Literature Festival to participate in a week of conversation, readings and networking with a group of other global writers, including Sjón, Elif Shafak and Tash Aw.

When the program started in 2005, Gribble says, the aim was to create a curated space where writers could meet to talk about writing and to develop a supportive network — something that wasn’t present in the usual circuit of literary events and festivals. Of her experience, Wyld says, “I’ve made several solid friends from WCN and it becomes a really supportive network. By the end of it I’ve always felt a broadening in what I’ll go on to read and also in how I might approach my writing.”

Neel Mukherjee, who participated in Worlds for the third time, says that because author participation isn’t pegged to publicity, it frees writers into concentrating on bigger themes and ideas. “We don’t rely on front list authors,” Gribble concurs, “so we can curate in some depth. During the week, the invited writers explore themes together with a range of writers, thinkers, teachers, academics from around the world.

Mukherjee says, “You don’t have to go to China to take the pulse of cutting-edge thinking among writers; China comes to you. As it were. Then there is the whole business of being kept on your intellectual toes from 9 a.m. to 12:30 p.m. every day. This is the segment of the day when the most unique thing about Worlds happens: a discussion, around a set theme, among all the invitees, gathered in a seminar room. Each is sparked off by a ‘provocation’ given by one of the invitees. When JM Coetzee is talking on ‘The Authenticity of the Imaginative Process,’ you do not sit at the back of the class, rolling paper pellets. It is an intensely educative experience; and deeply pleasurable too. You can almost feel and see your mental horizons expanding.”

In the evenings, the Worlds program opens up to the public with a series of events including an exploration of Tove Jansson’s legacy, readings from international writers and the Norwich launch of Granta’s Best of Young British Novelists.

The festival is of course only one aspect of the centre’s engagement with the city’s literary present and past. In March 2012, the WCN hosted a showcase for literary program managers from around the world in partnership with the British Council and the Arts Council, asserting the importance of international engagement for the development of British literature. Similar to the writer’s “private space” to explore ideas at Worlds, the showcase provided a similar atmosphere for international literary programmers such as the British Centre for Literary Translation, Toronto’s Luminato Festival, and Literary Death Match.

Also in March 2012, the WCN was awarded what is thought to be the biggest grant for literature awarded by Arts Council England’s Capital Investment Programme fund. The three million pounds will be in aid of developing the International Centre for Writing (ICW) in partnership with Norwich City Council, University of East Anglia and Norfolk County Council. Expected to open in April 2016, the partners are working hard to meet a total campaign target of seven million pounds for the proposed world-class center for creative writing and the world literature. The ICW and the success of the UNESCO bid and indeed the founding of the centre itself lay in a “shared belief that writing and the arts improve an individual’s and the community’s experience of the world.”

Though this shared belief has led to a number of dynamic partnerships and brought ground-breaking projects to fruition, one challenge that Gribble identifies not just for the center, but for the literary community is the lack of an established philanthropic base for literature, comparable to that of the subsidies and prizes for the visual and performing arts. Considering that literature is “our national art form” Gribble asks, “how are we supporting our writers philanthropically?”

In a city of literary firsts — where Julian of Norwich’s work became the first book by a woman published in English and which was the first City of Refuge in the UK — one imagines that in this center of innovative thought and action, a solution is brewing.