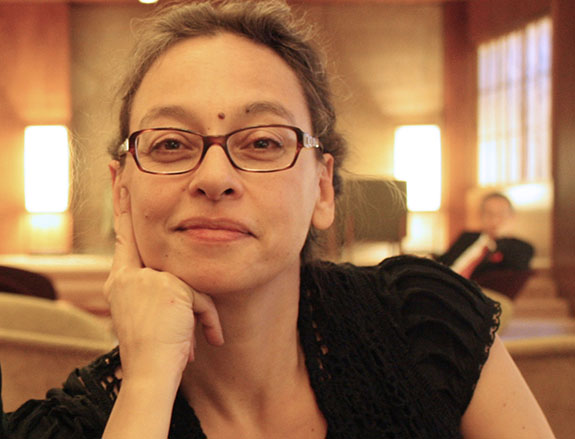 Nicole Aragi is a literary agent extraordinaire, one whose client lists includes Junot Diaz, Aleksandar Hemon, Edwidge Danticat, Colson Whitehead, Julie Otsuka, Jonathan Safran Foer, Nathan Englander, and Chris Ware. According to Jonathan Lee, “Whatever the proper collective noun for geniuses is (Google suggests a ‘bevy’ or a ‘savvy’) Nicole Argai has proved herself to be unusually adept at finding them.”

As Lee points out, “The success of her authors has made Aragi a hallowed name in literary circles. Writers want to be represented by her, and publishers’ pulses quicken when her name flashes up on their phones.” Aragi recently sat down with Lee for a wide ranging interview for Guernica magazine. Some highlights:

Guernica: …it feels like a lot of people in the publishing industry are worrying about poor sales for good quality fiction. That’s nothing new, perhaps, but it does seem like moment-to-moment trends determine more than ever what’s successful. E.L. James sells well, so suddenly there’s loads of erotica on the shelves. Harry Potter sells well, so we get a few years of child-wizards. Scandinavian crime, dragon tattoos, Harvard symbologists. Do you sense a sense of pessimism among publishers about the sales for literary fiction? I wonder if it’s worse back in London – they seem to me to be more pessimistic there.

Aragi: The situation with book sales in England is, to tell the truth, pretty awful. I think after the Net Book Agreement collapsed, everything moved too fast. There wasn’t a chance to settle into a system that made actual sense. The discounting of books in England is insane. An editor in England told me once, “I’ve got to go and explain to an author why his new book is selling more than his previous book but he’s earning less.’ In England, it was fixed prices on Tuesday and no fixed prices on Wednesday. Decisions were made in a rush and got set in stone. That was disastrous for the industry there.

Here in America, there have never been fixed prices on books, and the negotiation between publishers and booksellers feels to me like it has evolved over a slower period of time. That’s better for everyone, including authors.

Aragi: Yes. It’s difficult. I don’t know what the solution is. We should have more works available in translation. I think one problem is that I don’t read in other languages, and that most agents don’t either. If you can’t read a book in its original language and form a view on it, then that’s the first barrier. You need to find a reader in that language who you can absolutely trust, but even then, where is the personal response you need in order to know you really love something?

Then there’s resistance on the part of the publishing houses. There’s a belief that readers are far less likely to buy a book that has “translated by” on the cover. The feeling is that readers will see those words and think the book is more difficult, less enjoyable, than something originally written in English. That they’ll think of it as homework rather than reading pleasure. There are exceptions, of course. “The Dinner” by Herman Koch, for instance, did very well recently. Sometimes situational novels in translation can succeed, I think. People could identify with “The Dinner.” They thought: what would I do if I realized my son was doing this dreadful thing? There’s enough in that to make people talk about the book, and once people are talking about a book half the battle is won.