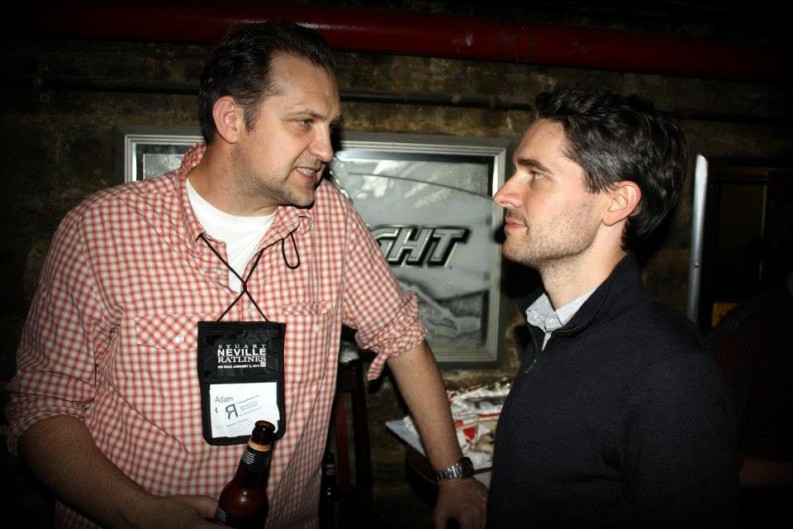 Movable Type’s Adam Chromy, left, and Jason Allen Ashlock were in Cleveland in October for the launch party of The Rogue Reader at the 2012 Bouchercon World Mystery Convention.

The writings editors love most in a journalistic setting like Publishing Perspectives are the kind that produce logically prompted questions. In my week as guest editor here, I couldn’t ask for a better example of this than Movable Type’s Jason Allen Ashlock’s and Adam Chromy’s gracefully rendered essay today, The Agents’ View: A Case Study in Agent-Assisted Publishing.

Ashlock and Chromy began conferring on their idea of an agency-managed collective of self-publishing authors–of “fiction from the bleeding edge” — around the time of BookExpo America (BEA) 2012, roughly June of that year.

One year later — and almost two years after Ashlock wrote his Argument Against Agent-Publishers with which we started our Interrupted Debate focus this week — these literary agents are, yes, agent-publishers of a kind.

And they are today easily two of the very best-informed among us in these new and daunting arts.

If you haven’t had a chance to see it, Ashlock left a poignant and gracious comment on Monday’s first story in our series:

I just want to say briefly that my thinking has changed quite a bit since that article of nearly two years ago–as, of course, the landscape has changed remarkably too. As various agencies have launched into digital publishing I’ve been proud to see conscientious, innovative effort from my peers. (Specifically, as I’ve gotten to know [Scott] Waxman’s Diversion Books, I would considerably revise my reference to them in that now-ancient piece! Diversion’s providing an excellent service and I’ve become a frequent endorser of their work.)

Not that he needed to say it. Who hasn’t revised her or his thinking since the fall of 2011? Since lunchtime yesterday? The speed with which our industry is being changed and re-changed is its own wonder. The Rogue Reader’s Ro Cuzon talks with author Sean Chercover in a promotional video produced for the project.

And this is what makes the Ashlock-Chromy piece all the more valuable to us. As if those sailors Ashlock-2011 mentioned on Theseus’ great ship could have floated warning buoys in their foaming wake to us, Ashlock-2013 and Chromy have arrayed a series of flags bright flags for us—some of them as red as The Rogue Reader’s big R.

Will we heed these warnings?

Seasoned observers of publishing and the place of agents in it under the pressures of the digital dynamic will have readily picked out some of the fluttering ensigns that Ashlock and Chromy are running up for us in the wind.

Here are a few that catch my eye:

Now, needless to say, within about 90 minutes, we could probably produce a different set of bullets. Is this industry a ship or a raft in white water?

But we seriously must take a moment to look at these and other elements of what Ashlock and Chromy are telling us. We can’t afford to look away, to assume that “we’ll do it better,” to think “the situation has already changed”—actually, it’s not that fast a tide: this interpretation was delivered to me yesterday, July 16.

For a moment, as this story publishes, we are of our moment. Take that chance. Pause.

What do I take from this?

My biggest concern is the difficulty the Rogue had in finding new books for its curated niche of the required high level of quality it had established as its promise to readers. This, I fear, is reflective of a sea-deep problem underlying much of the speed with which publishing is moving. It makes me doubly grateful to Ashlock and Chromy for holding out for strong material, not caving to something lesser.

Before our week’s focus gets away from us, in fact, I’d like to mention the other four authors of the project, the Rogues whose writings did meet the standard. Cuzon’s fellow Rogues are Mark Conard, Michael Hogan, Don Reardon, and Edward Weinman.

And while the lessons these authors and their agents bring back to us after a year of Rogue-ish experimentation may not all be upbeat, we’re indebted to them for creating an unstinting effort to create and float a curated collective of self-publishing authors guided and managed by their determinedly engaged literary agents.

We’re lucky to be able to finish with Ashlock, Chromy and their authors. Because even if The Rogue Reader hasn’t landed exactly where they might have wished, at least these colleagues made the trip.

What do you think are the main takeaways from The Rogue Reader? Drop us a comment if you will, and thanks for joining us in our focus this week on these issues.