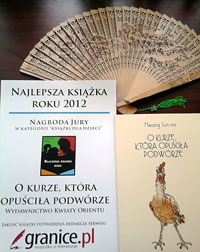 On Tuesday, Daisy Larios examined the ways in which South Korea’s increasingly multi-cultural population will impact its publishing industry. And in a somewhat related story, The Korea Herald reports that Poland now has its own publishing company devoted to introducing the literature of Korea to a Polish readership.

The company, Kwiaty Orientu, was founded by Marzena Stefanska in 2007 when there were only 15 Polish-language books about Korea available in Poland. Stefanska, who had studied Korean literature at the University of Warsaw originally planned to work as a full-time Korean-Polish translator, but instead decided to found a publishing company after she found it impossible to find publishers interested in her own translated works.

She has since published 20 odd works of Korean literature in Poland, including books by noted authors Kim Young-ha (Whatever happened to the Guy in the Elevator?), Hwang Sok-yong (The Land of Strangers) and Shin Kyung-sook (“I’ll Be Right There”), and the books have been getting noticed.

The Polish edition of Hwang Sun-mi’s children’s novel, Leafie, a Hen into the Wild, published by Kwiaty Orientu with the support of the Literature Institute of Korea, (see our previous article on Korean literature abroad) was named the “Best Book of Spring 2012” as well as “Best Book of the Year 2012 by Granice.pl, a renowned Polish online literary organization.

Stefanska told The Korea Herald that she pays special attention to Korea’s women writers such as Gong Ji-young,and Oh Jung-hee, and that one of the highlights of her career as a publisher was Shin Kyung-sook’s visit to Poland in 2011 while on a promotional tour for her international bestseller, Please Look After Mom. The Polish edition of the novel was published by Kwiaty Orientu.

Just last month the Polish edition of Gong’s novel Our Happy Time was published by Kwiaty Orientu. The 2005 book, a huge critical success in South Korea, tells the story of a convicted murderer on death row who strikes up a friendship with a wealthy albeit suicidal young woman, and has received a great deal of notice in Poland.

“The book has been receiving a lot of attention from the local press in Poland even before hitting bookstores,” Stefanska said. “I think it has a lot to do with the subject matter. [The] death penalty is an international subject. It’s been talked about on the news. There are films about it. And the novel’s own film adaption is certainly useful when it comes to marketing in Poland.”

But while Stefanska says that there is a growing interest in the Korean language in Poland, that interest is not necessarily focused on Korean literature.

“People are interested in working for LG or Samsung,” she said. “But there aren’t that many Korean-Polish translators in the country. Korean cultural institutions in Poland should pay more attention to promoting Korean literature, not just K-pop.”